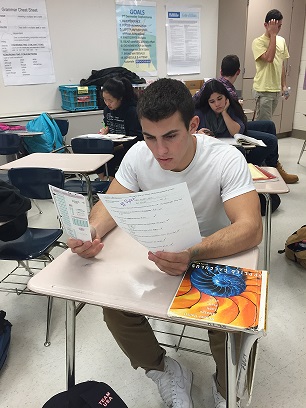 Some CHS teacher change tests from previous years to prevent new students from using them. Whether this is resourceful or cheating is up for debate.

By Jordan Janis and Katherine Michael

In a school known for high academic achievement and pressure, students have found an alternate, controversial way to prepare themselves for assessments: using previous years’ assessments to study for future ones.

In an Observer survey of 40 random students, 10 from each grade, over half of the students surveyed claimed to use quizzes from previous years to prepare for their upcoming assessments, sometimes because the teachers do not change the tests, and other times to better focus their studying.

“There is a lot of pressure to do well on every single assessment, and when you have three or four tests in a day, it is a lot easier to study the questions that you know will be on the test instead of all the material,” said a senior girl who wished to remain anonymous.

Despite the fact that students have access to previous assessments, teachers do not always change quizzes from past years because of the effort required to create new tests.

“The reason some teachers might not remake tests is that it’s really hard to come up with a set of questions that you’re willing to use,” social studies teacher Evan Rosenthal said. “It takes a while, and it’s hard to do.”

As the class level increases, especially with AP classes, the difficulty of making tests increases, as teachers try to mimic the ways in which College Board asks questions on the exam.

According to social studies resource teacher Rodney Van Tassell, it takes hours to create a good unit test because of research in choosing sources that are acceptable for all reading levels.

“It is difficult with AP classes as we try to expose students to released AP questions from College Board,” Van Tassell said.  “College Board limits the number of questions they release, so the assessment bank is not very large.”

Teachers have developed various methods to prevent students from having exact replicas of previous assessments.  Some teachers vary the numbers and order of questions so that they are not the same, while others create completely new assessments each year.

According to Principal Joan Benz, teachers often maintain “question banks” and rotate questions from these banks.

According to Van Tassell, the AP U.S. History team changes its tests by rotating the topics that they ask in selected response and written response questions each year.

“It is impossible to prevent students from using quizzes and tests from previous years,” Van Tassell said.  “Teachers need to be aware that this happens and use different versions of assessments if applicable.”

However, because of the difficulty of creating new tests, many students’ study tools, which they receive from older friends and siblings, are exact copies of the tests for which they are studying.

“I have usually received the same test that I have studied from,” the senior girl said.  “If it was different, it was usually the same questions with different numbers or in a different order.”

According to a sophomore boy who also wished to remain anonymous, he frequently uses previous math tests because the teachers do not usually change them.

Whether because of the difficulty of creating new tests at higher levels or because of easy access to former students’ work, studying using previous assessments tends to increase with grade level.

According to the survey, only two of the 10 freshmen have studied using previous tests, while nine out of the 10 seniors have prepared with this method.

According to Benz, studying using previous exams is common and accepted in college.

“Sororities and fraternities have files of assessments from their present and past professors to which their members refer as a study tool,” Benz said. “When you look at an old exam, it gives you an idea of what the professor emphasizes. I would not say that the students were cheating.”

Many students also believe that this method allows them to better focus their studying.

“It helps me study, not necessarily memorize the answers,” the sophomore boy said.  “I don’t think it is a problem because I use it more just to see what to focus on when studying.”

Others, however, view this study tool as a form of cheating.

“It would be academic dishonesty in my world,” math teacher Heidi Neto said.  “I would probably take it to the next level by bringing it to administration for discussion.”

According to Benz, when teachers do not change exams, they create an “unequal opportunity setting for students.”

“The clear message to teachers is do not use old assessments,” Benz said.  “Develop new quizzes and tests so that each student has equal opportunity.”