5K’s for the summer 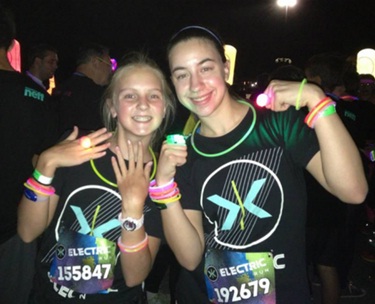 If you want to get in shape but think of running as a strenuous, boring activity, think again. 5Ks are the perfect opportunity for getting your cardio workout in while having a blast with friends in a fun environment. Several unique 5K races are coming to the DC area soon. The Observer has compiled a list of exciting races in the area that might just change your mind about running.

This nighttime 5K race will electrify you. Wear neon attire and anything that glows so you’ll fit in with all of the glowing tunnels, lights, and psychedelic patterns that decorate the course. The course runs through several different “courselands” that include “Electro Rainforest,” “Under the Sea,” “Rainbow Road” and “Electric Avenue” and ends with a finish line celebration that resembles an EDM concert. Registration for the July 19th race is still open. If you can’t make this one, another nighttime run is “The Glo Run” on Aug. 2.
2. Run or Dye:

Run or Dye is coming to RFK Stadium May 24. With several dye stations and a big “Dye Zone,” this 5K is sure to be colorful. Wear white and be prepared to get messy! Individual tickets are on sale for $57 and team (4+ runners) tickets sell for $52. A similar race, The Color Run, is coming to DC Sep. 28.

Although this isn’t a 5K, it’s an annual tradition at our school. Created in 2010, this run consists of running four miles to the Chipotle by WJ, eating a delicious burrito, and sprinting all the way back to CHS. Currently, social studies teacher Paul Jacobson holds the record of 56 minutes. The fifth annual Burrito 8 Mile is on May 30 at 3 pm.

The Zombie Race is a 5K and 15K race with a plethora of obstacles—some of which are undead. This apocalyptic race requires a lot of running, climbing and crawling. An individual ticket sells for $85, and if you are willing, you can buy a $35 ticket and work a zombie shift and chase runners. The Zombie Race is on June 21 in Monkton, MD.

The R.O.C. Race, which stands for the “Ridiculous Obstacle Challenge,” is coming to RFK Stadium June 14. The game show-inspired run features 12 huge obstacles such as the “Wrecking Ball” and the world’s largest inflatable water slide.