Assembly warns seniors ‘Better to be Safe than Sorry’ 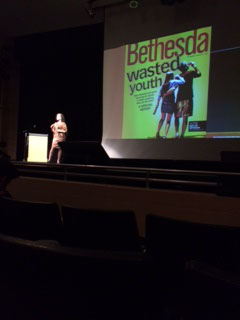 With the notorious prom and beach week creeping up on students, CHS is working to raise drug and alcohol awareness through a new campaign that teaches seniors that it is “Better to be Safe than Sorry.”

Local psychiatrist Susan Rich started The Better Safe Than Sorry (BSTS) campaign in order to raise awareness about the dangers of alcohol, and in particular, the consequences of drinking while pregnant. Rich presented to seniors April 2, and discussed the dangers of substance use as well as the struggles of transitioning from high school to college.

“‘Better Safe Than Sorry’ was originally developed as an educational curriculum for science and health class that was a spin-off project from a documentary I produced in medical school,” Rich said.

Rich first began working with CHS by running a series of focus groups primarily comprised of student volunteers, or “change agents.” These agents are training to become interns on the project and will assist in Rich’s CHS presentation, as well as continue to develop the project over the summer.

“By including teens in the ongoing development of the project, it will take on a life of its own and become much richer and more meaningful to the students who participate than if they were not a part of the development,” Rich said.

Senior change agent Carlye Hillman, who is in charge of coordinating focus groups, first became involved after being contacted by Rich.

“I would describe the program as a way of preventing teenagers from what alcohol and unprotected sex can do to not just you, but what can happen afterwards and how drinking and not knowing that you’re pregnant can cause the baby to get alcohol in their system,” Hillman said.

According to Principal Joan Benz, she hopes that these change agents will take this information with them to college and start a chapter raising awareness about these issues.

Additionally, for the students tired of being lectured about alcohol use, BSTS provides information for other teen-related issues that are often forgotten including the dangers of posting on social media when intoxicated, how to get assistance in college if a friend has blacked out, and the importance of taking a self-defense class before leaving for college.

On the contrary, senior Morgen Lewis thought the assembly was ineffective and did not have the same impact as the program “Every 15 Minutes,” held October 2012.

According to Lewis, she thought the presentation did not connect with students and the message was too broad.

Rich also discusses these topics in her blog which she hopes to expand outside the CHS community. The blog is run by BSTS’ information specialist Daniela Mielke, who first began working with Rich after serving as an au pair for four children who suffered from Fetal Alcohol Syndrome Disorder (FASD).

“They seemed to have a very short attention span and sometimes a hard time following and understanding the teacher’s instructions,” Mielke said. “I knew I wanted to intern and to gain more experience and knowledge on psychological topics, so I met with Dr. Rich and she told me about her idea to create a blog site for young women and men to inform them about a condition called FASD.”

In addition to blog posts, Rich hopes to expand the site to include other forms of multimedia.

“For now we are hoping that our blog takes off and that we can use our work at Churchill to inform other communities about consequences of alcohol use during reproductive years,” Rich said. “The next step is to begin producing episodes of ‘Teen Connections,’ which is the talk show format discussion forums we will upload weekly.”

With senior year coming to an end, BSTS serves to answer any questions students may have when transitioning from high school to college.

“For many seniors this may be the first time they go away and have complete independence,” Benz said. “There are going to be decisions that they make without consulting their parents, so the presentation is there to share the consequences.”