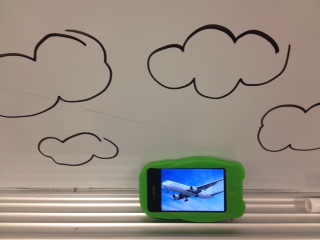 Ain’t no river wider enough, ain’t no valley low enough to break the sacred bond between an individual and his or her cell phone.

Leading in-flight wireless company GoGo, Inc. has launched a service called GoGo Text &Talk, which allows airplane passengers to send and receive text messages and phone calls from over 10,000 feet in the air.

“It would be awesome to be able to contact people on either side of the flight, so you could let them know when you’ll land and where they should meet you,” junior Jackie Spang said.

Currently, cell phones must be turned off or set on airplane mode when in flight in order to prevent interference with the communications and guidance systems on the plane.  However, this is not an issue with GoGo, because the service is installed directly onto the airplane so that it can be accessed through the plane’s WiFi while the phone is still on airplane mode.

According to the Federal Communications Commission (FCC) website, advancements in technology such as GoGo Text &Talk have lead them to issue the Dec. 12 Noticed of Proposed Rulemaking, proposing to charge some of the outdated policies prohibiting the use of cell phones on flights.

“The purpose of the Notice of Proposal is to gather comments on the issue from the interested companies like GoGo as well as the airline industry, the Federal Aviation Administration (FAA) and the general populace,” said Howard Griboff, deputy chief of the International Bureau Policy Division. “The FCC’s decision is informed by the record generated by the Proposed Rulemaking and released in the Report and Order which follows it by about a year.”

Although GoGo may not be available to the public for another year or so, students are excited about the prospect of being able to occupy themselves during long flights.

“I move every two years and go on vacation because of my dad’s frequent flyer miles,” sophomore Ignacio Massot said. “I get pretty bored on flights, so being able to call and text friends would be great.”

While some are ready to embrace the new app, many people have concerns about safety and possible disputes between passengers.

According to a Huffington Post article, 49 percent of Americans would not approve of cell phone use on planes, while 31 percent would. The remaining percentage did not have a preference.

“I would not use GoGo Text &Talk,” senior Ami Oza said. “People don’t always need their phones, and there’s a reason they should be off.”

The Association of Flight Attendants (AFA) and other flight attendant unions would agree.

According to the AFA, giving passengers the option to make phone calls would be unsafe and make flight attendants’ lives more difficult. It would potentially create “loud, divisive, and possibly disruptive” situations and distract passengers from following “lifesaving instructions from the crew” in the event of an emergency.

Ultimately, it will be the individual airlines’ decision whether to allow the implementation of GoGo on their planes.