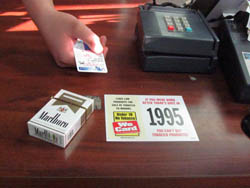 You can smell it on their breath. It lingers in their cars. It sticks to their clothes and cannot be washed out. The smell of cigarettes follows smokers everywhere, even through the Bulldog Lobby and into the halls of CHS.

Smoking has long been a problem among teens nationwide.

According to DoSomething.org, a website dedicated to spreading information about the dangers of smoking, every day, over 3,800 teens under the age of 18 smoke their first cigarette. Though cigarettes are illegal for those under the age of 18, many students still find ways to smoke.

CHS students have no trouble getting cigarettes. Junior Rebecca* gets older friends and even strangers to buy cigarettes for her.

“I either get a friend over 18 to buy them for me or I ask random people that are older,” Rebecca said. “I tell them, ‘Hey can you run in and get me cigs? Here’s money.’ They usually say yes.”

According to Crystal, store workers “only look at the date” when checking identification, ignoring important details such as the person pictured in the ID.

Though the stigma against smoking in the United States has grown in recent years, many students do not see any reaction from others, including law enforcement, when they smoke in public.

According to Rebecca, she has “never been questioned by anyone,” including police officers, about smoking.

The Montgomery County Police Department does have policies  relating to underage tobacco use. Unfortunately, it may not be enough to stop teen smokers.

According a Montgomery County police officer, who asked not to be named in this article, there is very little that one can do to confirm a suspect is under the age of 18. If a student is smoking in public, an officer is allowed to ask for identification, and if a student does not have one, officers are allowed to call the student’s parents or legal guardian.

Different teenagers start smoking for different reasons. Some feel pressured to smoke by friends, others have family members who smoke, and many are simply being curious about trying it.

Junior Hugh* has been smoking for over a year, and both of his older siblings smoke.

“My sister says she’s trying to quit, but she really isn’t, and my brother also smokes,” Hugh said. “My parents normally think that it’s one of them when they smell smoke.”

Despite many of his family members smoking, Hugh believes that it was curiosity that led him to smoking instead of influence from his siblings.

“I smoke because I want too, not because someone else did,” Hugh said. “My siblings smoking had something to do with it, but mostly just by making the cigarettes available.”

Despite having asthma, Hugh still smokes in order to relieve the stress he feels in his daily life.

“If I’m really angry about something I will have a cigarette and it will calm my nerves,” Hugh said. “It’s only one method, and I don’t smoke that often, but it’s an extremely good way of calming my nerves.”

For many years, smoking cigarettes has been linked to life-threatening diseases including cancers of the lung, mouth and tongue, as well as many heart diseases.

Despite tobacco use being the most widespread preventable cause of death, smoking causes about 1 in 5 deaths annually in the United States.

“I understand that it’s bad for you, but I’m not a chain smoker,” Rebecca said. “There are risks to everything, and I don’t smoke enough for severe side effects to happen to me.”

Others believe that smoking has already changed them. Senior Lauren*, who has been smoking regularly for about eight months, is becoming afraid of what cigarettes have done to her.

“The health effects of cigarettes scare me because I can tell that it’s affected me by my breathing and now coughing,” Lauren said.

Students said that their parents largely seemed to either be ignorant or indifferent to their smoking cigarettes.

“My mother knows I smoke,” Lauren said. “She doesn’t like it, but she doesn’t do anything really to stop it.”

In some families, the teen’s smoking is known by one parent and hid from the other. April’s mother knows about her smoking, but her dad has not yet found out.

“My mom smokes, she knows I smoke, and I do it in front of her,” April said. “She’s said she doesn’t like it, but she knows she can’t stop me. My dad will never know.”

Local schools have begun taking steps to help students stop smoking. CHS is taking part in one such program, called the Smoking Cessation Program. In the program, students in small groups of about 10 are taken from one class period every few weeks to discuss the issues related to smoking in a group setting. The program is run by the Caron Foundation, an American non-profit organization dedicated to helping drug and cigarette addicts through the process of rehabilitation.

According to Stapleton, while some students do not completely stop smoking after taking part in the Smoking Cessation Program, many “lessen the amount they smoke” every day. The program has seen “improvement” in those who participate by “allowing students to change” their behavior.

The issue of cigarette use seems to be divided in the United States today. Though some are ambivalent about the dangers of underage smoking, others are working to stop this  monumental problem.

Smoking is an issue that deserves attention in today’s society. Whether views about it will change in the future, or will remain as they are today, is yet to be determined. One thing is for sure: the smell of cigarettes will follow teenage smokers far into their future.

*Identities have been changed at the request of those interviewed.