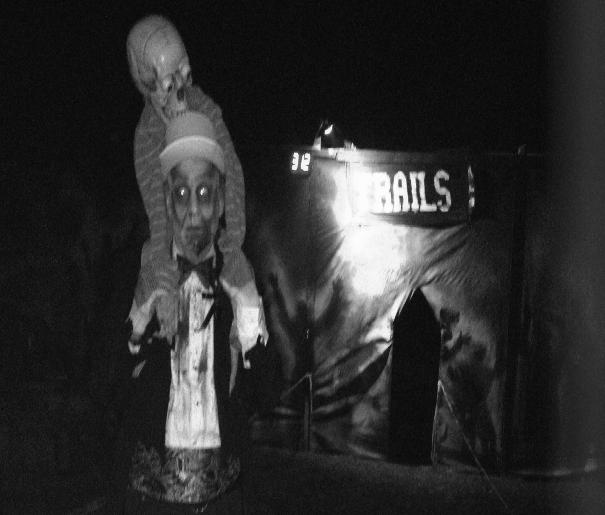 An eerie overpass, an unsettling circus scene and ghostly figures hauling around chainsaws: is this the set of a horror movie? Nope, just one of the 20-minute murky, wooded trails at Markoff’s Haunted Forest.

Even the drive up to Dickerson, MD makes for a pitted stomach. Seemingly neglected farmhouses edge the narrow roads, and the streets seem unpleasantly empty, although thousands of visitors may come through in a night.

In the Front Circle, while waiting to be called into the woods, visitors can participate in daunting events fixed around this year’s theme: “Zombie Prom.” A “zombie zip line” hurls riders across the fields of Calleva Farms. Those daring enough to try the “death jump” can climb the 45-foot-tall telephone pole and spring for a plush zombie dangling at the top, harnesses catching them as they fall. Other events include the Haunted Hayride, Doomsday Prom Bus and Zombie Head Toss.

“I did many of the Front Circle’activities including the hayride, which was my favorite,” sophomore Jessie Gloger said. “I liked it because you could get out of the tractor, which was scary, yet so much fun.”

Before creating the Haunted Forest, brothers Nick, Alex, and Matt Markoff would ride around in a school bus they had converted into their own motor home, frightening people all over Maryland.

“We drove around different communities,” co-owner Nick Markoff said. “People would line up and we would scare them, but we wanted to take it to the next level.”

That same year, in 1992, they decided to start their own camp, Calleva Outdoor Adventures, which aims to provide exciting outdoor opportunities. However, they needed to find a way to raise more money.

“It has always been that the Forest is a fundraiser for Calleva, so we can get the best equipment and staff,” Markoff said. “But we had no idea it would grow to be the size it did. “

According to Markoff, the entire process takes about a year to complete.

“In March there’s a convention for haunts, and we start thinking about what we want to do or change,” Markoff said. “We draw up plans in the spring, then get busy for Calleva. In the fall, the three of us will break away from our camp duties and start getting ready. It takes about two months to get everything set up.”

The junkyard setup, located toward the end of the trail, contains the brothers’ original bus.

“Everyone goes underneath the bus we lived in. It holds a special place in our hearts.”

Costume and makeup director Andrea Reilly has been involved with Markoff’s for 10 years.

“I costume a cast of 70-ish people in the woods and around 70 people working out in front,” Reilly said. “I have 140 costumes to make and about that many people to put on makeup and masks, depending on what the case may be.”

Bring a friend or two along to experience a new adventure together.

“It’s fun, spooky, and it’s more like just hanging out and letting your guard down in front of your friends,” Markoff said. You usually walk out holding hands, like you survived and shared a moment together.”