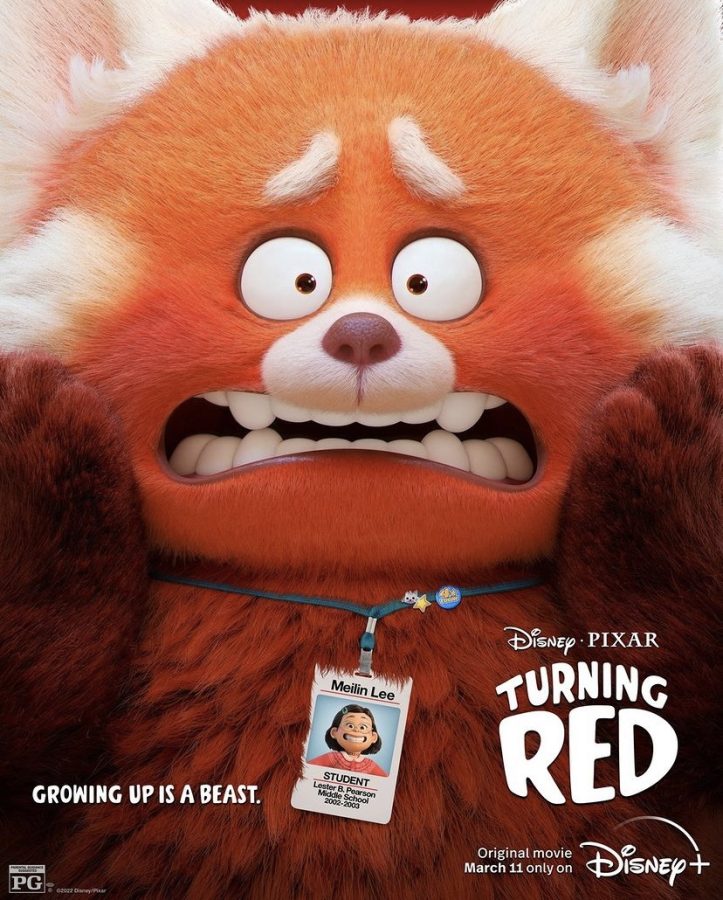 Unrelatable. Exhausting. Limiting. These words were used by a white male critic to describe Pixar’s latest feature film “Turning Red” but could not be farther from the truth. Universal, nostalgic and heartwarming are much better and more accurate descriptors.

Released on Disney+ on March 11, “Turning Red” follows the story of Meilin “Mei” Lee (Rosalie Chiang), a 13-year-old girl living in Toronto in 2002. Mei is a high-achieving middle school student who lives with her mother Ming (Sandra Oh) and her father Jin (Orion Lee) near the temple her family runs. When she is not studying for her upcoming French test or helping her mom clean the temple, she loves geeking out over her favorite boy-band 4*Town with her three loyal best friends: the “Twilight” loving Priya (Maitreyi Ramakrishnan), the loyal skater Miriam (Ava Morse) and the energetic hype man Abby (Hyein Park).

One day when Mei wakes up, she discovers that she has transformed into a giant red panda. She quickly realizes that when she experiences large emotions such as excitement, embarrassment or fear, the transformation occurs but can be reversed when in the calming presence of her close friends. Mei learns the reasoning behind her new transformation is due to a curse that has impacted all the women in her family that can only be undone with a ritual on a specific date. Unfortunately for Mei, this day also happens to be when 4*Town comes to Toronto.

When the movie was first announced, many people were understandably upset with Disney for releasing another movie centering a person of color who turns into an animal. However after watching “Turning Red,” it is clear that the red panda is significant to Mei’s family and culture and serves as a metaphor for female puberty and growing up.

Mei struggles to find a balance between living up to her mother’s expectation of perfection and wanting to have fun with her friends, all while trying to keep her emotions in check. Following a pattern in recent Disney movies, there is no one true villain in the story. Instead, the movie shows how generational trauma impacts immigrant families.

Directed by Domee Shi, “Turning Red” is the first Pixar film to be directed solely by a woman. In the short documentary released about the movie titled “Embrace the Panda: Making Turning Red,” viewers get behind the scenes footage of the process of turning the idea into reality. The documentary introduces the all-female team behind the movie and what it was like for them to create the movie mostly at home due to the pandemic.

Original songs such as “Nobody Like U” and “U Know What’s Up” were written by sibling power-duo and recent Oscar winners Billie Eilish and Finneas and perfectly reflect the fun boy band sound of the early 2000s that both older and younger audiences can enjoy.

“Turning Red” received backlash for briefly referencing periods and middle school girls discovering attraction for the first time. Young girls are raised to think these things are shameful and should be kept to themselves, so as to not make others uncomfortable. “Turning Red” breaks the stigma of discussing such topics and is a story that a lot of women wished they had had when they were young. Yes, there are some moments that are cringeworthy but so is puberty.

Another aspect that sets “Turning Red” apart from other Pixar movies is the visual style and humor. There is a clear influence of manga and anime in a lot of the characters’ facial expressions and the art style that Shi utilized in her fanart as a young girl, as seen in the documentary, is reflected in a cringeworthy but relatable scene of Mei drawing. Through creative animation, the movie is a beautiful love letter to the early 2000s with boy bands, Tamagotchi and flip phones.

“Turning Red” lovingly depicts how quirky and weird girls can be while also sharing the complexity of mother-daughter relationships. You do not have to be a Chinese-Canadian girl to enjoy “Turning Red” just like you do not have to be a singing mermaid to enjoy “The Little Mermaid” or a cooking rat to enjoy “Ratatouille.” Ignoring the outrage from people who have not actually watched the movie might result in viewers finding a new favorite Pixar movie, or at least some catchy songs to play on repeat.