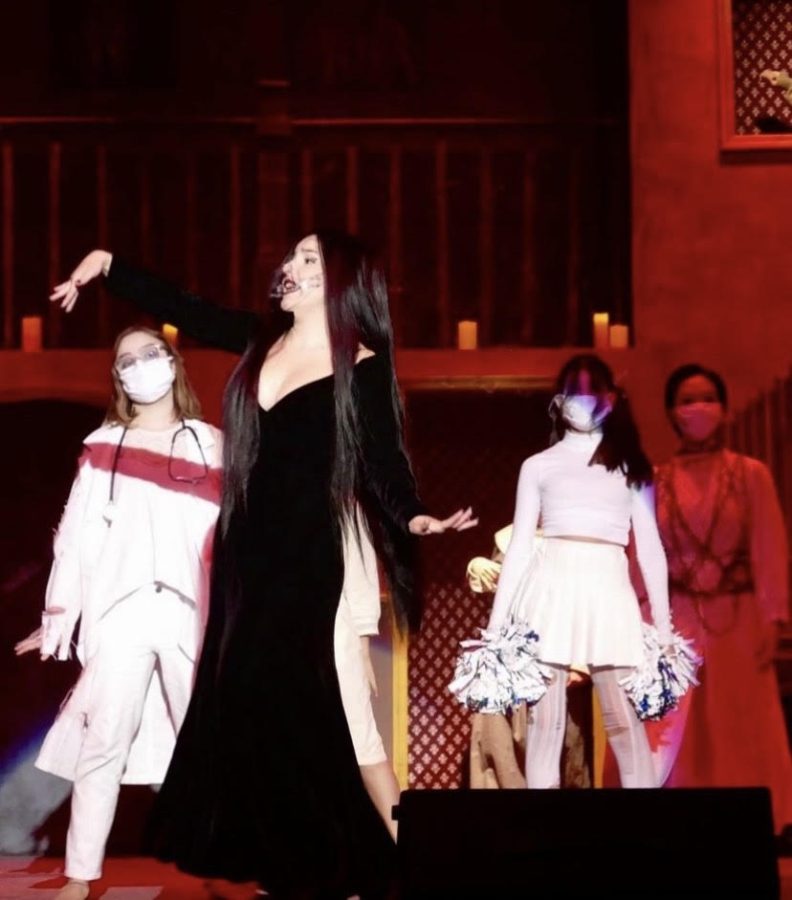 With the spotlight on her, Eleanor Raab sings one of her solos in "The Addams Family." Raab plays Morticia Adams, one of the leads in WCHS's fall musical.

Sauntering across the stage, Eleanor Raab commands the stage in her performance of Morticia Addams. With her illusive smile and a twirl of her long black hair, it is no surprise she easily captivates her audience.

WCHS senior Eleanor Raab first gained an interest in theater after auditioning for Herbert Hoover Middle School’s production of “Into the Woods” as a sixth-grader. Ever since, she has participated in many plays, Blast performances (a singing and dancing show unique to WCHS), and musicals.

“I had always loved singing, but [‘Into the Woods’] was my first real venture into theater,” Raab said. “I was eleven when I started [theater], which is crazy, considering the impact that theater has had and continues to have on my life, six years later.”

In early November, the WCHS theater department put on “The Addams Family” musical, a story that surrounds the ghoulish and obscure Addams Family and their ancestors. Raab was featured as one of the female leads, Morticia Addams, the mother of the family.

“My favorite part about Morticia is the way that she effortlessly commands attention, in her subtle, unique manner,” Raab said.

Despite Raab’s impressive and extensive background in theater, because of the peculiar nature of both the story and the characters in “The Addams Family,” it was more difficult for her to embrace her role and get into character.

“I would consider Morticia a hard role, as she is so different from both myself and roles I have played in the past, but I also believe that is what made her so fun to play,” Raab said. “It is also sometimes difficult to portray a well-known character, as you feel a certain pressure to adhere to what is canonically and iconically Morticia, but also to put your own spin on the role.”

Raab has participated in shows ranging from “Cinderella” to “Clue,” but one of her favorite roles was in WCHS’s production of “Legally Blonde” the musical in the fall of 2019. Raab was cast as Pilar, one of Elle Woods’ best friends and sorority sisters.

“I loved the energy that I brought to the stage as Pilar and having our tight-knit group of sorority sisters in that show made the production so much fun,” Raab said.

For many people, theater is a way to take a break and escape from the stresses of school and life as a teenager. For others, it is a way for them to express themselves in ways that they are not able to do off stage. However, for almost everyone, it is the relationships that they form and the memories that they gain that make participating in theater so memorable and special.

“My favorite part about theater and being on stage would be the ways in which it allows you to connect with people; I have made some of my greatest friends in theatre,” Raab said. “Not only, though, do you connect with the cast, but you can also connect with the audience; the feeling of knowing that through your performance, you made someone feel so strongly that they smiled, laughed, or even cried, is extremely fulfilling.”

The theater community is seen as a second “family” by its participants and is welcoming to everyone who has an interest and is willing to learn and participate. Raab, who has a tight bond with many of her fellow cast members, thinks that anyone with an interest should look to audition or get involved in theater.

“The theater community is so welcoming, and so accepting, so if you are considering joining theatre, even if you have no experience, just go for it!” Raab said.

After high school, Raab intends to continue pursuing theater and performing in one way or another. Raab’s experience on stage has helped her grow as a person, and that is something that she will always be thankful for.

“Theater has allowed me to become the person that I am today, through growing my confidence and making me more comfortable with who I am,” Raab said. “I can’t imagine my life without performing, and I look forward to pursuing it following high school.”