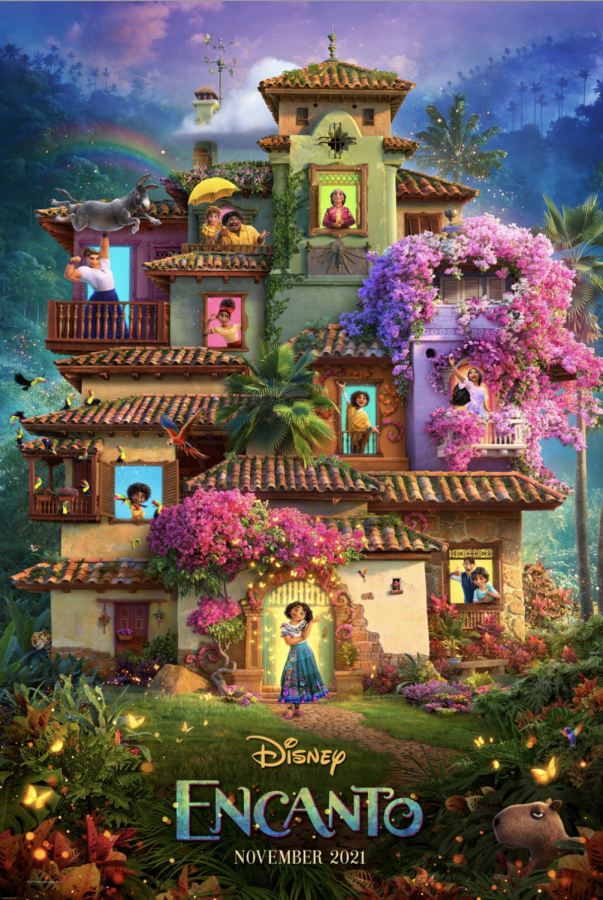 The house of the Madrigals is just as magical as they are, and every part of the house can move at the convenience of the family.

As Thanksgiving passes and the winter holidays begin, families across the country will gather together to celebrate and reunite. Within every family there are unique social dynamics like special bonds or heads that clash with one another. There are also specific traditions & values that are held to the highest standard.

Disney’s “Encanto,” which came out in theatres in the United States on Nov. 24, does a great job acknowledging this heavier and timely topic without compromising the classic magic and flair that keeps viewers coming back to see their movies.

“Encanto” revolves around the Madrigals, a family where each person is blessed with a magical power such as the ability to talk to animals or control the weather. The Madrigals use their powers to help the community around them, which started as a refugee community due to violence and war in the town where they once lived. However, the movie specifically focuses on Mirabel (Stephanie Beatriz), a young adult in the Madrigal family who did not receive a magical power at her gift ceremony, as she struggles to fit in with her family and prove she belongs.

Although Disney movies such as “Moana” and “The Lion King” have often focused on conflicts between family members, each of these movies has also had an external conflict that forces the family to unite in order to overcome the obstacle. In contrast, the main conflict of “Encanto” lies solely internally as the family’s magic starts to die out because of the increased hostility towards each other.

The movie does a great job representing the culture of Latin America and avoids overusing stereotypes, a problem that has made Disney movies controversial in the past. Everything from the music, which was written by “Hamilton” creator Lin-Manuel Miranda, to the consistent use of Spanish dialogue captivates the Latin American culture that the movie strives to follow since it takes place in the mountains of Colombia.

The setting of the Colombian mountains was a brilliant choice for this movie, as it allowed for directors Jared Bush and Byron Howard to explore the beautiful landscape and make the town surrounding the Casita, the house of the Madrigals, look like whatever they wanted. This led to the town appearing to be lost in time, filled with a delicate contrast of ordinary people and extraordinary magic.

To put it bluntly, the cast is not as star-studded in comparison to other Disney movies of recent memory that have featured the likes of Dwayne Johnson, Maya Rudolph and Danny DeVito. However, there is cause for this. Since the film takes place in Latin America, Disney wanted to spotlight hispanic actors and actresses. But don’t get it twisted. Actors such as Stephanie Beatriz of “Brooklyn Nine-Nine,” María Cecilia Botero and John Leguizamo all have great performances that enhance the spirit of the movie and allow viewers to really connect with the characters.

The animation of the movie is superb, and it appears as if Disney is really maximizing their potential with new animation technology. The scenes are very vibrant in both color and action, and the ability to make Casita and all its individual parts move the way it does is beyond impressive.

Although the movie provides a great time, there are always things that could have been improved. For example, the story spends a lot of time focusing on just a few members of the family, those being Mirabel, her sister Luisa (Jessica Darrow), uncle Bruno (John Leguizamo) and grandmother, Alma (María Cecilia Botero). The Madrigal family is very large, so it would have been cool to see more of them as well as their impact on the community.

Alongside that, it would have been really interesting to see Mirabel have a one-on-one talk about her lack of magic with her father (Wilmer Valderrama) or uncle Félix (Mauro Castillo), who both have no magic because they married into the family. It could have provided a heartfelt moment that bonded the family during a time of peak conflict, and would have given Mirabel a second, less negative perspective on her lack of abilities.

All in all, “Encanto” is another one of Disney’s must-watch masterpieces that cleverly combines great animation, stellar acting performances and a unique story all while incorporating diversity into one of Hollywood’s biggest corporations.