“Sour” is a sweet success for Olivia Rodrigo 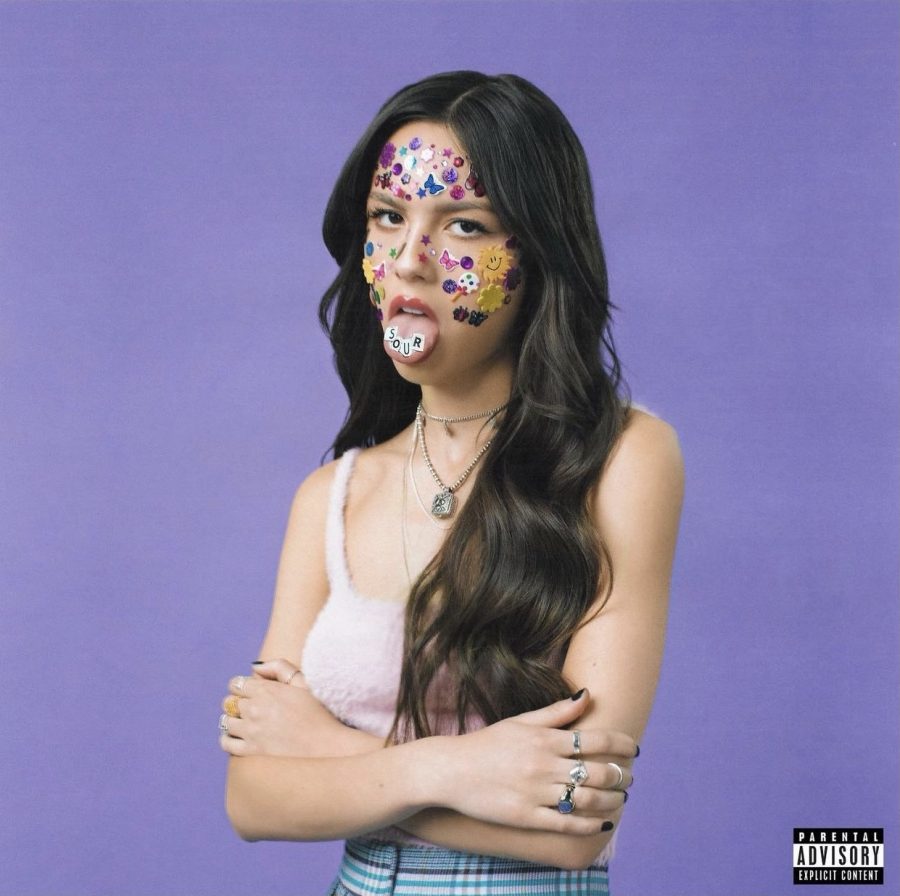 Olivia Rodrigo announced her first album "Sour" and its track list on April 13. The album features singles such as "drivers license" and was released on May 21.

Usually when an artist is starting out, their debut album is solid but there is obvious room for growth and betterment in production and songwriting. But in the case of 18-year-old Olivia Rodrigo, whose debut album “Sour” was released on May 21, a high bar was set directly after the first single was released.

“Sour” explores the raw and relatable emotions of a bad breakup in the digital age. There is no emotion left unsung on the 11 track album. Frustration? Check. Heartbreak? Check. Jealousy? Check. Each song tells its own story with captivating lyrics that encapsulate teenage heartbreak, angst and the fierce emotions of a breakup.

The album starts with a more punk-rock-sounding song called “brutal” about the struggles of being a teenager in this day and age. At the beginning of “brutal,” Rodrigo can be heard saying “I want it to be like messy” followed by a sudden grunge guitar sound taking over. The listener is taken to the song filled with the rage of growing up with constant anxieties and social pressures. It is a very different sound than her first two released singles “drivers license” and “deja vu” but is a song many of her listeners can relate to in one way or another as many of her listeners are also “so sick of seventeen.”

The first emotion of a breakup that is explored in “Sour” is pure sadness and sorrow. Tracks two, three, and four all express the pure heartache felt during a breakup. Track two, “traitor” is arguably one of her most emotional and impressive songs on “Sour.” It focuses on the betrayal felt when her ex-boyfriend moves on shortly after their breakup and how painful it is to watch them fall in love with someone else so soon.

“1 step forward, 3 steps back” reflects on mixed singles from the ex and the toxicity of the relationship. Rodrigo wonders if the boy will “walk [her] to the door or send [her] home crying.” The fourth track of “Sour” interpolated the melody of Taylor Swift’s “New Years Day” from her 2017 “reputation” album who happens to be a huge inspiration for Rodrigo.

The influence of artists like Taylor Swift is very apparent but only makes the album stronger. It is like Rodrigo combined the lyrical masterpieces of Swift with the angst and rock vibe of Paramore to create a phenomenal and relatable album.

Tracks five, “deja vu” and six, “good 4 u” represent the period where you realize you don’t need the other person, and the sadness that consumes you turns into rage and power. “deja vu,” the second and more upbeat single off of “Sour” reflects on how her ex’s new relationship is filled with all the same things they used to do. The third single, “good 4 u” takes a more resentful approach to the ex moving on before she is able to, but in the best way possible. It is a nice contrast to the sadder songs on the album and explores emotions women are normally shamed for experiencing after breakups.

The next stage of a breakup expressed is the reflective period. On track seven “enough for you,” Rodrigo takes listeners back to a more emotional place where she asks herself how even after all she did, how come she was not enough. Track eight, “happier” is wishing her ex well with their new partner. “happier” is a direct response to the ex by saying “I hope you’re happy, but not like how you were with me.” It is the acceptance of their ex’s new relationship but also the common feeling of still wanting to be their strongest and happiest love.

One of the stand out songs on the album has to be track nine, “jealousy, jealousy” which explores the unattainable and unrealistic standards that social media sets for teenagers, a common issue for teenagers and Rodrigo today, making this song deeply fitting for the album and her primary fanbase. One of the lyrics most prevalent in society today is “comparison is killin’ me slowly. I think I think too much ‘bout kids who don’t know me.” The upsetness of the music and the lyrics about comparing yourself to “perfect” lives we see on social media is what makes “jealousy, jealousy” a song that anyone could scream alone in their car.

“favorite crime,” the tenth track on the album, reflects on a past relationship. It is vulnerable as she metaphorically compares the relationship and its issues to crimes. The last track “hope ur ok” reminisces of past friendships with people who faced neglect and trauma from their families in their earlier years. It is written and sung like a letter where she tells her old friends how proud she is and how much she loves them. It is a sentimental end to the 34 minute album and a reminder to everyone going through something similar that they are not alone.

It is incredibly impressive when someone can make a no-skip album, especially as a debut, and Olivia Rodrigo is no exception to this. As well as being incredibly popular with the fans, Olivia Rodrigo is breaking major records in her career. She was the most-streamed artist the day of and after the “Sour” release and she is the first artist to start her career with her first three released singles in the top 10 of the Hot 100 Chart. If this is any telling of how successful Rodrigo will get, fans cannot wait for her next single and album to take over the music industry even more than “Sour” has.