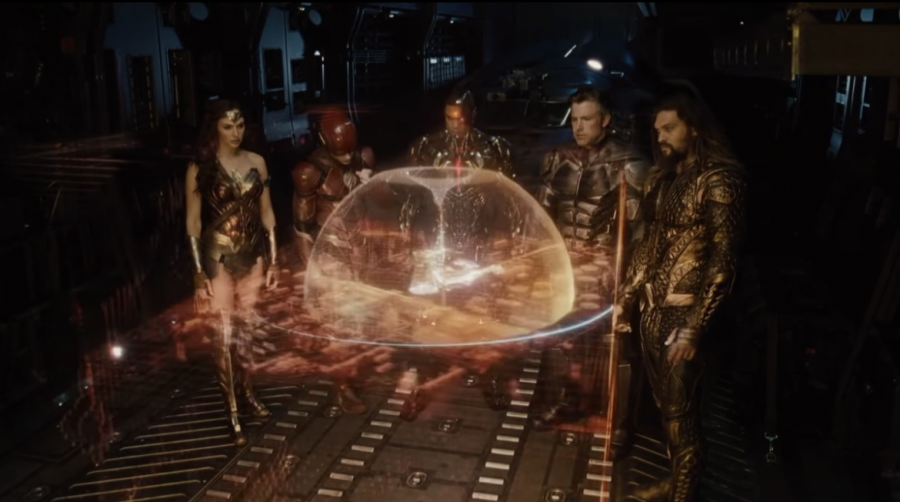 Visual effects like the hologram showed above were just one of the things that Zack Snyder nailed in his version. Additionally, great camera angle choice makes this scene one of the best in the movie.

Four years ago, DC Comics and Warner Bros. Pictures paired up for their fifth movie in the DC Extended Universe (DCEU). Featuring a loaded cast and a plotline strong enough to rival any superhero movie in the past, “Justice League” was slated to be one of the best superhero movies of the decade.

But, a mid-production director change due to the death of original director Zack Snyder’s daughter, and tough competition for viewers with Marvel movies like “Spider Man: Homecoming” and “Thor: Ragnarok” made “Justice League” a flop at the box office and lost Warner Bros. around $60 million.

Fast forward three years. After being disappointed with how the movie went, rumors surfaced surrounding an alternate cut of the movie that was longer and more eventful which Snyder had in mind before stepping down. Soon, DC comic fans around the country clamored for the “Snyder Cut” to be released as part of the DCEU. Fortunately for them, their wishes came true when Warner Bros. decided in February 2020 to move forward with the project, and release the four hour long movie on March 18, 2021 on HBO Max.

There are both pros and cons to a movie that is four hours long. For reference, both of the most recent “Avengers” movies (“Infinity War” and “Endgame”) combined were only an hour and a half more. Having a movie this long allows for Snyder to go more in-depth with the plot and deliver many more scenes that connect the dots of the storyline. But, a movie of this length has to exceed expectations and have constant action and plot twists in order to keep viewers awake and interested.

The cast for the movie is still the same, and features a lineup full of notable actors such as Ben Affleck, Gal Gadot, Jason Momoa, Ezra Miller, Henry Cavill and Amy Adams. Additionally, the longer film allows for characters played by Willem Dafoe and Ray Porter to have a larger role in the movie.

However, this star-studded cast doesn’t fully save this movie from a lack of characterization. With the exception of one or two characters, the movie heavily relies on flashbacks of each character to fill the viewer in on everything they need to know. As one might predict, trying to shove the entirety of a character’s life in a two minute flashback does not go well. This is especially clear when the movie introduces the villains, Steppenwolf and Darkseid. The two are barely given any characterization throughout the whole movie, which leaves their motives lacking meaning and their personalities bland. But, the movie does improve on the 2017 cut, in which many of the flashback scenes aren’t even included. So, there is a silver lining.

Unfortunately, another drawback of the Snyder cut as well as the original “Justice League” movie is that it can be confusing for anyone new to the franchise. With many of the main characters already being featured in one or two previous DCEU movies, the movie doesn’t spend a lot of time reintroducing these characters. This could leave new DCEU fans in the dust, as previous events and characters are mentioned frequently with no context to aid these new viewers. Additionally, those who haven’t seen the 2017 movie might also get lost and not recognize the strides made by Zack Snyder in this movie.

On a more positive note, the visual effects, editing and soundtrack, which is what almost all of the Snyder cut’s $70 million budget was spent on, was perfect for the movie. Although settings like an abandoned nuclear plant, the underwater world of Atlantis and a fiery ancient battlefield can be hard to make look realistic, the Snyder cut does this very well through both real and green screen sets. Additionally, the sound track gives each main character their own theme music. While this can be repetitive at times, it also excites the viewer and lets them know something big is about to happen. The mix of rock & roll and classical music, along with the mix of both positive and negative emotions fit seamlessly into the movie and match the tone quite well.

Similarly, the action scenes of the movie are filled to the brim with excitement, fierce battles and a great one-liner every once in a while. Although plot armor does protect the protagonists and makes the ending quite predictable, seeing Superman, Batman, Wonderwoman, Aquaman and more fight alongside each other to stop the forces of evil is epic for all true superhero movie fans.

Overall, the Snyder cut does justice to the DCEU and makes up for a lot of the faults that the original movie had. Better characterization, a more in-depth plot and stunning visuals make the movie really interesting for all fans of the DCEU. But, the movie just isn’t worth four hours of anyone’s time and can confuse anyone who hasn’t seen the previous films of the DCEU or the original 2017 version of the movie.