Missed the show? These are the best and worst moments of the 93rd Oscars 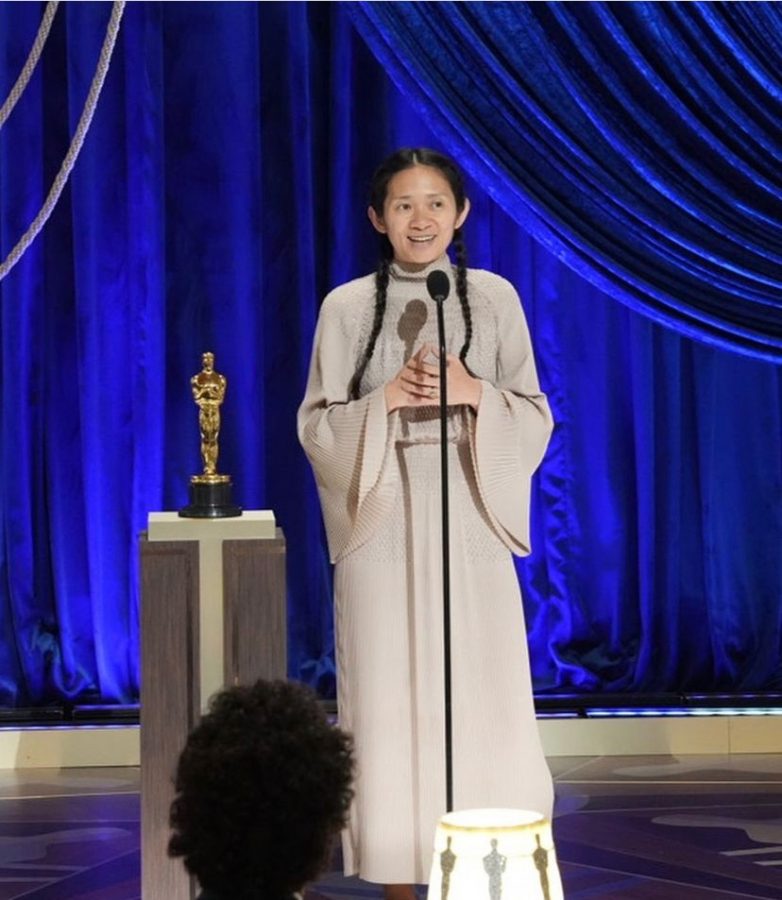 Chloé Zhao, Director of "Nomadland," made Oscar history as the first woman of color to be nominated and to win an Academy Award for best director. Zhao is also only the second female director to win an Oscar since Kathryn Bigelow for "The Hurt Locker" in 2010.

By Ela Jalil and Olivia Yasharoff

The 93rd Oscars was a night of bold fashion choices and historical firsts, with changes to the original way of doing things that left the audience confused and shocked. For those who missed out on watching the show, these are the best and worst moments.

This year’s Oscars was the stars last chance to show off their style before the end of awards season. With a dress code mandating formal wear, gowns and suits were commonplace on the carpet. Some took risks with color that yielded a high payoff, while others completely missed the mark on textiles. These are the best moments seen on the carpet.

The actress that completely stole the show on Sunday was Regina King, wearing a custom pale blue Louis Vuitton dress. According to Vogue, the outfit took 140 hours to make and utilized 62,000 sequins to create the final product. Along with this, 3,900 crystals were used to run lines through the floor length dress and adorn the sleeves, defining the actress’s silhouette and providing much-needed bling. The sleeves were the pivotal part of the outfit, reminiscent of angel or butterfly wings. King’s outfit was perfect to start the show off with as she gave a powerful opening speech.

Bold sleeves were found on another carpet favorite, with Angela Bassett stunning in an Alberta Ferreti gown. The bright red ensemble featured a thigh high slit through her left leg, and dramatic puff sleeves that complimented the off the shoulder look. Bassett paired this with a Judith Leiber purse, known for their bejeweled fun shapes, and a dark blue eyeshadow. Bassett was able to adhere to the classiness of the event, while also adding some fun elements to brighten up the event.

With a custom Vivienne Westwood dress, actress Marlee Matlin proved that an all black dress is far from boring. Made of sustainable fabric, the dress was off the shoulders with long flowy sleeves that trailed her in a cape like fashion. Her entire body was covered in silver flower embellishments, that sparkled against the black, and gave a Morticia Adams vibe to the carpet.

Men’s formal wear is not known for its originality, but LaKeith Stanfield and Coleman Domingo were able to stand out amongst the other actors through their bold style and color choices. Stanfield wore a ‘70s inspired Saint Laurent jumpsuit, which was made out of sustainable materials according to GQ. The outfit featured a plunging V-neck layered over a white shirt, which referenced a 2021 women’s collection, and is another example of gender fluid styles increasing the creativity of outfits. Additionally, Domingo brightened up the carpet in a bright pink Versace suit, joined with lines of Swarovski crystals and sequins trailing from his shoulders. Domingo was unique in his color choices, and his effort paid off with his outfit being one of the most memorable of the night.

Many others stunned on the carpet, from H.E.R’s homage to Prince in her hooded lacy blue jumpsuit, to Isla Fisher’s throwback to old Hollywood in her sleek black dress. Amanda Seyfried stole the show in a red tulle dress, along with Alan Kim in his custom Tom Brown shorts suit. All in all, many stars took the opportunity to dress formally and creatively, perfectly fulfilling the guidelines and impressing audiences.

The expectations were high for this year’s Oscars, with the producers asking for outfits to be “a fusion of Inspirational and Aspirational.” Regrettably, many fell short in this assignment and showed that money can not always buy style.

When there are moments of triumph on the carpet, there are also moments of total failure. Unfortunately Reese Witherspoon fell into the latter category for this year’s Oscars. Witherspoon’s outfit featured an asymmetrical halter top, a thin black belt with a gold buckle and a two toned deep red dress. The halter straps and belt were unnecessary for the outfit, and would have looked better if the stylist took a fit and flare approach. The panel of maroon running through the side of her dress did not mesh well with the brighter shade of red that encompassed the majority of her outfit, and would have boded better if she stuck with one color. This gown exemplifies how even a designer brand like Dior can still create ugly clothing.

Witherspoon was not alone in her poor color and textile choices, usually fashionable Halle Berry also disappointed this year. To start off, Berry’s gown is from the problematic brand, Dolce and Gabbana, one that has been mired in racism and homophobic scandals over the past couple of years. Beyond that, the dress was unappealing to look at in color and fit. The large bow in the front did nothing to her advantage, and the mauve color of the dress aged her ten years. But what really threw her outfit off was her blunt bob cut that she premiered for the first time on Sunday. Instead of the chic look that she was going for, it appeared like someone took a weed wacker to her hair. Berry can and will do better in the future, and her first step should be to stop affiliating herself with Dolce and Gabbana.

Laura Dern cosplayed as a feather duster this year, wearing a long sleeved velvet black dress that transitioned into a stark white feather bottom. Dern usually keeps it simple but classy on the carpet, and tried to take a more daring approach that did not pan out well. Viewers were reminded of the infamous Bjork swan dress of the 73rd Oscars, when seeing the Oscar de la Rnta dress in its entirety. The switch from the top to the bottom happened too far down, and the contrast between the two fabrics was too drastic, and would have looked better if the designer picked only one of them.

Although there was progress in regards to men’s clothing, some actors completely missed the mark. Wearing gold to the Oscars is meant to be a good luck charm, but overall looks tacky if the right shades and materials aren’t picked. Leslie Odom Jr. fell into this trap with his full gold Brioni suit, that was somehow wrinkled and stiff at the same time. The high neckline did not do him any favors, and his shoes clashed with his outfit. Another person who attempted to use gold was Questlove, the DJ of the event. His ensemble was completed with spray-painted gold crocs that slowly chipped throughout the event. Crocs are the antithesis of classiness, and ended up making the rest of his well styled outfit look cheap.

There were many other fails of the night, from Andra Day’s flimsy gold cutout dress to Vanessa Kirby’s ill fitted gown and makeup. Although it is the end of awards season, these stars have plenty of time to impress in next year’s show.

Best: A historic night for firsts

One of the most memorable awards of the night was Best Director, which went to Chloé Zhao for her film “Nomadland,” which also received the Best Picture award. Zhao made history as the first woman of color to win Best Director and only the second woman to receive Best Director since Kathryn Bigelow for “The Hurt Locker” in 2010.

Another Oscar first was Youn Yuh-jung of “Minari” becoming the first Korean woman to win any acting award. Yuh-jung is the first Asian actress to win an Oscar since 1957, and only the second ever in Oscar history.

Finally, Makeup and Hairstyling winners of “Ma Rainey’s Black Bottom,” hair department head Mia Neal and actress Viola Davis’s personal hairstylist Jamika Wilson, became the first Black women to win this category. The historic moments of this year’s Oscars can be summed up by part of Neal’s speech in which she said, “And I also stand here as Jamika and I break this glass ceiling with so much excitement for the future. Because I can picture Black trans women standing up here, and Asian sisters, and our Latina sisters, and Indigenous women. And I know that one day it won’t be unusual or groundbreaking it will just be normal.”

In a year in which so many have lost their lives to COVID-19, police brutality and other causes, it would be expected that the annual “In Memoriam” part of the show would be touching and a way to remember those in the entertainment industry, as well as the rest of the world, who have passed away. However, this year’s “In Memoriam” segment felt rushed and almost disrespectful. The images and names flashed on the screen far too quickly to read let alone memorialize. Stevie Wonder’s “I’ll Be Loving You Always” played during the segment and the tempo felt a bit too upbeat considering the circumstances. The Oscars also received backlash for excluding certain people in the entertainment industry who have passed, including “Glee” actress Naya Rivera and “Arrested Development” actress Jessica Walters.

In between awards, viewers at home got to get a few sneak peaks at upcoming films. First came Steven Spielberg’s adaptation of “West Side Story,” which will be released Dec. 10.

Next, viewers got a taste of “Hamilton” creator Lin Manuel Miranda’s musical film “In the Heights,” which will come out July 11. Viewers also got to see a trailer for musician Questlove’s directorial debut, “Summer of Soul.” The documentary has never before seen footage of The Harlem Culture Festival of 1969, and will be released on Hulu on July 2. In 2020, the release of many films was put on hold due to COVID-19, so it was exciting to be able to get a look at these heavily anticipated movies.

Worst: Straying from tradition in a negative way

Things were done very differently at the Oscars this year. For starters, they were held at a different venue, Union Station in Los Angeles. Unlike every other year, no movie clips were played during nominee listing, making it difficult for viewers to imagine or even understand who was up for the award. In addition, all performances of nominated songs were pre-recorded and played during the pre-show, unlike a typical Oscars show.

This year, another difference that shocked viewers was the changing of the category order. The Oscars always end with the Best Picture award, but this year it was third last, making Best Actress and Best Actor the final categories of the night. Because of this never done before switch, almost all viewers at home assumed this meant that the Oscars would honor the recently passed Chadwick Boseman with an award for his role in “Ma Rainey’s Black Bottom.” However, the award went to Anthony Hopkins for “The Father,” leaving viewers at home shocked. The disappointment was not because Hopkins was undeserving, it was because many felt that the Oscars used Boseman in order to receive higher ratings and then did nothing to honor his memory. Hopkins was not at the ceremony to receive his award, and the Oscars did not allow him to speak via Zoom, making the ending of the show very abrupt.

Although “cinema’s biggest night” this year fell a bit flat, it was still nice for viewers at home to have a sense of normalcy, and be able to see beloved and well-dressed celebrities interacting with one another in-person, instead of the virtual environment other award shows have adopted.

Best International Feature Film: “Another Round”

Best Actor in a Supporting Role: Daniel Kaluuya, “Judas and the Black Messiah”

Best Animated Short Film: “If Anything Happens I Love You”

Best Original Song: “Fight For You” by H.E.R, “Judas and the Black Messiah”

Best Actor in a Leading Role: Anthony Hopkins, “The Father”