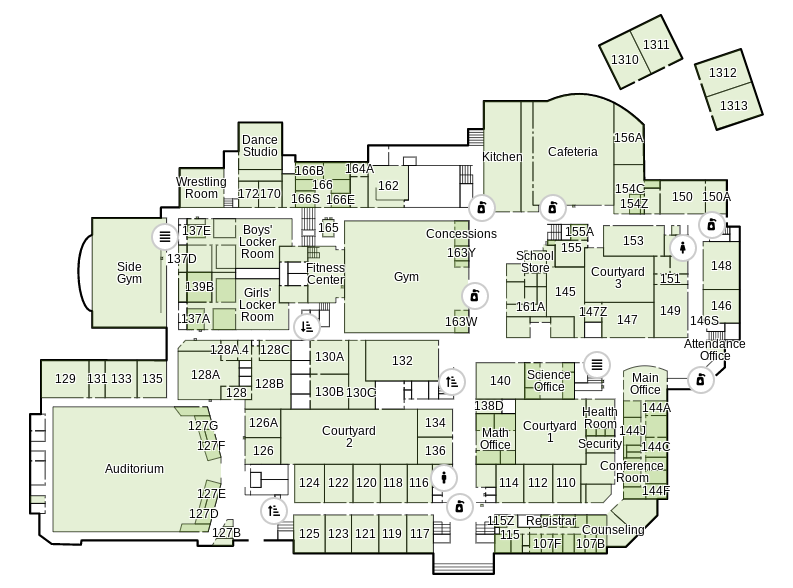 On senior Nathan Varner's interactive map of WCHS, students can check out different locations -- including classrooms, the gym, the auditorium and hand sanitizing stations.

As students return to the building for the first time in over a year, and for some, the first time ever, it is not a stretch to say some people have forgotten where they are going. While the lifeblood locations of the building — the Bulldog Lobby, the gym and the cafeteria — have not been forgotten, finding a specific classroom has been. Just ask WCHS senior Andy Chen.

“At the beginning of every semester, I used to struggle with finding where my classrooms are, and arriving late when I do find the class,” Chen said.

Luckily for Chen, there was a map to guide the way. It was far from the traditional map of the school — a printed piece of paper with just the classrooms — and it certainly helped him.

“The map has definitely changed all of that,” Chen, who was referring to his earlier struggles, said. “The interface is smooth and easy to work with, and directions are clear. I often recommend this to lost freshmen in the hallway.”

This interactive map shows students where they can fill up their water bottles, sanitize their hands and locate the nearest staircase. And it is senior Nathan Varner’s pet project.

“I started developing the map in my sophomore year,” Varner said. “My most immediate inspiration for making the map was my tendency to get lost whenever my schedule changed. I decided that the best solution to my problem was an interactive map in the style of OpenStreetMap or Google Maps, since it would do the hardest work automatically and would be helpful for everyone.”

He began to build his map in reconnaissance missions around the school during the lunch period and before school started. In the nearly three years that he has been working on it, Varner has taken his project from the basics to adding minute details — like bathrooms, water fountains and the offices for each department — using the information he learned in his recon missions.

“The programming is more technical, but I usually focus in on a single feature I want to add, then concentrate on it for a few days until I’m happy with how it works,” Varner said. “When I start programming, I break the feature into the smallest components I can, then program them. I combine those building blocks into larger and larger components until I’ve finished.”

The self-taught Varner first learned to program when he was in elementary school by reading library books on the subject. He also practiced by using coding tutorial websites and making small projects. By the time he got to WCHS, he had found his calling: computer science clubs.

“Clubs were hugely more important to the development of my programming skills than classes,” Varner said. “Since freshman year, I’ve learned a lot of higher level programming concepts by talking with other members of the STEM Club. One of these concepts is graph theory, an intersection of math and computer science that deals with connections between things — like hallways between classrooms.”

Varner is the president of the STEM club at WCHS, which works with students interested in science, technology, engineering and math. They primarily focus on robotics, computer programming and cybersecurity through projects the members create. Andy Chen, a senior and member of the club, sees Varner as the man behind the club’s success.

“The club is a place filled with extremely talented coders and mathematicians. I’ve learned a lot from the people here,” Chen said. “In particular, Nathan, who has supported me and taught me coding. The members here are always looking for opportunities to better this community and further STEM education for everybody. Their tutoring sessions are the main reason I was able to get a 5 in AP Java.”

The interactive map of WCHS may be Varner’s most high-profile project, but not his first. Varner — a strong supporter of open source coding because of the benefits it offers to beginning coders — has previously created projects on Carbon Dioxide, lengthening URL and running the internet (yes, you read that right).

“I created Not Hacker Typer as part of a demo for an elementary school STEM Night. I think it was at Beverly Farms ES. It takes any typing on the keyboard and turns it into real code used to run the internet,” Varner said. “Make a URL Longer was really just made for fun after someone in STEM Club wondered about the opposite of a URL shortener. I started by splitting the URL into characters, then came up with some filler text to put between all the characters.”

The Carbon Dioxide sites were created for the BlairHacks hackathon (linked above) and a class project. Minus the reason behind them, there were many similarities between the two projects.

“I chose these topics because it’s imperative that we’re aware of our impact on the environment and the choices we can make to lessen it,” Varner said. “For both, I had to start by finding a data source I could base my calculations on. I then designed an interface, grabbed the user’s input, ran the numbers, and output the result.”

In February, when Montgomery County Public Schools announced that students would return to school in-person, Varner reached out to WCHS Principal Brandice Heckert to learn about the school’s plan to return. Varner used that information to update his map and sent it to her.

“[Varner] met with me to review upgrades. He asked that I email it to all students,” Heckert said. “I hope the students get great use from it so they feel comfortable in the building.  I also sent it to all staff for them to use and share with students.”

STEM club members, when they found out about Varner’s map being sent out by Heckert to every student at the school, could not have been prouder for one of their members.

“This was a really big thing in the STEM club, since Nathan is one of our best programmers,” Chen said. “We were all excited about the launching of the app. He didn’t disappoint, and the map does the job perfectly.”

Coding may not come to mind as the first form of art. But the craft and its crafters are just as passionate about their work as some of the greats: Dali, Picasso and van Gogh.

“I think of programming as a very powerful tool,” Varner said. “It’s easy to find examples of malware designed to do damage and poorly designed code or good ideas gone wrong that are also harmful. On the other hand, some programs make our lives vastly easier and better. I strive to write as much of the second kind of code as I can.”