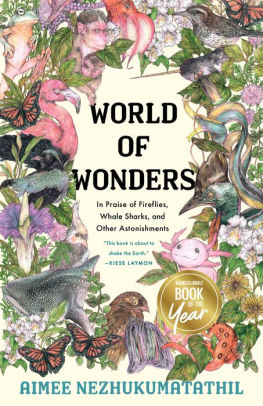 Photo courtesy of Barnes and Noble

"World of Wonders" has quickly shot into relevancy after being Barnes and Noble's "Book of the Year."

Each year, booksellers from around the country vote on a novel that is truly profound, beautiful and meaningful. The book is not the most popular, nor the most influential, it is simply the best-written book with the most powerful meaning. This year, the Barnes and Noble “Book of the Year” is “World of Wonders,” by Aimee Nezhukumatathil.

A seasoned poet, Nezhukumatathil has already won several awards in writing. Among her many accolades, she has been named a Guggenheim Fellow of Poetry, has won a Pushcart Prize and she has a fellowship with the National Endowment for the Arts. Although she does write poetry and stories in her spare time, she mainly teaches English at the University of Mississippi.

Unlike the typical novel, “World of Wonders” is a collection of essays, each one detailing a significant story from Nezhukumatathil’s life. The stories are mostly serious, covering difficult topics such as the racism she faced growing up in Kansas.

These stories make the book all the more relevant to today’s society. Many of the topics Nezhukumatathil covers in her essays are applicable to social movements and serious incidents that we see today. It is another layer of the essays that makes the book all the more powerful. The stories she tells will remind readers of some of their own experiences in life.

For younger readers, Nezhukumatathil’s stories are extremely important. They carry lessons that have withstood the test of time, each one involving traits such as patience, kindness or acceptance. After most of the essays, the reader will have walked away with a newly discovered perspective of life, complete with a lesson on morals.

In unprecedented fashion, Nezhukumatathil attempts to connect each essay to an aspect of nature. Whether flora or fauna, she weaves her personal stories into nature, cleverly illustrating the interlockings between both worlds.

This writing can sometimes feel a little forced, as some of the connections she makes are not the strongest. However, some of the things she connects click, making for a beautifully woven story involving her personal experiences and the strange parallelisms they have with nature.

Nezhukumatathil manages to capture the beauty of nature in her writing. This is no easy feat, but she does it within every essay or short description. She finds the beauty in nature that we so often miss, writing about the interesting traits and lessons one can learn from animals like the axolotl or the peacock.

Overall, Nezhukumatathil is an excellent writer and this can clearly be seen throughout her collection of essays; each word is carefully chosen and each sentence is expertly crafted. The novel is a testament to her merits, and it is well worth the “Book of the Year” award.

In a time of such uncertainty and fear, Nezhukumatathil’s book calms in a storm of chaos. Her writing is peaceful and serene, a sturdy rival to the craziness that surrounds us. This is the perfect book to read during your free time. It is not a novel to be rushed or speedread; each of her essays deserves the time and attention she clearly put into it. Reading an essay a day is more than enough of Nezhukumatathil’s writing to quench the reader’s thirst for a good book.

I strongly suggest Barnes and Noble’s 2020 “Book of the Year.” It is much more than a book. It is the amalgamation of human experience and nature, captured through the skillful writing of one Aimee Nezhukumatathil. The book can be found in bookstores or can be ordered online off of the Barnes and Noble website.