“The Karate Kid” franchise is back with Netflix’s “Cobra Kai” 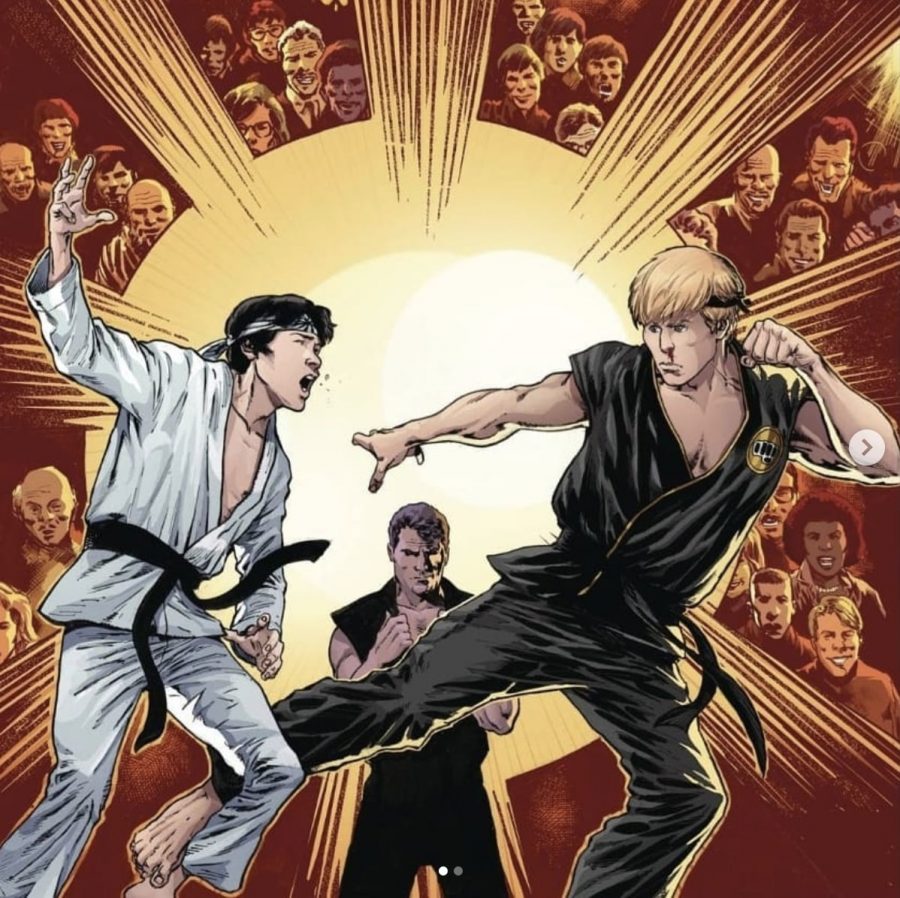 A lot of people enjoy the karate theme of the show and movie. Some of the artwork made in lieu of the show is just outstanding.

It’s been over 30 years since Daniel LaRusso and Johnny Lawrence had their epic karate match in the classic 80’s film, “The Karate Kid,” but thankfully it wasn’t the last. After a large demand from lovers of the original movie to create a show with the original characters, the cast decided to come back together to film the currently popular TV show, “Cobra Kai.”

One of the reasons that the show has gained popularity is due to the fact that not only are children watching the show, but their parents are watching it because of the nostalgia from their childhood. Adults also might like the show because they kept the same actors from the 80’s movie, so it’s fun to see how all of the characters have aged.

The show begins with a backstory of what has happened to Johnny over the past 30 years since the Karate duel. It turns out that Johnny has hit rock bottom, is an alcoholic and lives in Daniel’s shadow. Because of this, he decides to reopen the infamous Cobra Kai karate dojo.

Throughout the first season there are multiple flashbacks from the original movie which are outstanding because the scenes they choose are arguably the best scenes. Another aspect of the show that is interesting is that the viewers tend to support Johnny, who was the antagonist in “Karate Kid.”

One reason that the show is widely regarded as one of the better sequels of a movie or show is because normally the second or third versions of the movie are horrible, but “Cobra Kai” does a really great job of integrating the new and old characters.

The combination of the exceptional acting, tremendous directing and fantastic plot and script creates a very binge-worthy show with a sticky storyline and nostalgic roots.

The show’s success is evident through data and statistics. According to Wikipedia, “Cobra Kai” has been watched by 73 million Netflix member households between the three seasons. As of now the show is only available on Netflix, but the creators and producers are trying to expand their audience by putting the show on other platforms. Just imagine what type of numbers the show could have if it was on other streaming services like HBO GO or Hulu.

Another great thing about the show is that it is not dated, unlike the movie. Because “Cobra Kai” was written recently, everything is based on present times and it makes the show more appealing to children and young adults.

People all around the country are obsessed with this show because it’s something new that viewers have never really seen before. The only show that has a similar base where all of the old characters would come together would be “Fuller House,” but other than that there haven’t been too many shows that have successfully revived a past show or movie.

The uniqueness is attractive to wide audiences and that’s why it has done so well on Netflix. All in all “Cobra Kai” is a terrific sequel show to a legendary movie that’s filled with love, drugs, and humor and is an instant classic. As the director and cast have announced that a season four is in the works and is coming soon, many WCHS students can’t wait to see what’s next at the Cobra Kai Dojo.