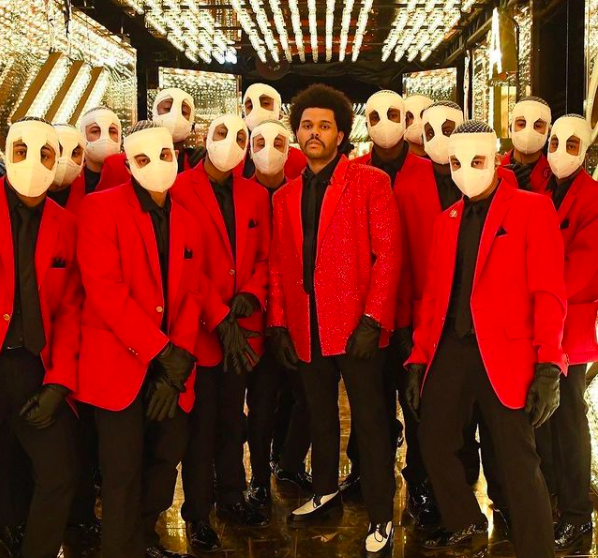 Inside one of his many Super Bowl Halftime Show backdrops, The Weeknd stands side by side a few of his extras for the performance. The extras were dressed to look like clones of The Weeknd for the February 7th performance.

“Blinding Lights.” Not only is this the name of the song that The Weeknd closed out his performance with, but they are also two words that could describe almost any Super Bowl halftime show. Except for this year’s. Apart from a few exceptions including the very start of his performance when The Weeknd was in the middle of a bright city backdrop, his production was overall pretty dark, taking place in a pitch-black Raymond James Stadium in Tampa Bay.

Many viewers either loved or disliked the 2021 Pepsi Halftime Show. It is hard to rank this year’s halftime show objectively among the gigs of the past because of the two strongly differing opinions about it. The show used various unique stages in the stands of Raymond James Stadium to get around the challenges of staging a spectacle during a pandemic and a crowd of 22,000.

“I wish his performance was more vivid and had more colors. It was a little dark and I think with more lights it could have been better,” WCHS junior Spencer Nash said. “Overall I did like it though, I didn’t think it was terrible and I’ve definitely seen better but it was still good.”

The show made do with what it had and more. The Weeknd contributed $7 million of his own money towards the construction of the halftime show. Not only did the show have various stages set up in the stands, rather than on the field like usual, but it also had over a hundred extras dressed to look like clones of The Weeknd. The extras were seen in red and black suits with white bandages around their faces, dressed to look exactly like The Weeknd himself. Many people did not understand the bandages, but it is an allusion to The Weeknd’s own personal narrative meant to reflect the absurd culture of Hollywood celebrities that manipulate themselves for validation and superficial reasons.

The costumes of these extras were extremely innovative as having that many people dance together during COVID-19 requires the use of face masks to stop the spread of the virus. The face masks worn by every one of them were almost invisible to the public eye because it was very well blended in with their bandage costumes. Not only were the costumes symbolic but they were also very clever and not appreciated enough by many nationwide.

“I thought the performance was great but also thought it was very creative how they incorporated the masks in their costumes,” Nash said.

While the performance was thought of as exceptional for some, others thought it was a bit disappointing. For many viewers, the CBS broadcast had messed up the microphone and audio of The Weeknd, so he was a bit quieter than he really should have been. In addition, The Weeknd performed solely alone which disappointed some people as rumors of Miley Cyrus joining him beforehand had spurred.

Although he was not accompanied by any other musicians, there was a very special dancer among the hundreds of them. Joshua Felder was the first disabled man to perform at the big game. The 23-year-old is intellectually disabled but has a photographic memory.

“After the long year we had I was honestly expecting a lot more from the Super Bowl halftime show. I was expecting a better performance from The Weeknd and maybe even a special guest or something as well to spice it up a little bit,” WCHS sophomore and avid halftime show hater, Justin Polhemus said. “I think he also could’ve chosen better songs, I didn’t like the songs he performed.”

The most iconic moment of the night was when The Weeknd took the camera and filmed himself while performing “Can’t Feel My Face.” The Weeknd spun around multiple times in a bright gold room surrounded by gold mirrors and clones of himself. It was the first time this type of angle had been used to film and it allowed for a more up close and personal feel.

His viral moment of taking the camera and spinning was one of the most 21st century things from the show as it resembled that of a selfie. Many memes took the nation by storm from this clip and some people still have doubts of whether or not this was choreographed. Regardless, the entire performance of “Can’t Feel My Face” was extremely energetic and chaotic which contrasts some of the other darker landscapes used that night.

“The overall execution of it wasn’t great. In my opinion it was poorly orchestrated and could have been so much better,” Polhemus said. “Most of the time I look forward to the halftime show, depending on who the artist is but this year I was extremely disappointed.”

This year the Super Bowl and the halftime show made a lot of history, not all being good. The game had a total audience of 96.4 million viewers on CBS and a bundle of other outlets. It was still the most-watched show of the past year, but it was a multi-decade low for viewership for the big game. On the other hand though, it was the most live-streamed in history averaging 5.7 million viewers per minute, up 69 percent from 2020’s previous high, which could account for why the broadcast views are so low.

After his Super Bowl Halftime Show performance, The Weeknd’s Spotify streams went up by over 200 percent. It’s safe to say the $7 million he invested into his own show paid off. Like pretty much all halftime shows it was a hit or miss, but with this one there was both at the same time.

“I thought this year the halftime show was sick and it was very different from all the others so I was really appreciative of it,” Nash said. “I always look forward to the halftime show, I’m not always a fan of them but they give me something to do while the game isn’t being played.”