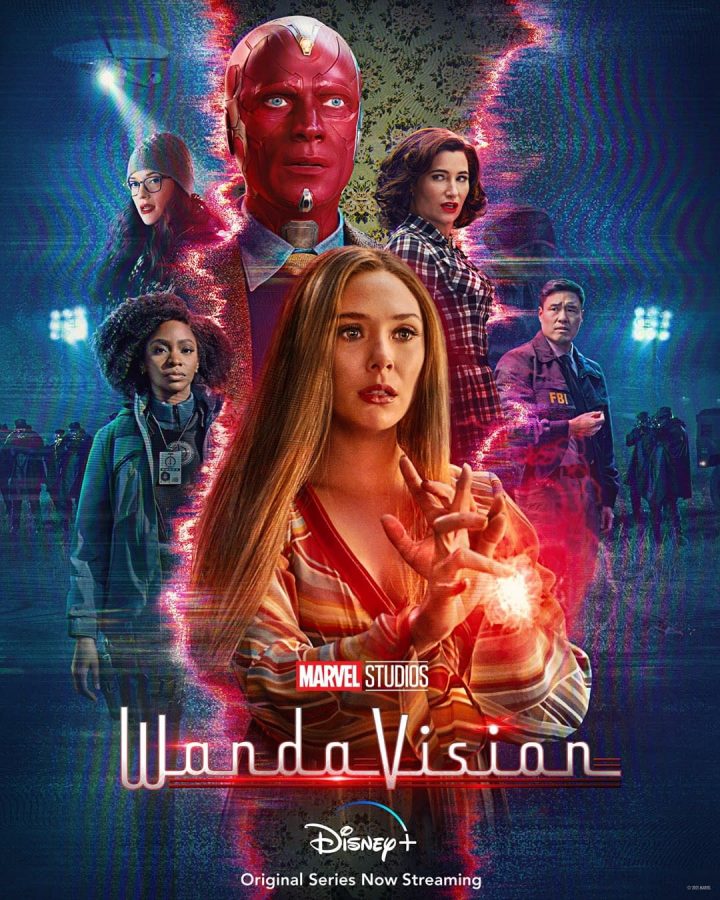 Marvel’s “WandaVision” follows telekinetic Wanda Maximoff (Elizabeth Olsen) and her synthezoid husband Vision (Paul Bettany) as they settle into seemingly ordinary suburban life in Westview, New Jersey. Packed with humor and suspense, the sitcom-style show is enjoyable for both Marvel lovers and those unfamiliar with previous films.

Sitcoms are back — and so are superheroes. Marvel’s “WandaVision” pairs both aspects beautifully in nine mind-warping episodes filled with laughter and plot twists around every corner.

As the first TV show of phase four of the Marvel Cinematic Universe (MCU), “WandaVision” takes place about three weeks after “Avengers: Endgame.” Though non-Marvel fans will still enjoy the show, most aspects of it reference events from previous movies.

The sitcom-style series opens with telekinetic Wanda Maximoff (Elizabeth Olsen) and her android husband Vision (Paul Bettany) as they settle into their idyllic suburban home in Westview, N.J. The couple attempts to blend in with the other residents without revealing their superhuman abilities, despite how many times Agnes (Kathryn Hahn), a nosy neighbor with her own agenda, almost discovers them.

But below Wanda’s seemingly paradisal exterior lies her immense power to redesign reality at the slightest disconcerting event. As the show unfolds, the grimmer undertones become increasingly apparent, and Wanda discovers the truth about herself — and others.

As the pair move on with their lives in each episode, the decades move along with them: the first two episodes bear a grand resemblance to the 1950’s “I Love Lucy” and “Leave it to Beaver” and the 1960’s “The Dick Van Dyke Show,” with sets and costumes almost identical to the ones in those shows.

The third episode, aptly named “Now in Color,” explores the ‘70s in a “Brady Bunch” inspired feel, drawing parallels between both unconventional families. The ‘80s episode is an ode to “Full House” and “Family Ties,” and the ‘90s and 2000s segments draw inspiration from “Roseanne,” “Modern Family” and “Sabrina the Teenage Witch.” They also borrow the mockumentary style of cinematography most famously present in “The Office.”

No matter which decade they are in, though, Bettany and Olsen deliver perfectly timed comedic lines and are able to weave through the changing eras seamlessly. Hahn’s acting is also commendable, with just the right amount of spunk and humor.

Adding onto the sitcom theme, the theme songs of each episode are catchy, each a manipulation of a four-note motif. The words resemble that of the shows it drew inspiration from and fits in with the decade it is mimicking. Most notably “All Along,” featured at the end of the seventh episode, also plays on the motif but adds a darker aura to the previous upbeat versions.

MCU fans can also spot the easter eggs in each episode, particularly in the advertisements. Featuring products like Stark Toaster, HYDRA soap and the Nexus tablet, the show refers to past events in Wanda’s life and hints at possible occurrences in future Marvel productions.

The series is expected to lead into “Doctor Strange in the Multiverse of Madness,” which has a tentative release date of March 25, 2022. With more MCU TV shows to be released on Disney+ this year, “WandaVision” sets a high expectation for the franchise.

Tangled with suspense and parodic elements, Marvel’s “WandaVision ” is a wonderfully crafted illusion and a delightful break from current reality. Though sprinkled with innuendos, the superhero sitcom is sure to be enjoyable for MCU enthusiasts and newcomers alike.