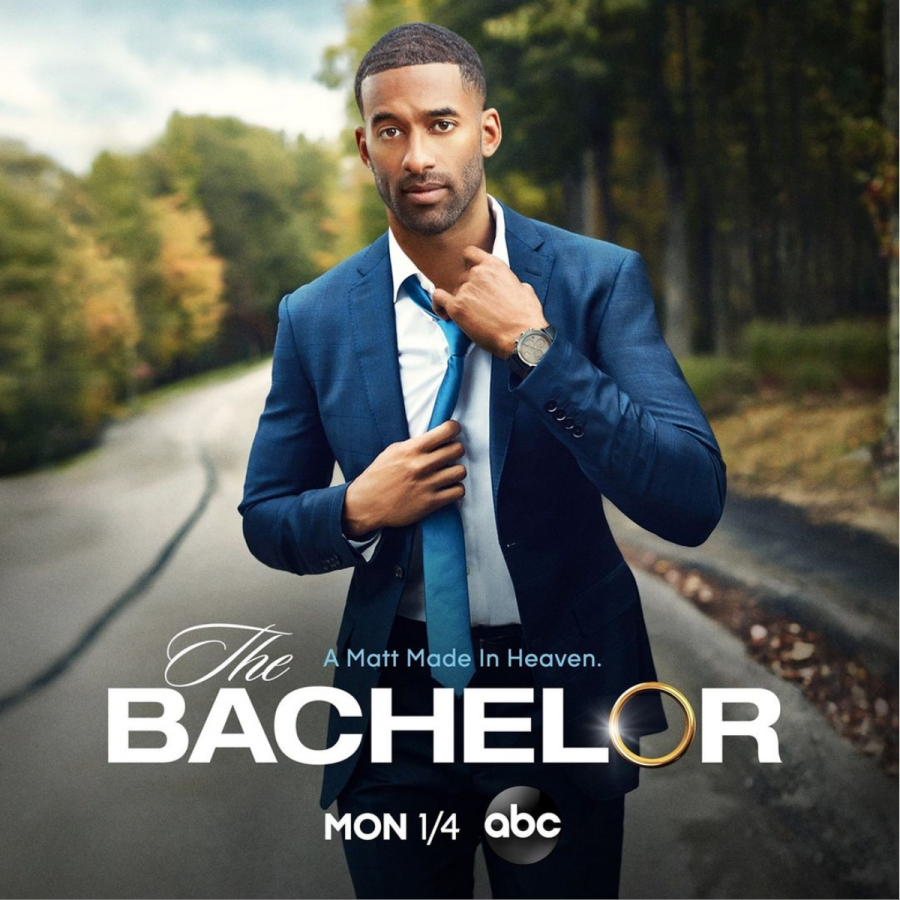 A promotional poster for the upcoming season of "The Bachelor" shows the new lead, Matt James.

43 leads, 41 seasons, 18 years, two formats and one franchise that millions love. The Bachelor franchise, composed of the shows “The Bachelor” and “The Bachelorette,” has amassed millions of fans around the country who sit glued to their TVs each week to watch roses get handed out and a lead we grow to love go on their journey to find love.

Each season is promised to be new and “the most dramatic yet” but in reality, they are all pretty similar and formulaic. New personalities cause different drama and new places bring exhilarating dates, but each season starts with about 30 gorgeous contestants dressed to the nines, then there are group dates, cocktail parties and roses and finally a proposal.

Although the contestants are new people each season, fans are beginning to get agitated by who is consistently cast. It is normally fit men and skinny women with perfectly done hair and makeup. More notably the contestants, but especially who they choose as the lead, are white. For a series that is supposed to show dating lots of different people until you find your one, having so few contestants from minority groups is not a representation of the country and those who watch the show.

The current bachelor is Matt James, a successful real estate agent and charity founder from New York. He is biracial with a white mother and black father. The most recent bachelorette, Tayshia Adams, is also biracial, with a Mexican mother and a Black father. Before both of their castings in July, Rachel Lindsay was the only Black lead ever in the history of the show, a startling statistic when thinking about how long the show has been on for.

The lack of diversity that has occurred in the past was heavily scrutinized this summer as the country grappled with issues of racism and the Black Lives Matter movement. There has long been advocacy for the first Black Bachelor and more Black Bachelorettes, but never as much or as united as was put together this summer. At the beginning of June, an Instagram account @bachdiversity was started that promoted a petition they created to executives on the show.  They advocated for a Black Bachelor, more diverse casts, equitable screen time and a diversity consultant. The movement quickly gained traction from fans of the show as well as former contestants, both white and people of color. Within one week, the petition got 80,000 signatures and immense media attention.

In response to the social media movement, only two weeks after the launch, ABC executives announced that Matt James, an African American man, would be the Bachelor for season 25. They also put a more conscious effort into making sure the contestants were diverse. Of the 32 contestants on the show, 25 identify as BIPOC. This was the first time that white women were not the majority of contestants. Not only is there a lot more racial diversity present this season, more disability awareness is also coming onto the show.

Abigail Heringer quickly became a fan favorite and received Matt James’s coveted first impression rose on night one. She intrigued fans after revealing that she was hard of hearing. She got cochlear implants at the age of two and has also learned to read lips. Her vulnerable admission brought a lot of visibility to the hard of hearing community and started a conversation that unveiled many people who had hidden it. In response, many former cast members of the show, who still have large followings, began putting closed captioning on their Instagram stories.

While the show has made progress in diversity lately, they still have far to go. Many have accused the casting of Matt James to be a cop out for the media backlash that the show was receiving and say they will only feel satisfied after there are continuous efforts made to prove the diversity increase is not a one-off. Unfortunately, recent actions have proven that to not be the case.

Longtime host of the show Chris Harrison defended racist actions by current contestant Rachael Kirkconnell in an interview with Lindsay. Pictures from 2018 of Kirkconnell resurfaced of her attending an Antebellum themed party at a plantation and Rachel Lindsay asked Harrison what his thoughts about it were. He said that the public backlash and call-out over the photo was an overreaction and that he “saw a picture of her at a sorority party five years ago and that’s it.” He pushed back against Lindsay saying that it was a racist party saying “is it a good look in 2018? Or, is it not a good look in 2021? Because there’s a big difference.”

Fans and contestants of the show became infuriated with his insensitive comments. The current cast of diverse contestants of Season 25 put out a joint statement condemning Harrison in which they wrote, “we want to make it clear that we denounce any defense of racism. Any defense of racist behavior denies the lived and continued experiences of BIPOC individuals.”

A significant portion of former contestants also used their platform to comment.

“The photo that [Rachael] was in is racist. The party she attended? Racist,” wrote Bachelorette Tayshia Adams. “When there are blatant forms of racist acts, you cannot be defensive of it.”

In response, Harrison announced that he will not be hosting the upcoming “After the Final Rose” special. Although this action shows the commitment to accountability, the actions by the face of the franchise, Harrison, shows the deep rooted and prevalent ideas of racism and issue of diversity that the show faces.

Diversity in the Bachelor franchise has greatly increased. The kinds of people shows and stories behind them have begun to better represent the audience, but this recent betterment by the show is only the beginning of deep rooted change the franchise faces. Diversity and racism is a huge issue that has plagued the Bachelor franchise, but is one that through consistent positive actions can be overcome.