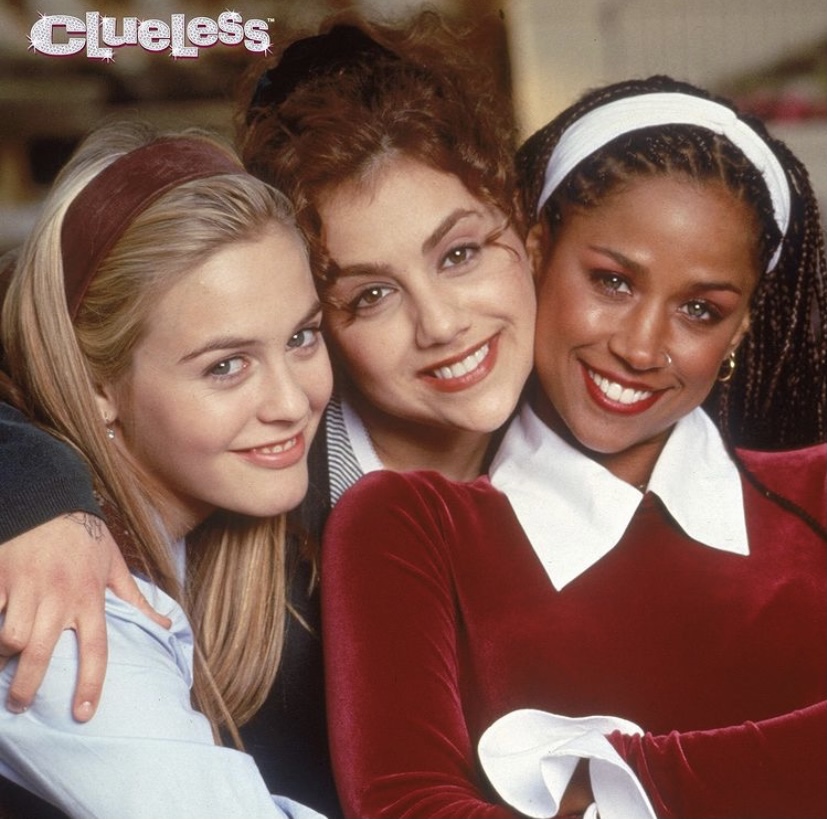 "Clueless" is a 90s classic rom com that revolves around Cher (Alicia Silverstone) a Beverly Hills teen. Friendship was also an important theme with her hanging out with Tai (Brittany Murphy), and Dionne (Stacey Dash) for the majority of the movie.

Valentine’s Day can be a touchy subject for those that don’t have a special someone to celebrate the holiday with. However, a good romantic comedy can get you to laugh, cry, and believe that true love is attainable for all. A rom-com is a specific genre of comedy that is generally lighthearted, filled with everlasting ideas of love and relationships, and ends on a happy note.

Rom-coms have a classic structure: two people meet, and eventually through the course of the movie realize they are meant for each other and fall in love. But rom-coms can have a lot of variety within them; they can be serious or musicals, and a lot of them are based off of popular books or plays. People all around the world create rom-coms to help give the viewer a taste of love that they always imagined for themselves. Here are the ten best romantic comedies that everyone, regardless of relationship status, can enjoy.

Enjoy this 90s classic about Cher (Alicia Silverstone), a sweet and sometimes ditzy Beverly Hills teen who attempts to use her high social standing to find love for herself and those around her. Viewers will love all of Cher’s outfits, with 90s fashion being highlighted in this movie, along with her witty remarks made up of typical Valley Girl slang. This movie is not only about romantic love, but also the importance of friendship, with Cher’s attention to her own love life being constantly pulled away to help her new friend Tai (Brittany Murphy) with hers. A modern version of the Jane Austen classic “Emma,” “Clueless” is the perfect teen rom-com that everyone can enjoy.

Available for streaming on Pluto TV.

Some of the best rom-coms are stories that have been retold and modernized through time. This is exactly the case with “10 Things I Hate About You,” a 90s take on Shakespeare’s “Taming of The Shrew.” Kat Stratford (Julia Stiles) likes “The Bell Jar,” by Slyvia Plath, listening to Riot Grrrl music, and calling out the patriarchal structures that she sees around her. She is not interested in dating anyone at her school, and her father takes advantage of this and says that her popular younger sister is not allowed to date until Kat does. Enter Patrick Verona (Heath Ledger), a new kid known for his rebellious tendencies, who is paid to get Kat to date him. The budding relationship between Patrick and Kat takes the viewer on a ride of love and heartbreak, and makes you wonder: who was really tamed?

Available for streaming on Disney+.

Not only is “The Princess Bride” one of the best rom-coms, it is also one of the best movies of all time. Based off of “The Princess Bride” by William Goldman, the movie follows the love story between Princess Buttercup (Robin Wright) and Wesley (Cary Elwes), in their fight to stay together despite all of the forces trying to pull them apart. With side characters made up of Inigo Montoya (Mandy Patinkin), a Spaniard who vows to avenge his father’s death, Fezzik (Andre the Giant) the kind hearted giant, along with many others in this star studded cast, this movie will make sure that you will be laughing the whole time. Not watching “The Princess Bride” this month would be inconceivable!

Available for streaming on Disney+ and Hulu.

A rom-com list would not be complete without at least one Hugh Grant movie. The king of rom-coms plays Alex Fletcher, a washed up pop singer from the 80s who hasn’t had a hit in decades. After receiving a career boosting opportunity of writing a song for a popular singer, Alex seeks help to write the lyrics of the song, and finds it with aspiring writer Sophie Fisher (Drew Barrymore). Putting their skills together they work to create a hit song, while also bonding romantically in the process. This fun movie is sure to be a family favorite, and has a surprise ending scene that any fan of Hugh Grant will love.

“Love, Rosie” embodies the popular theme of, right person wrong time. Childhood best friends Rosie (Lily Collins) and Alex’s (Sam Claflin) friendship has endured everything, from a surprise pregnancy, to keeping in touch overseas. Over the years their relationship grows and changes, with romantic feelings constantly being pushed aside when something (or someone) else comes into the picture. One of the more serious movies on this list, “Love, Rosie” is sure to make you cry, laugh, and see love through a different lens.

Available for streaming on Amazon Prime.

Americans aren’t the only ones who love a good rom-com, and one of the best teen British rom- coms is “Bend it Like Beckham.” Jess Bhamra (Parminder Nagra) is a first generation British Indian, who comes from a traditional Sikh family. She loves to play soccer, and while playing she meets Jules Paxton (Keira Knightley) who convinces her to join her more competitive team. Sparks fly with her coach Joe (Jonathan Rhys Meyers) and she has to figure out ways to hide her soccer playing from her disapproving family. This movie showcases the beauty of Indian culture, while also critiquing the more stifling aspects of it, and is guaranteed to be a fun watch for all.

Available for streaming on Disney+.

Netflix has been trying to break into the rom-com industry for the past couple of years. With “To all the Boys I Loved Before,” Netflix has created a hit that everyone is bound to enjoy. Laura Jean Covey (Lana Condor) is a shy highschool junior who loves to bake, hang out with her sisters, and write letters to her past loves. When they all get sent out, she attempts to save face and enters a fake relationship with Peter Kavinsky (Noah Centineo), who is trying to make his ex-girlfriend jealous. As the months progress, Laura Jean is forced to ask herself if her relationship is really fake anymore. Based off of the popular book series by Jenny Han, “To All the Boys I Loved Before” captures the wistfulness of being in a relationship in high school.

“Mamma Mia!” is the perfect example of when amazing music makes a good rom-com even better. Set in Greece, Donna (Meryl Streep) is planning her daughter Sophie’s (Amanda Seyfried) wedding. But Sophie has other plans, and invites three men to her home to try and determine which one is her father so he would walk her down the aisle on her wedding day. This movie weaves in ABBA songs throughout the plot, and if viewers enjoy this movie, a sequel came out a few years ago that was also a big hit.

Available for streaming on Peacock and Cinemax.

Always the bridesmaid, never the bride, Jane Nichols (Katherine Heigel) has always been the dependable friend that has been there to help at 27 of her friends’ weddings. A hopeless romantic, and someone that believes strongly in the institution of marriage, she waits for her crush to notice her with no avail. When her flaky younger sister takes the love of her life for herself, Jane starts to reconsider her selflessness that leaves her unable to stand up for herself. During her self crisis she becomes close with Kevin Doyle (James Marsden), a cynical journalist who wants more than to just cover weddings, and sees Jane’s story as a way to further his career. Together they navigate the ins and outs of wedding planning, and help change each other for the better.

Toula Portokalos (Nia Vardalos) is a shy 30 year old who works at her parents Greek restaurant, and who’s unmarried status worries her family. When she falls in love with Ian Miller (John Corbett) she worries that her family won’t accept him because he is not Greek. Together, Toula and Ian fight to protect their love from their prospective family’s opposition. Vardalos wrote this movie partially based on her own wedding, giving the movie a heart warming and authentic aspect to it. Viewers will be able to enjoy the classic aspects of rom-coms, while also learning about the experiences of first generation Americans, who have to balance both sides of their identities.

Available for streaming on Amazon Prime, HBO Max, and Hulu.

Throw on your pajamas, grab some candy and enjoy this list of rom-coms that can fulfill any hopeless romantics dreams.