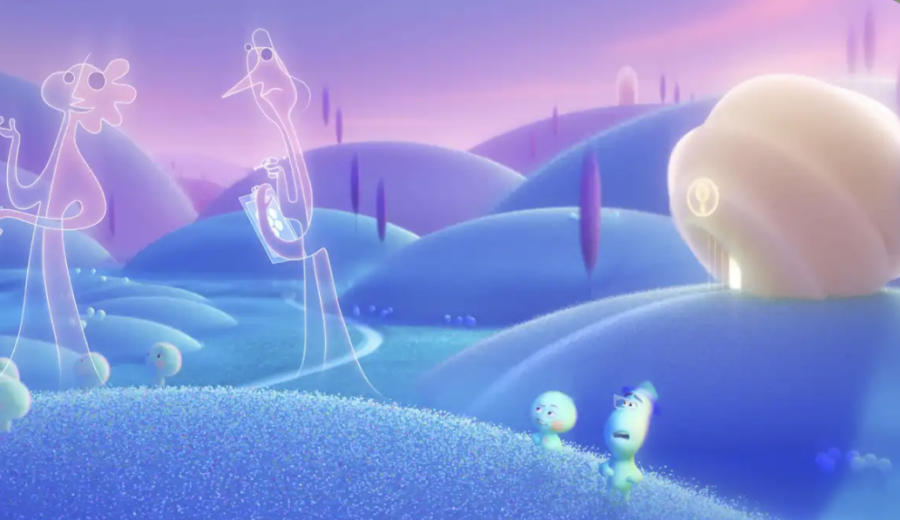 Pictured above, the design of the Great Beyond was one of the most intriguing parts of the film. The contrast it has to the setting of Earth gives it a surreal picture that was very different from the portrayal of the afterlife in other movies.

When companies part from what they are known for, the result is almost never pretty. There is the Amazon Fire Phone, Mobile ESPN (a phone, not the app), the Keurig KOLD, the list goes on. This is no different in the film industry, where studios often attempt to broaden their horizons, only to be met with a subpar score on Rotten Tomatoes. In the past, Disney and Pixar have walked this line with darker films including “Inside Out” and “Coco.” However, “Soul” dives deeper and enters a new depth not previously seen in Disney or Pixar movies.

Despite the fact that Disney and Pixar are known for focusing on lighthearted themes that give us unforgettable characters like Woody & Buzz, Nemo and Lightning McQueen, “Soul” focuses on a more thought provoking concept: the purpose of life.

The combination of it being Pixar’s first film since March and the lack of movies in theatres, “Soul” was highly advertised and had a big reputation to live up to. The two studios also needed it to be a success, as many older fans who had watched Pixar growing up had felt that the studio had lost its touch. Additionally, Disney endorsed its new platform Disney+ by releasing the movie exclusively there for the first few weeks.

In the movie, an aspiring pianist named Joe Gardner finally gets his big break before accidentally falling to his death and into the “Great Beyond.” Once there, he must team up with a rebellious soul named 22 to get himself back to Earth in time before his big concert. However, things don’t always go perfectly, as they run into trouble along the way with the Soul Counter, a worker in the “Great Beyond” who is in charge of keeping all souls of dead people from reentering Earth.

Although one may not be able to tell due to the animation, “Soul” features a loaded cast featuring Jamie Foxx and Tina Fey as the voices of the main characters. Although the two don’t have an extended resumé in the field of children’s movies, a combination of great writing and a very open story allowed for the two to excel.

Going hand in hand with the superb writing and story, the character development of the main protagonists Joe Gardner and 22 is outstanding, and enhances the lessons and meaning of the story being told.

Even though it has scenes that occur in the “Great Beyond,” the majority of the movie takes place in modern day New York City. The setting ended up being a great place for Pixar to take off and explore, as it allows the audience to find some common ground with the events and characters of the story.

Unfortunately, the comical scenes that take up a large part of the middle of the movie are a bit too childish to fit the wide audience Pixar was aiming for. For example, after the two protagonists make their way back down to Earth, it appears that 22 has entered Joe’s body, while Joe enters the body of a cat. This body/soul switch is overused in comedies, and it failed to provide any emotional meaning to the story. The proceeding scenes are full of cheap jokes as 22 stumbles around while having no experience on how to move the human body and Joe struggling to help her due to being stuck in a cat.

The highlights of the movie are mainly the exploration of the “Great Beyond” and what happens before we are born and after we die. Additionally, what will happen to the characters after the movie ends is uncertain, which is the perfect ending for a film that preaches that we have no set purpose in life except to live.

“Soul” marks an important turning point in the reputation of Disney and Pixar. Since their beginning, the two studios have been known as a producer of only children’s movies. However, the deep messages and topics explored in “Soul” prove that the studios are capable of producing movies for a wider audience without compromising the lovable characters and epic stories that many teenagers grew up on.