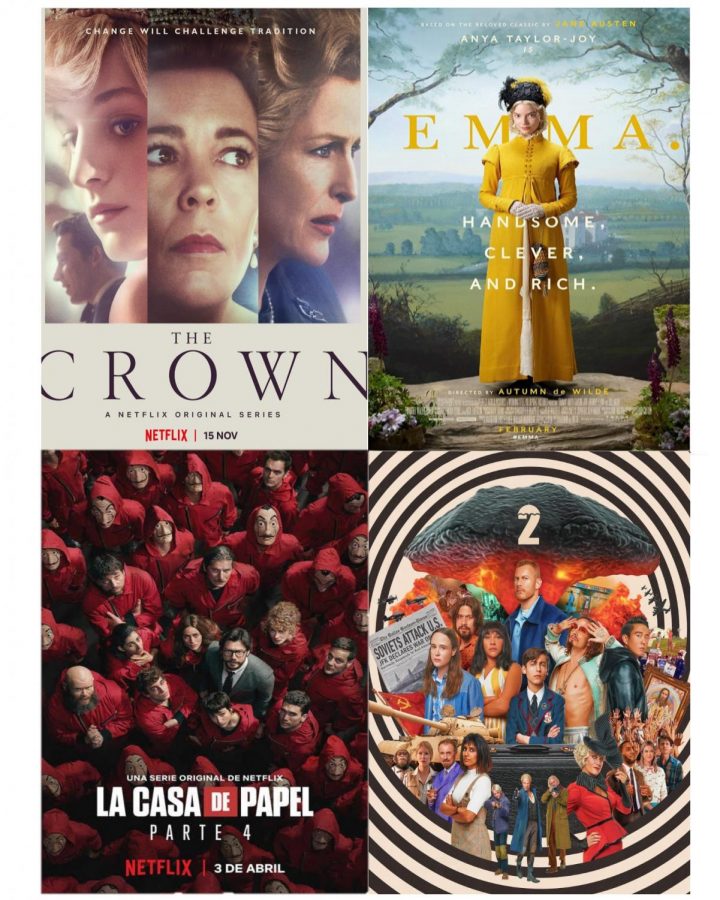 Photos courtesy of @thecrownnetflix, @anyataylorjoy, @lacasadepapel and @umbrellaacad on Instagram

"The Crown," "Emma," "Money Heist" and "Umbrella Academy" are four popular shows and movies that were released in 2020.

2020 has been an odd year for cinema and TV; many major movies that were slated for release in 2020, such as “A Quiet Place II,” “Black Widow,” “F9” and “Ghostbusters: Afterlife,” have been pushed back to a 2021 release. Even though most movie theaters are closed and productions had to stop for months at a time, plenty of great new movies and TV show seasons were still released. With that being said, here are some of The Observer staff picks for the best movies and new favorite seasons of TV from 2020.

“‘Money Heist,’ a Spanish television series that Netflix bought, or saved some might argue, for $2.00, became an international sensation after the streaming giant’s purchase. So, when Season 4 was released in April, amidst worldwide lockdowns, it came as no surprise that 65 million viewers tuned in to watch within the first month of its release, a million more viewers than ‘Tiger King.’ The series has become popular for its dynamic characters, including leads – Tokyo and The Professor – and a plot that is full of as many twists as a high-end roller coaster.” –Jeremy Fredericks, Copy Editor, and new Staff Liaison

“Season 2 of ‘The Umbrella Academy’ came out this year and was a great follow up to the fantastic first season. The show is about a family of orphans that all have superpowers and have to save the world. The second season has the heroes go back in time and not only do they have to fight to save the world but they also fight racial injustice and other issues that trounced the 20th century such as the rights of gay marriage.” –Justin Greenzaid, Assistant Sports Editor

“In my opinion, ‘The Crown’ was the best TV show released in 2020 because of how historically accurate it was and how fun it was to watch. I loved seeing a part of history that I did not live through, and the show was so detailed in what the scenes looked like, and what the characters wore compared to real life. ‘The Crown’ is definitely a must-watch.” –Melissa Redlich, Sports Editor

“‘Big Mouth’ continues to put a fun twist on the adventures of being a teenager and going through puberty. The show was made for a variety of audiences and is something WCHS students and their parents could and should watch together if they want to laugh. The personification of emotions and creativity used in ‘Big Mouth’ is what sets the show aside from other comedies.” –Ryan Weiner, Assistant New Editor

“This drama mini-series was recently released on Hulu. ‘Little Fires Everywhere’ is filled with unexpected twists and definitely kept me on the edge of my seat. It is perfect for people who are looking for a new show without the commitment of it having many seasons.” – Ava Freeman, Online Editor-in-Chief

“Julie and the Phantoms”

“‘Julie and the Phantoms’ was released in Sept. on Netflix and is one of the best TV shows that came out during 2020. It follows Julie who finds her love for music again with the help of three ghosts who died in the 1990s. While it is a children’s show, it is a great watch when you need something entertaining, uplifting and overall fun during the pandemic.” – Jordan Pashkoff, Assistant Online Editor

“‘Tiger King’ was released earlier this year and became an instant hit. Although it may not have been a cinematic masterpiece, the docu-series premiered at the perfect time. Its wild story with crazy twists and turns was able to take the edge off for people during a very anxiety-filled time in their lives.” –Rachel Mattison, Assistant Advertising and Subscriptions Manager

“Killer Inside: The Mind of Aaron Hernandez”

“In 2013, Patriots tight end Aaron Hernandez was arrested for murder. Then in 2017, he died in his jail cell. The documentary was successful like most murderer documentaries. It opened up to the fact that Hernandez might’ve been gay, and other stuff behind his mind.” –Aaron Simon, Photo Manager

“My favorite movie of 2020 was ‘Emma,’ starring Anya Taylor-Joy. This adaptation of Jane Austen’s novel was praised for its costumes, soundtrack and acting.” –Trevor Gardemal, Social Media Manager

In a year when people mostly stayed at home instead of going to movie theaters, there has still been plenty of amazing new entertainment released with the help of streaming services. However, with all the delays and postponements of this year, 2021 is shaping up to be an excellent time for cinema and television.