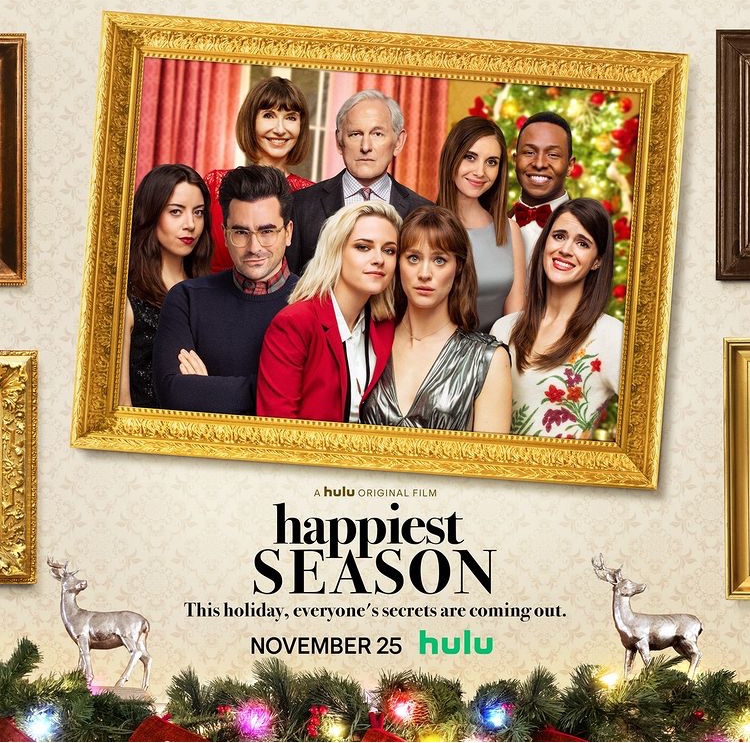 Released on Hulu on Nov. 25th, "Happiest Season" is the first LGBTQ+ Christmas rom-com produced by a major studio.

The most wonderful time of the year is rapidly approaching and holiday season lovers are gearing up by binging their favorite feel-good Christmas movies. This year, a Christmas movie that breaks the cookie-cutter mold is available to viewers: a LGBTQ+ romantic comedy.

“Happiest Season,” directed by actress and writer Clea DuVall, who is a lesbian, was released on streaming device Hulu on Nov. 25. The film centers on Abby (Kristen Stewart) and her girlfriend Harper (Mackenzie Davis) who, on a whim, invites Abby to spend Christmas with her family. Harper leaves an important detail out though: she has yet to come out to her parents.

Shocked, Abby, who was planning to propose during the trip, reluctantly agrees to come even though she is disappointed that Harper has not told her family that they are together, instead saying that they are only roommates. Viewers can understand Harper’s reluctance in coming out as her seemingly picture perfect, but very flawed, family is introduced.

Harper’s mother, Tipper (Mary Steenburgen), who viewers may recognize from her role in “Elf,” is a bit of a control freak and wants to make sure that everything runs smoothly as Christmas approaches and her husband, Ted (Victor Garber), campaigns for mayor. Next, viewers meet Harper’s quirky and often overlooked younger sister, Jane (Mary Holland) and her pretentious and competitive older sister Sloane (Allison Brie). Harper and her siblings compete throughout the film for the attention and love of their parents and strive to be perfect in order to win their affection.

Forced back into the closet and along for the ride, Abby faces many stressful situations like having to watch Harper’s mom set her up with her high school boyfriend, being framed for shoplifting and most upsettingly, having to hide her true self.

Later in the movie, a character played by “Parks and Recreation” alum Aubrey Plaza is revealed to be Harper’s first (and secret) girlfriend from their childhood, named Riley. Interestingly enough, Abby has more chemistry with Riley than Harper but sadly nothing ever comes of it.

Although the film centers Stewart and Davis, the true stars of the movie were Plaza, Holland and Daniel Levy, most famously from “Schitt’s Creek,” who played Abby’s friend John, one of the main sources of the very much needed comedic relief.

While being the first same-sex Christmas rom-com produced by a major studio is a huge milestone, the main focus of the movie was coming out and not just the couple being in love. Almost every movie involving a gay couple focuses on the challenges they face with coming out to their family, but many members of the LGBTQ+ community and allies would love to see a movie where a gay couple can simply exist without having to come to terms with their sexuality in order to be happy.

“For some LGBTQ+ viewers, watching a movie like this resurfaces the horrors of being closeted – I say this as someone unpacking demons of my own after being closeted for 22 years,” USA Today reporter David Oliver wrote in a review. “I didn’t need to watch a movie like this and relive it. This isn’t a knock on DuVall, as the film is inspired partly by her own coming out experience. But a more nuanced, fleshed-out movie could have gone beyond the trite.”

In any movie starring a straight couple, they never have to come out to their families, so why is this trope constantly displayed for gay couples in film? Coming out can be very difficult and is a struggle for many members of the LGBTQ+ in today’s society, but it would be nice to finally see a movie where the gay couple does not have to hide who they are in fear of how their family would react. At one point in the film, Abby literally hides in a closet so she will not be found trying to sneak into her girlfriend’s room.

Viewers may find themselves rooting against the main couple for many reasons. Harper calls Abby suffocating for caring, flirts with her ex-boyfriend in front of her and makes Abby feel like she has to hide who she is. Some of the blame can be put on Harper’s family for making her feel like being a lesbian did not fit the reputation they were trying to uphold, but that does not excuse how she indirectly shows Abby time and time again that she is embarrassed by her.

John convinces Abby to overlook all of this by telling her, “everybody’s story is different. Just because Harper isn’t ready, doesn’t mean she doesn’t love you.” And while the sentiment does ring true, viewers still cannot help but wish that Abby could be with someone who unapologetically loves her.

The title “Happiest Season” was a bit misleading. Viewers spend most of the movie feeling anxious, frustrated and even upset instead of the calming atmosphere that holiday movies typically curate. While the movie accurately depicts the stress that comes with the holiday season, with all chaos going on in the world today, it is unclear if that is what viewers need right now.

Although far from perfect, the film did provide much needed representation and will hopefully inspire the making of more movies starring gay couples in the future.