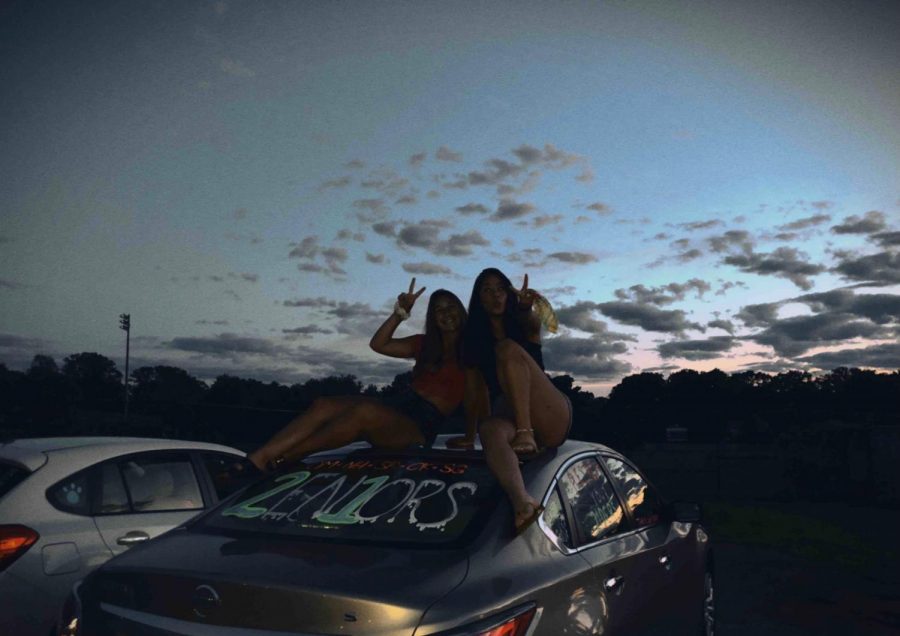 Olivia Meshanko and Natalie Heshmat pose on top of a newly decorated car. Shoshana Rosenthal has been using an app that emulates a disposable cameras in order to make lasting memories with her friends.

In a year like 2020, it is no surprise that students are trying to escape to the past. Single-use disposable cameras, first popular in the 1990s, have recently made a comeback amongst teenagers.

Although they were beginning to be replaced with digital cameras by the time WCHS English teacher Ms. Stephens was in high school, she has fond memories of playing with disposable cameras throughout her childhood.

“They were really good for kids because I couldn’t break them and it was a lot easier than keeping track of film,” Stephens said.

Aside from being novelties used at special occasions, disposable cameras started to decay in her adolescence.

“When I was in high school and when I started college was really when smart phones and camera phones became a thing,” Stephens said. “I’m pretty sure that’s when disposable cameras started to disappear because you didn’t need an extra camera anymore.”

In recent years, however, disposable cameras have made a strong comeback among teenagers. Senior Maeve McGuire purchased one at the end of 2019 after being inspired by her friends.

“I really like how they look and it gives more of an importance to the pictures I take,” McGuire said. “I can’t see the picture right away so it has to be perfect and capture a really good moment.”

Senior Shoshana Rosenthal wanted to enjoy this same experience without the hassle. She uses the app Dispo, developed by influencer David Dobrik, which was made to emulate disposable cameras.

“I didn’t want to go out and buy a camera and have to bring it back and pay for it to be developed, so I looked up disposable apps and then that came up,” Rosenthal said.

Rather than waiting weeks for the pictures to be developed, the app works by allowing the user to see the photo no earlier than 9 a.m. the next morning in order to simulate the experience of waiting for film to develop. It also has the similar vintage look and quality of real disposables.

“I don’t have to worry about losing [the camera] and losing all the pictures,” Rosenthal said. “It’s a lot easier and a lot cheaper.”

Stephens was surprised to see this revival of an old trend due to the fast-paced world we live in today. She believes that back in the day, people were less concerned with the way people looked in the photo, and more about the actual memories of when the photo was taken.

“It’s funny. It’s taking some of the things that were unique to disposable cameras and applying them to a digital version,” Stephens said. “With the way people obsess, right now, over the details of every photo and how everything looks, that same kind of delayed gratification could be beneficial, I think.”

This has also allowed Rosenthal to connect with friends in a creative way. She has an Instagram account where she posts the vintage-looking pictures for her close friends to see.

“Every morning when they ‘develop’ I would send them to my friends — and I really like that because we can relive the day before and people are so excited to see them,” Rosenthal said.

“One thing about the developing time is that you forget what you took. Once I see them I’m gonna remember how fun it was,” McGuire said. “I’ve also asked some of my friends to take pictures with it, so I didn’t even see what it was. It could turn out terrible, it could turn out cool, but whatever it is I know that my friend took it.”

No matter how or when disposable cameras are used, there is no denying that this blast from the past is bringing students together.

“I like that it gives me a reason to go out,” McGuire said. “You [want to] capture good times so you’re more likely to have good times.”