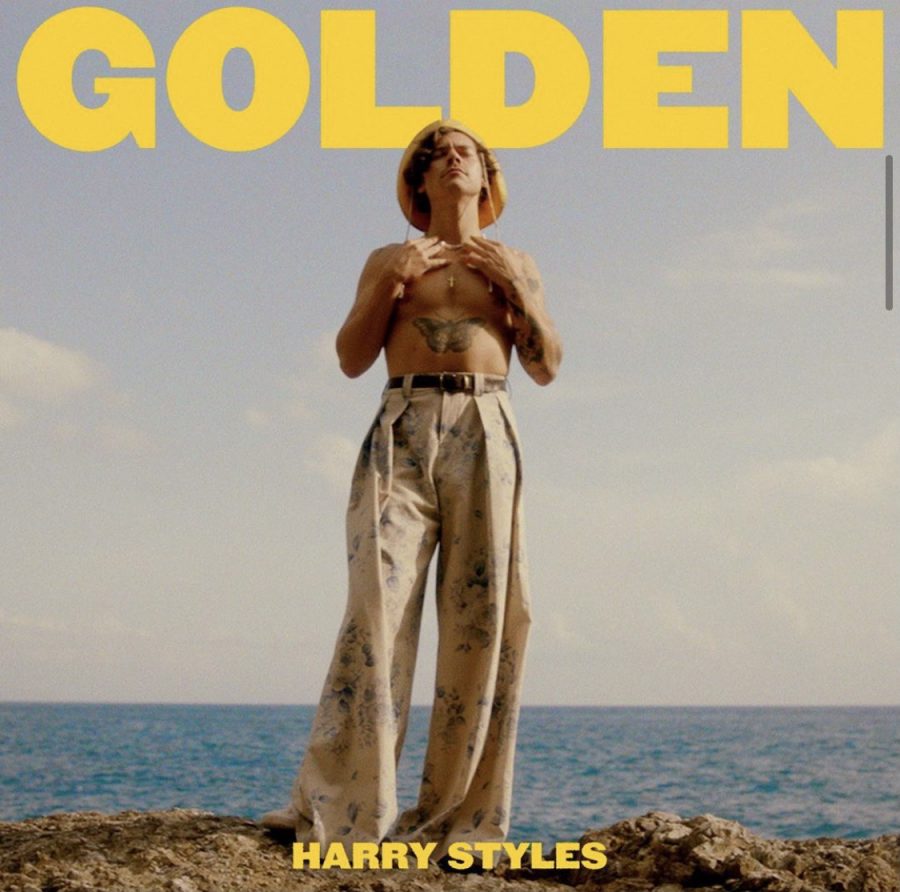 Singer Harry Styles soaks up the sun, wearing nothing but a pair of trousers and a vintage yellow hat, on the Amalfi Coast of Italy. He poses with his eyes closed, standing tall on a rock along the shoreline, during the shooting of the music video for his single "Golden".

Although 2020 has been a year of near-constant turmoil, an unexpected hero has swooped in to turn it all around. Harry Styles, a singer and songwriter, promises us that “we’ll be alright,” in his hit song “Fine Line,” and after the release of a visual accompaniment to his single, “Golden,” we really will be.

Over the last three years, Styles has released two studio albums. His most recent, titled “Fine Line,” was released in December of 2019, has surpassed 2.8 billion streams on Spotify and reached its peak position at #1 on Billboard 200. Now, almost a year later, he has released the album’s leading track, “Golden,” as a single. Along with that, comes a music video that is nothing short of a masterpiece.

The former One Direction member began filming for the music video in September 2020, along the beautiful Amalfi Coast, Italy. On the surface, the video just consists of the singer running, driving down a winding road and splashing in the water. However, his more dedicated fans have begun to dissect each of his artistic choices within the video, and how it paints a bigger picture.

From his sophomore album, Styles released “Lights Up,” then “Adore You,” then “Falling,” then “Watermelon Sugar,” before finally dropping “Golden” as a single. While each of these tracks has a music video to go along with them, fans are most focused on that of “Adore You” and its connection to the music video of “Golden.”

The video of “Adore You” follows a young boy, depicted by Harry, that lives on a small fishing island called Eroda. Styles even created a website, https://visiteroda.com/, to further expand the storyline. In the video, Styles puts rocks in his pockets and begins walking into the current, potentially indicating the desire to end his life. As he walks deeper into the water, he is distracted by a fish that keeps jumping out of the water and does not carry on his plans to end his life. He stops what he is doing, saves the life of the fish and takes it home to begin raising it.

There is lots of speculation about the meaning behind this video, but it becomes more and more obvious after the release of the “Golden” video on Oct. 26. While it doesn’t continue the storyline of “Adore You,” as many fans expected, it does contain a similar theme: fish. At one point in “Golden,” Styles is crouching at the shore and smiles down at the camera, which is filming him from the water. The perspective of this shot is surely from the point of view… of a fish.

It should be noted that the album cover of “Fine Line” is a photograph of Styles with a fish-eye lens. A few conclusions can be drawn from this revelation. Either Styles wrote the song for a specific person or he is speaking to his fans. With the concept of the viewer having the perspective of a fish, it can be assumed that the viewer is represented by the fish in “Adore You” as well. Will all that being said, Styles seems to be alerting the intended viewer that, although as he may have saved them (either his fans or somebody in his life), they actually saved him first.

Even if most viewers are not focused on a deeper meaning, the video still earned 15.7 million views in 24 hours for good reason. This video was directed by Ben and Gabe Turner, two brothers who have a history of filmmaking for One Direction, Demi Lovato, and other highly popular artists. It features bursts of sunlight and gorgeous golden hues, perfectly fitting for the title of the song. Throughout the video, Styles runs down an empty road, a glowing smile on his face.

Before the video was shot, Styles was spotted in late summer on multiple occasions on jogs throughout Rome. There is lots of speculation that he was ‘in-training’ for his big running debut in “Golden.”  The video also includes shots of Styles cruising down the coast in a silver Alfa Romeo convertible, with a pair of Gucci crochet gloves behind the wheel. In his interview with “On Air With Ryan Seacrest,” Styles reveals his potential inspiration for this aspect of the video.

During the same week that he was shooting “Golden,” Styles was also caught with a camera-crew filming him behind the wheel of the luxury speedboat, with the name MARTA I on the back. Perhaps an extended version of “Golden” is in our future.

Whether he is putting out a music video or a 12-track album, Styles never fails to produce a work-of-art. He is an impressive lyricist, esteemed performer, and a clearly talented storyteller. Harry Style is moving in one direction, and that direction is up.