“Dancing with the Stars” returns during the pandemic 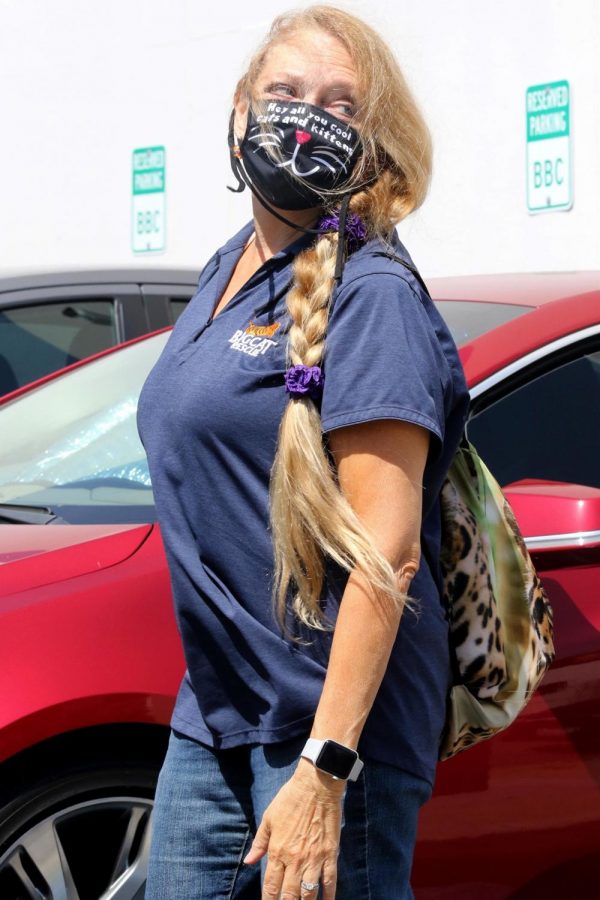 "Dancing with the Stars" celebrity competitor, Carole Baskin, arrives on set for a day of rehearsals wearing a mask. All celebrities are required to wear masks when they are not inside the studio alone.

In a time where everyone is at home, the return of the popular dancing competition show, “Dancing With the Stars,” is a welcomed occasion to relieve boredom and bring back normalcy. Watching inexperienced celebrities give it their all and learn routines is the perfect distraction from the news and what is going on in the world.

With hard work and creativity powering it forward, “Dancing With the Stars” premiered for its 29th season on Sept. 14. Although the show is different from what fans are accustomed to, the essence of the show and the excitement of watching a celebrity learn to dance remains.

“I’m glad the show is taking it so seriously so that they were able to come back,” sophomore Charlotte Norment said. “I was desperate for something new to watch and finally a live show was able to return.”

Not only has the pandemic changed the show’s protocols, it even influenced the set and the stars competing this season. With so many people binging TV over quarantine, many relevant pop-culture celebrities are those from recent hit Netflix shows. An example of this is the most buzz-worthy celebrity competitor this season, Carole Baskin. Pre-pandemic she was not well known but she gained popularity when the documentary “Tiger King” was released in March. The series became a must-watch, filling the holes of excitement and adventure that viewers were missing while stuck in our homes. Baskin became a household name and less than six months later landed herself as one of the fifteen competing celebrities. Other stars that landed their spots due to recent Netflix fame are Monica Aldama, cheer coach of Navarro College from “Cheer,” and Chrishell Stause, Los Angeles real estate agent and actress from the show “Selling Sunset.”

The repercussions of COVID-19 determined which celebrities were willing to take on the role. Rob Mills, ABC Entertainment’s SVP of alternative series, specials and late-night programming, explained to Variety the impact that it has had on casting.

Mills said some stars opted out this season because they were nervous and the exposure that production would cause. But for some, the pandemic and halt of our lives is what is allowing them to compete.

The show has also needed to adjust its set in order to make the viewing and dancing experience enjoyable given the necessary precautions. Normally the show takes place in a theater filled with 850 friends, families and fans, but this season they eliminated the in-person audience. The ballroom had to be redesigned so it would not feel as empty with the absence of a live audience. Producers use camera angles to their advantage to make the space feel smaller and have eliminated the pods where celebrities used to all hang out with each other. They have also put screens from the floor slanted up to the next level which help contribute to an enhanced home viewing experience by having graphics and colored lights appear.

The dancers on the show have had to make sacrifices in order to ensure everyone’s health. Although competitors are not stuck in a bubble, they must social-distance from the other cast members. This makes sure that even if one duo gets sick the virus will not spread to the entire cast. There are three sets of married couples with both spouses competing as pro dancers this season. The precaution separating competing duos applies to these married couples as well, one spouse was required to move out of their house and social-distance from the other for the duration of both of them being in the competition.

Some other changes that had to take place this year were expanding the judges table to allow eight feet between them, and the crew must wear masks at all times. Competitors must wear masks when walking into and around the studios, interacting with others less than six feet away and when not actively competing during the live show. Performers do not have to wear masks when rehearsing or performing with their partners, but all performers are tested for COVID-19 everyday.

Although there are clear differences between this year’s season of “Dancing With The Stars” and previous years, it is great to have it back on our screens. In a time of so much uncertainty, the safe return of the TV show many love is proof of moving in a good direction and approaching normalcy in our lives.

“I don’t even notice the changes most of the time – I just see the show I love to watch,” Norment said.