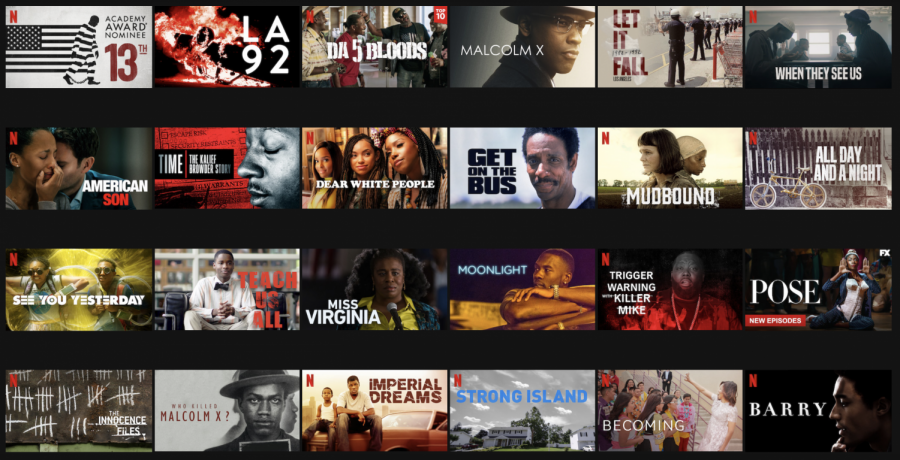 By Olivia Yasharoff and Melissa Redlich

As the WCHS community joins the rest of the country in searching for ways to help others during Black Lives Matter protests, The Observer is here to help. These movies, TV shows, books and podcasts can help those who want to find resources learn more about the history of racism in America and how to be actively anti-racist.

13th, directed by Ava DuVernay, is an Oscar-winning documentary about African American  history and the many faces of racial discrimination in America. Throughout the documentary, Angela Davis, Michelle Alexander, Bryan Stevenson, Cory Booker and many others share their thoughts on topics such as mass incarceration, police brutality and the war on drugs.

Just Mercy is the film adaptation of Bryan Stevenson’s #1 New York Times bestseller, Just Mercy: A Story of Justice and Redemption. Starring Michael B. Jordan, Jamie Foxx and Brie Larson, the movie tells the story of Stevenson and his efforts to fight for the wrongfully accused Walter McMillian. This movie can be rented for free on Amazon Prime until the end of June.

Awarded Best Picture in 2017, Moonlight is a coming of age film about a young gay Black man named Chiron growing up in Miami. The movie is divided into three parts entitled “Little,” “Chiron” and “Black,” and showcases three different actors (Alex R. Hibbert, Ashton Sanders and Trevante Rhodes) playing Chiron, each at a different stage of his life. This movie can be found on Netflix and Amazon Prime

Directed by Spike Lee, BlacKkKlansman is an Oscar-winning movie about the first African American detective working for the Colorado Springs Police Department. Starring John David Washington and Adam Driver, the movie is based on the true story of an undercover cop exposing the Ku Klux Klan. This movie can be found on Amazon Prime and Hulu (with an HBO add-on.)

Becoming is a documentary based on former First Lady Michelle Obama’s autobiography of the same name. The film highlights her life growing up in the South Side of Chicago, her experiences as First Lady and most recently, her book tour and discussions with young students across America. Found on Netflix, this is a heartwarming watch for the whole family.

Whose Streets is a 2017 documentary about the protests in Ferguson, Missouri following the shooting of 18-year-old Michael Brown. The documentary can be found on Hulu and Amazon Prime.

This Netflix documentary is about Cyntoia Brown, a 16-year-old girl who was sentenced to life in prison for killing a man. After serving 15 years in prison, Brown was granted clemency.

If Beale Street Could Talk

Selma is a historical movie about Martin Luther King Jr. and the voting rights march that he led from Selma to Montgomery. This movie is available for free on Amazon Prime.

With three seasons on Netflix, Dear White People is a show about college radio host, Samantha White (Logan Browning,) and a group of other Black students at a mostly white college tackling issues such as blackface and white privilege.

When They See Us

When They See Us is a four part limited series on Netflix. The show is based on the true story of the Central Park Five, five young teenagers from Harlem who were falsely accused of the assault and rape of a white woman in 1989. After watching this, there is also a discussion available on Netflix with the real Central Park Five led by Oprah Winfrey.

Starring Anthony Anderson and Tracee Ellis Ross, Black-ish is a six season long family sitcom. The spin-off, Grownish, starring Yara Shahidi can be found on Hulu in addition to the original.

With its second season available on Netflix now, Pose explores the LGBTQ+ community, AIDS and ballroom culture in New York City in the 80’s and 90’s. According to Variety, “Pose features the largest cast of trans actors on a scripted television show ever.”

Orange is the New Black

Orange is the New Black was one of the first Netflix Originals and is based on the 2010 memoir Orange Is the New Black: My Year in a Women’s Prison written by Piper Kerman. The show offers many unique characters and storylines throughout the series in addition to representation of important issues such as police brutality and the treatment of immigrants in the justice system.

Found on Netflix, this documentary goes through the beginning of Malcom X’s journey for justice, all the way to the conviction of his assassin.

This six-part Netflix documentary series goes through the conviction and case of Kalief Browder, an African American teenager from the Bronx who was sentenced to three horrific years on Rikers Island for allegedly stealing a backpack. This Netflix docuseries highlights the case’s vulnerability and trauma as well as addressing topics of white privilege and police brutality.

This Netflix show, All American, follows the story of students at two high schools. Focused around football and sports, this series shows the recruitment of Spencer James who struggles to fit in at his new school. Created by April Blair, this series is about a teenager who has to face change and discomfort to be able to shine.

Self Made: Inspired by the life of Madame C.J. Walker

Netflix’s Self Made: Inspired by the life of Madame C.J. Walker, is about how Walker (Octavia Spencer), a self-made, barrier-breaking, philanthropist, activist, entrepreneur, and millionaire, came to create a line of African American hair products.

The series The Innocence Files, follows a series of wrongful convictions in the United States. Found on Netflix’s Black Lives Matter Collection this documentary is very emotional and investigative, and looks into the pasts of people whose lives were altered by unfair rulings.

Written by Robin DiAngelo, an anti-racism educator and writer, this book goes deep inside the meaning of racism and why it is so hard for white people to talk about it. This book is nonfiction and can be purchased from many stores including Amazon, Politics and Prose, Barnes and Noble and more. This book can also be found as an audiobook or downloaded onto a Kindle.

Awarded the NAACP Image Award for Outstanding Literary Work in the category of Nonfiction, The New Jim Crow by Michelle Alexander explains systemic racial discrimination and why mass incarceration is considered by some as the new Jim Crow Law. It can be found as a paperback book, an audiobook and Kindle book on Amazon.

The Hate U Give by Angie Thomas

Made into a 2018 movie, the book The Hate U Give by Angie Thomas, follows the story of Starr Carter, who lives in a lower-income, predominantly African American neighborhood while attending a predominantly white private school. Found on Amazon, Politics and Prose or Barnes and Noble, this book displays the struggle of finding your true identity.

I Know Why The Caged Bird Sings by Maya Angelou

Set in 1969, this book is an autobiography describing the life of Maya Angelou, a civil rights activist, poet and writer. This book goes through Angelou’s young life, describing her experiences with abandonment, racism, prejudice and hope. This book can be found on Amazon and other book stores as a paperback, audiobook, and Kindle.

The Fire Next Time by James Baldwin

The Fire Next Time by James Baldwin, a national bestseller, is a series of letters and essays that urge Americans of every race to fight against the horrible legacy of racism. It can be found on Amazon and other book stores.

Produced by The New York Times, 1619 is a series that explores how slavery transformed the United States. Each episode, hosted by Pulitzer Prize-winning reporter Nikole Hannah-Jones, is between 30-40 minutes, and can be found on the New York Times website or wherever you listen to your podcasts (Spotify, Apple Podcasts, etc.)

Code Switch, hosted by Senior Producer Shereen Marisol Meraji and journalist Gene Demby, is a weekly podcast about race and culture. This podcast explores how race impacts every part of society. Found on the NPR app and website, or on other platforms you listen to your podcasts.

The Brown Girls Guide to Politics from Wonder Media Network

Made by Wonder Media Network, The Brown Girls Guide to Politics, is a podcast that talks about women of color in politics. This podcast is hosted by A’shanti Gholar, the Political Director for Emerge, an organization that recruits Democratice women to run for office. Gholar interviews politicians, candidates, and influencers about what they do and current events they are involved in. It can be found on Spotify, Apple Music, or the Podcast app.

Higher Learning with Van Lathan and Rachel Lindsay from The Ringer

From The Ringer, this podcast talks about Black culture, politics, sports and more. The hosts are Van Lathan, former TMZ personality and Rachel Lindsay, who made history as the first African American star of The Bachelorette. It can be found anywhere you listen to a podcast, including Spotify, Apple music, and the Podcast app.

The Introspective Podcast from Nick Asante and Lauren Payne