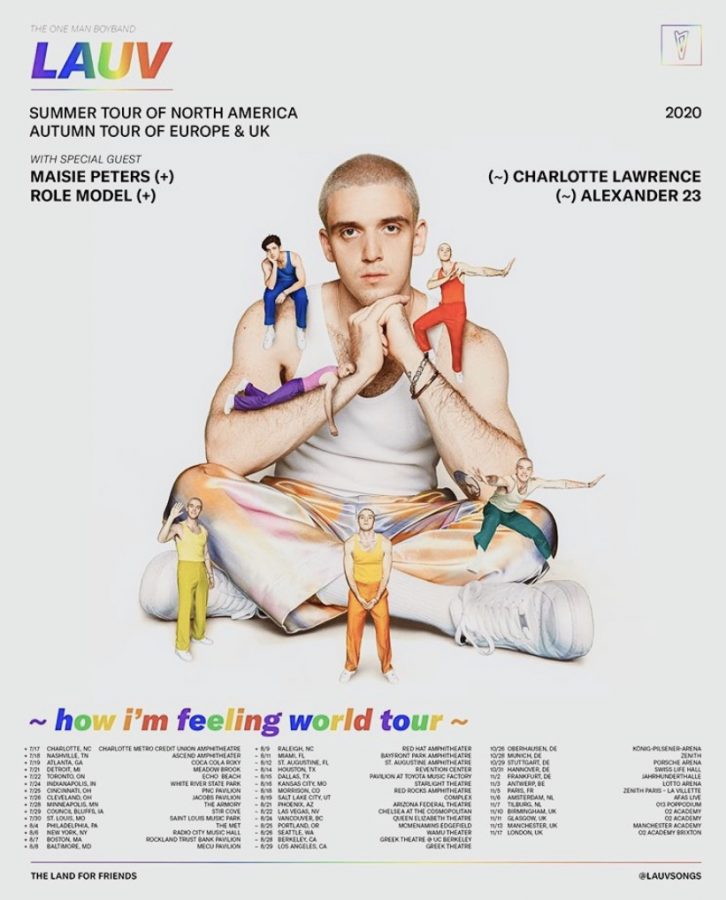 "~how i'm feeling~" was officially released on Mar. 6, 2020, however the hype for the album began months prior to its availability on streaming apps like Spotify and Apple Music. Posted on his instagram account @lauvsongs on Jan. 24 this year, Lauv shares his tour dates with his 1.6 million followers

The Hopeless Romantic (blue), The Existentialist (purple), The Playboy (orange), The Eccentric (red), The Jokester (green), The Optimist (yellow): these are the different versions of Lauv that portray themselves throughout the album “~how i’m feeling~”. The album cover has Lauv sitting in white attire as mini versions of himself pose around him in their distinct colors.

Released on March 6, 2020, the 25-year-old Californian singer-songwriter was suddenly hit by the spotlight for the attention he had received with his hit 2017 track “I Like Me Better.” For this, the song soon went on to be the theme song to the popular 2018 Netflix coming-of-age movie “To All The Boys I’ve Loved Before.” Refraining from one-hit-wonder stardom, Lauv released his well-received album “I met you when I was 18”—a personal favorite to play in playful and easygoing settings.

While “I met you when I was 18” was arguably what enforced Lauv’s place in the music industry, it seems that Lauv had more to say in this newly released album of an astounding number of 21 songs. With so much content on an album, one would think there’s room for numerous bad tracks, yet this is not the case. Additionally, Lauv keeps the album exciting by incorporating other artists such as the internationally renowned K-pop group BTS, Alessia Cara, LANY, and Troye Sivan.

Another one of these artists is Mexican singer-songwriter Sofia Reyes, who had collabed with Lauv to make up the zesty track “El Tejano.” In this, it’s clear that The Eccentric Lauv is present in the song for its spice in the beat and rhythm. Truly, the only way to describe the song is flavorful as Reyes has performs her section of the song in Spanish and infuses a part of her identity in this track tinged with Spanish style.

On the other hand, The Jokester Lauv makes his appearance in “Billy,” a bouncy and upbeat song more or less about Lauv’s past. While the song does touch on the artist’s dark times and rocky bottoms, what makes this “Jokester” is the fact that Billy is, in fact, his dog. The cute addition of seeing his own life through his beloved pet and using his pet’s name like a pseudonym to narrate his life is what makes this specific song a fun listen.

As for The Hopeless Romantic Lauv, he is very present in “Canada” featuring Alessia Cara. Lauv sings “What if we move to Canada and buy some things we don’t need?” and “when they talk about those people who up and leave, that could be us, that could be you and me.” With the subtle husk in Cara’s voice, the dreamy and distant reverb, whimsical harmonies and the acoustic guitar, “Canada” settles as one of my personal favorites from the album.

This short song tells the story of one’s well-thought-out fantasy and dream to spontaneously get up and go somewhere with their significant other. “Canada” highlights and reminds us how powerful our emotions can be to prompt us to get away from our everyday life with zero objective. It’s to say that in the grand scheme of things, it will all be alright as long as there’s that special company.

We see the side of The Existential Lauv in “Sad Forever.” Lauv spills his emotions into this track as he sings about the depression that he has been continuously struggling with and battling against. Lauv sings “Lately I’ve been in the backseat to my own life, trying to take control, but I don’t know how to. I don’t wanna be sad forever; I don’t wanna be sad no more.” As he only slightly touches on his darker feelings in “Billy,” “Sad Forever” exposes a bit more of his obscured self despite still being masked with the faux delight in the atmosphere of the song.

While many of the songs on “~how i’m feeling~” are well-received by public ears for the meaning and their overall vibe, one of the most famous from this album is “i’m so tired…” featuring Australian singer-songwriter Troye Sivan. The track discloses the sentiments one feels towards love songs—perhaps “Lauv songs,” pun-intended—following a breakup: “Everybody around me is falling in love to our song. I’m so tired of love songs, tired of love, just wanna go home,” Lauv sings.

“I’m so tired…” is likely to be written more by The Existential Lauv. However, as much as we can classify Lauv songs from this album to match one of his many faces of identity, sometimes it’s not as easy to classify which of our emotions and what version of ourselves propels us to do what we do.

Said to be born out of an identity crisis, Lauv’s new album “~how i’m feeling~” is a nod to the many facets of ourselves. Interviewed for a Mar. 6, 2020 Teen Vogue article, Lauv discloses information on how he gathered all sides to himself to create an emblem of who he personally feels he is.

“I felt very boxed into one part of my personality. There’s so many other sides to me,” Lauv said. “There’s so much pressure with social media to sort of be something palatable for people, to have a personal brand, which is fine until it’s not—until it drives you crazy.”

“~how i’m feeling~” is an entity of emotion and character, or rather the many emotions that come with his character, as Lauv ultimately embraces who he is as an individual.