“Birds of Prey” flocks to the top 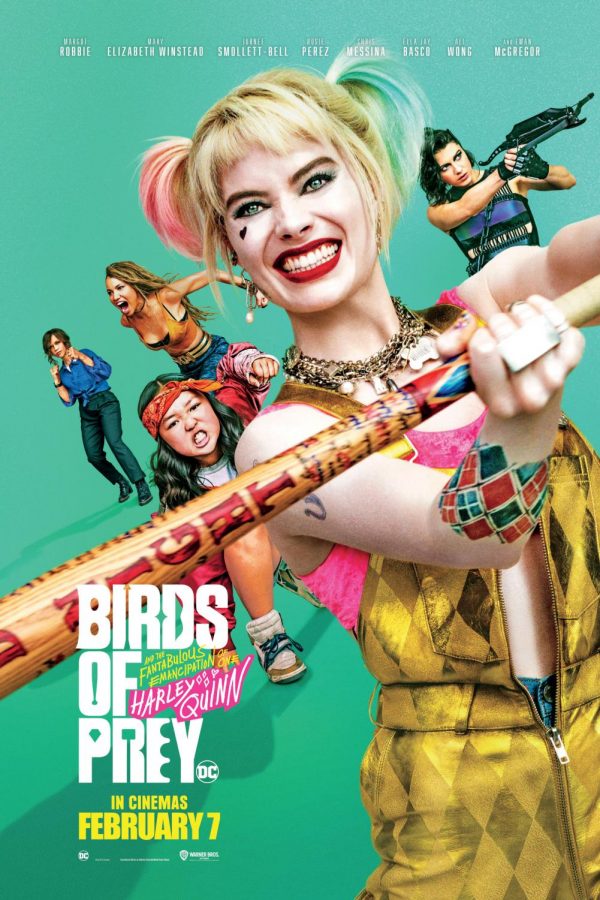 What comes to mind when you hear the word “Superhero,” probably a six-foot-tall cut white guy, and not Margot Robbie. Birds of Prey (and the Fantabulous Emancipation of One Harley Quinn) or its new names as of Feb. 10 Harley Quinn is the newest installment in a Warner Brothers DC extended universe.

The movie is bright, colorful and full of laughs. It’s a great step back from the dark gritty and down to earth Joker that was released in Oct. of last year. The film is a consistent visual treat. Matthew Libatique, Darren Aronofsky’s usual cinematographer, gives Gotham City a cool, smoky sheen, all the better to make the vibrancy of Harley’s colors pop.

The film is full of fourth wall breaks and cutscenes, all of which help mesh the story together and shows Margot Robbie’s sense of humor. It also shows how good of an actress she is and how great she is at adapting to a role at hand whether it be trading punches with the best or worst in Gotham or going on a hung-over rant about bacon egg and cheese sandwiches.

To many people, it may seem like just a fun superhero movie, but it is the first female-led superhero team-up movie, also, it widely believed the main antagonist Roman Sionis is homosexual making him the first gay villain.

It has been a long step to diversity in superhero movies. Marvel has dominated the superhero industry since 2007. Their first movie released was Iron Man. It took them 11 years and 17 movie releases to have a female character named in the title of a movie when they released Ant-Man and the Wasp in 2018. Marvel has only released one female-led movie in Captain Marvel which starred Brie Larson, in April they will be releasing their second female-led movie in Black Widow starring Scarlett Johanson.

After Marvel consulted on the release of Blade Trinity in 2004, which starred Wesley Snipes it took them until 2016, to even introduce a black superhero to their cinematic universe when they introduced Chadwick Boseman’s T’challa. Marvel’s next film starring a person of color will be Shang-Chi which stars Simu Liu an Asian-Canadian actor.

DC Comics, however, made the first splash with the release of Wonder Woman is 2016 which starred Gal Gadot, and was directed by Patty Jenkins. DC may have released the first female lead superhero movie but they have yet to release a movie that stars actors of color.

Captain Marvel, Black Panther and Wonder Woman each grossed over 800 million dollars in the box office, with Captain Marvel and Black Panther both bringing in over a billion. With this in mind Birds of Prey hopes to be the next along the line of successful superhero movies starring or directed by a woman of people of color.

Just remember never to leave your life of being a psychiatrist to date a psychopathic clown, and that Sal makes the best sandwiches in the whole wide world.