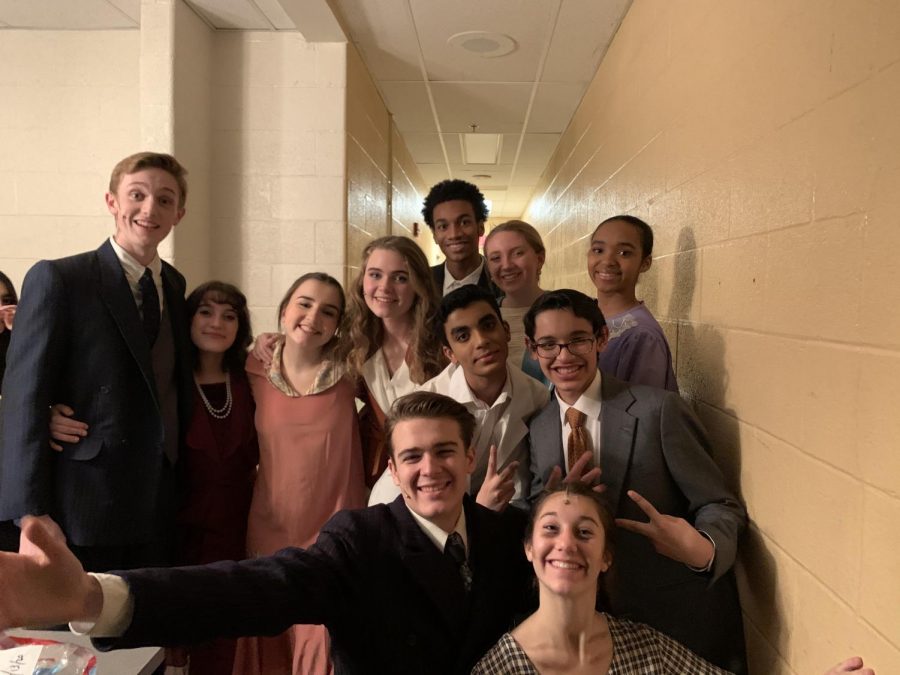 The cast of "Radium Girls" celebrates after the opening night of the show. The play debuted on Feb. 14 and was performed five times.

The WCHS drama department promises a “jaw-dropping” performance with the spring play “Radium Girls,” which opened on Feb. 14. Highlighting a true American story that is often forgotten in history, the show has a strong message of female empowerment and fighting for what is right, similar to this year’s musical “Legally Blonde”.

“Radium Girls” follows a group of women led by Grace Fryer who work at a clock dial factory in the 1900’s. Fryer and her friends, Katherine Schaub and Irene Rudolph, have been instructed by their employers to put a brush filled with radium paint in their mouths to create a fine tip to paint dials on clocks. Although Fryer has some concerns, doctors and scientists convince her and the other workers that radium is harmless. In fact, they say radium is actually beneficial for the health.

However, this is untrue. When workers start to die horrible deaths, Fryer decides to fight for justice and get the compensation she deserves. It’s a race against time for Fryer, as the radium is literally eating her from the inside.

To match the dark theme of Radium Girls, the tech crew created the setting in black-box style where everything behind the top of the set is dark, and the light is focused on the front. The set is split up into three parts, one side of the stage representing the office of Arthur Roeder, the guilt-ridden company president of the US Radium Corporations. In the middle lies the factory where the girls work, and on the other side is Fryer’s house, where she often meets with her fiance and mother.

Student technical director and senior Brandon Schoenfeld has worked in all WCHS productions since freshman year.

“I have been involved in stage crew for four years,” Schoenfeld said. “I have seen that a great set can help elevate the show, and a bad set can really bring it down no matter the talent. Because the set is really the scene and if someone is not quite following the show, they’re looking for that set or lighting or how it’s sounding or looking to get the context. Without that, the shows can get kind of confusing, especially a show like ‘Radium Girls’ where we have so many things happening at the same time.”

The setting is not the only thing furthering the message of the story. Special effects and costumes help truly show how sick the women get throughout the show.

“For the characters that do deteriorate throughout the show, we use their clothes and let them out as they are getting sicker and sicker,” sophomore and costume department member Roya Zafar said. “We work a lot with fake blood and UV paint to represent the radium that they worked with. We also use different types of liquid latex to show how the effects of radium to essentially show how the girls body’s are decomposing while they’re still alive.”

Throughout the show, the girls cheeks become more and more sunken in, and props such as wheelchairs and canes help indicate the radiums effect on the body.

Shows at WCHS range from serious to comical: the very serious show “Crucible” was performed two years ago, while WCHS play “She Kills Monsters” provided a more light-hearted feel.

While there are some comical aspects to this show, such as Grace Fryer’s fiance humor providing comic relief, this play has a more serious tone. However, the actors were able to achieve the emotional parts of the play, and left the audiences angry, sad or happy at various times.

Senior Evyenia Zoulis has been part of WCHS drama productions since freshman year and plays the role of lead Grace Fryer in the play.

“It is a very important part of history, most people don’t really know what happened during World War 1 to women,” Zoulis said. “I think it’s really cool to learn about something that happened in America to normal people.”