“How to Be Safe” explores gun violence in America 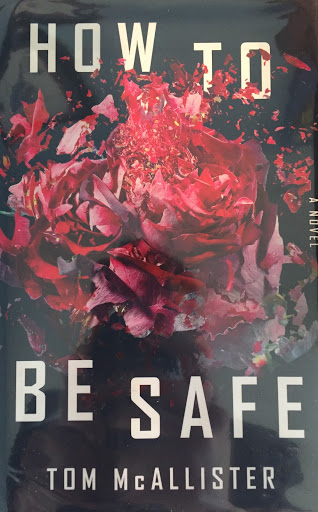 "How to Be Safe" should serve as a warning to all about what could happen in a totalitarian police state.

The world is not always a safe place. There are robberies, drugs, alcohol and shootings. It is hard to be safe all the time, and Tom McAllister’s “How to Be Safe” certainly shows what it is like in 2020.

The book starts off with a school shooting, a horrible and senseless act devastates the small town of Seldom Falls, throwing it into grief and the national spotlight. At first the main character Anna Crawford, a recently-hired teacher at the school is accused of committing the shooting. While this becomes clear that she did not do it, it does not stop the threats to her life. People online threatened her because they thought she did it. The police cleared her name and she did not do it, yet they still threaten her. How can she even keep safe?

After the shooting, the town becomes much more ‘safe’. There are new police officers, drones that monitor the sky and a lot of more people who are following the ‘see something, say something’ rule.

However, this is not good for the town. It makes Anna feel uncomfortable with all the protection. It really is not necessary. It just shows the full power of the police. Every move the citizens make is monitored on a TV screen, allowing the police to know everything they are doing. This takes away people’s privacy. These people are not criminals–they are citizens who want to just be safe.

This book seems to serve as a forewarning of what could happen, if the police are allowed to take over. They would put in tight measures, taking away your freedom. In all good prophecy books, it is easy to connect with a character that is against it, and find out what happens if the citizens allow for a takeover. The police should not have every control of our lives. The citizens need to stand together in order to remain safe. Neighborhood watches are good, drones are not.

Anna Crawford is a no-nonsense kind of person. She was a teacher before the shooting, and has not worked since. She is unmarried and feels kind of alone until she reconnects with her old ex-boyfriend, Robbie.

She is recruited to join a church cult, which is digging a safe space underground. They believe they will protect themselves from an Amargeddon. She stopped caring after a while.

She was recruited to join the neighborhood watch. They found absolutely no criminals committing any crimes. Could the drones watching the citizens every move have something to do with it? She also stopped caring about that one.

The town is small and people know each other. They seem to stay away from her. She has a bad vibe, they think. They think she is crazy. But, she knows what is really going on. If the citizens care for protection only, it takes away their civil liberties and their freedom. Not to mention the takeover of the police.

This book may not be the most realistic example of a totalitarian state, but it is a lot more reliable for the American citizen than pigs running a farm (George Orwell’s “Animal Farm”).

Written in the style of George Orwell’s “1984,” this book serves as another example of loss of control by the people. It has a plot that drags readers in, but look for the warning. It has a relatable character, Anna, who says this is not right. And most importantly, it has a story of what could happen, if the citizens allow a police takeover. Heed the warnings.