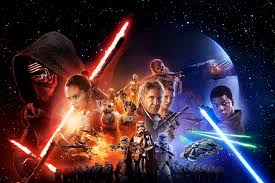 Astounding special effects and beautiful cinematography set this sci-fi franchise's newest film into an universe that is both colorful and terrifying. The end of the modern Star Wars trilogy, "The Rise of Skywalker" serves as a good endpoint despite its flaws.

On Dec.18, audiences worldwide were taken back to a long time ago in a galaxy far, far away with the release of “Star Wars: Episode IX- The Rise of Skywalker.” In less than a month, the long-anticipated film has made Disney a grand total of $936,302,411, with weeks still to go in theaters. The movie, and the current trilogy in general, have been divisive with hardcore audiences, to say the least. Many have harsh criticisms of the film as well as bright praise. Without further ado, here is one Star Wars newbie’s spoiler-free take on the franchise’s newest space-bound adventure.

The first category where Episode IX really shines is, unsurprisingly, in its visual effects and cinematography. Led by Dan Mindel, the film does an outstanding job of providing shots to match the mood. Close-ups during intense emotional scenes show the dirt, sweat and tears on characters’ faces, while wide landscape shots give an incredible sense of scale to this universe, showing how small our band of heroes really is.

The effects are amazing as well, with starships and alien races all looking as real as the actors. The most notable use of visual effects was to provide a fitting end to Princess Leia, played by Carrie Fisher. Fisher unfortunately passed in late 2016 before shooting was complete, though her character still lives on in Rise of Skywalker through the use of superimposition from deleted scenes from other films.

The acting is another high point, with all cast members at their best. A few lines seem out of place here and there, but that’s more because of the plot than anything else. Of particular interest was Adam Driver’s returning role as Kylo Ren. His internal emotional struggles throughout the film are clearly visible through his tone of voice, facial expressions and even shakiness at times, leading to a truly unbelievable performance. Rey (Daisy Ridley) and other main characters were also played as good as always, with the same level of performance seen in the previous films of the trilogy.

The main point of contention was the movie’s plot, and especially the way it fits into the trilogy as a whole. While this review won’t delve too deep into spoiler territory, it’s worth looking into why it is the way it is. After “Star Wars Episode VII- The Force Awakens,” was done, longtime Star Wars director J.J. Abrams stepped away from the franchise to allow Rian Johnson to take control for “Star Wars Episode VIII- The Last Jedi.”Johnson is a very talented director in his own right, behind 2019’s Golden Globe-winning “Knives Out.” However, when Abrams returned for The Rise of Skywalker, it’s widely accepted that he had a few issues with the direction Johnson took the series, and tried to course-correct.

As a result, the entire plot feels very rushed at times. There are events and reveals in the film that seemingly come out of nowhere, with zero foreshadowing in any prior films. Story arcs that should have been fleshed out over the course of all three movies are instead crammed into one, which can be jarring for somebody watching all 3 in a row. The ending, while solid, feels very quick and forced since major conflicts end before they even begin. Better pacing throughout the whole trilogy may have helped this issue.

Overall, The Rise of Skywalker, while just managing to be an alright Star Wars film, is still a great sci-fi film and a good endpoint for the modern trilogy. Plot issues aside, some seriously cool stuff still goes down in  beautifully shot and designed settings and with memorable, believable characters.