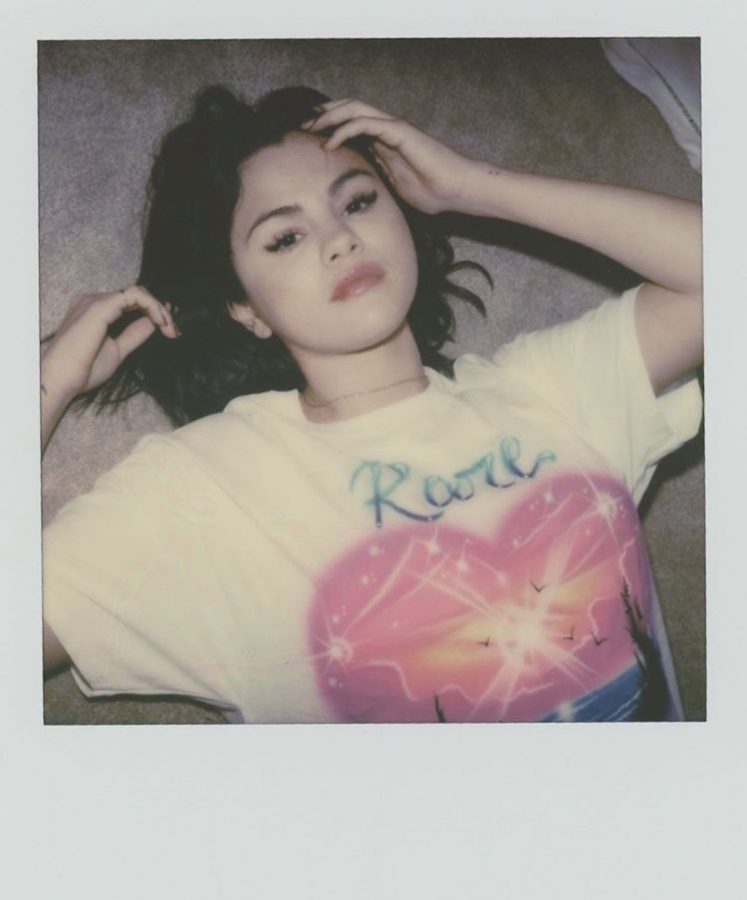 On Jan. 4, 2020, pop singer Selena Gomez posted a picture of a Polaroid on Instagram as part of the countdown to her newest album.

It’s 2020, and everyone’s hoping for better vision and a better year, including pop singer Selena Gomez. After breaking up with Justin Bieber in 2012, dating The Weeknd in 2017 and learning more about herself in the span of four years, Gomez has decided to deliver a gift to the world to hear, her latest album: “Rare.”  The album features 13 songs, packaging four years of Gomez’s life into one album. Her two songs “Lose You to Love Me” and “Look at Her Now” preceded “Rare”, and the former marked the first time that Gomez has hit No. 1 on Billboard Hot 100.

“HERE IT IS!!! My album is officially out in the universe,” Gomez wrote on Instagram on Jan. 10 alongside a picture of herself. “Thank you for the souls that worked on this with me. Now it’s yours. Hope you like it.”

Born on July 22, Gomez is a Cancer-Leo cusper at heart, and it’s apparent in her music. Several of her songs are raw and passionate, as she talks about finding balance in relationships and her tendency to give more than she receives. She wants love but she struggles with trusting the wrong people with her heart. Her willingness to be vulnerable is the secret behind some of the best songs on this album.

The title track “Rare” turns out to be the best of the album. She sings, “Why don’t you recognize I’m so rare? I don’t have it all. I’m not claiming to. But I know that I’m special.” The song is cute and self-empowering yet dark. As the first track of the album, it sets a tone of self-love. She describes a relationship in the past where she was not treated well, and later realized that she’s worth so much more.

“I actually recorded the song early on in the process,” Gomez revealed to MTV News over email on Jan. 10. “And when different things happened in my life and I’d take a break from writing and recording, I still knew that song would be the title of the album. It’s a powerful word.”

“Lose You to Love Me” is a powerful piano ballad and is one of the album’s stand-out tracks. Gomez sings, “This dancing was killing me softly.” Her imagery makes it easy to picture two people dancing, chained to the rhythm of a song that never ends, so close that the only thing they can see is each other but far apart enough that they don’t ever touch. When she sings the chorus, the words “to love me” echo as if she’s in a long, isolated chamber, layered with several vocal harmonies. The harmonies give the song a melancholy touch. This song seems to reference Justin Bieber since she sings that “in two months, [he] replaced [them]” with his then-girlfriend and now-wife Hailey Rhode Baldwin.

“Vulnerable” also has a melancholy touch, as Gomez wonders out loud if falling in love is really a good idea. She sings, “If I show you all my demons and we dive into the deep end, would we drown like every other time before?” She’s afraid of showing someone else the parts of herself that she isn’t proud of, but she’s determined to love anyway. She chooses to “stay vulnerable”, understanding that her vulnerable side is one of her greatest strengths and that she’s brave enough to love even when she doesn’t feel that way.

“People You Know” stands out because it’s not about love; it’s about friendship in general. She sings, “What hurts the most is people can go from people you know to people you don’t.” It’s one of life’s biggest life lessons that many people realize when they grow up: sometimes friends change, and it’s okay to let them go. Gomez tackles this subject with confidence. This is the kind of song that sounds like it’s great for listening to while sitting in a car or while ripping petals off a flower.

“Cut You Off” is the kind of song that sounds like it was made to be heard while running on the treadmill, or while getting over an ex. Gomez sings, “Gotta get you out my head now, I just cut you off.” She says goodbye to a toxic relationship, and seems to reference Justin Bieber when she says he has been “professionally messing with trust”. Her relationship with Bieber was known for always being on-and-off, partly due to trust issues between them. The electronic beat, vocal harmonies, and whispery vocals combine to create a dark, angsty vibe. It’s the perfect pop song and is relatable to anyone who has ever gotten tired of dealing with someone else’s lies.

All in all, this is Gomez’s first great pop album and has something for everyone. The album is catchy, reflective and beautifully written, and it’s refreshing because it seems like Gomez is trying to please herself first rather than everyone else. Gomez turned four years of stories into catchy bops that people could listen to. She’s proven her resilience and her ability to emerge from the other side of a bleak situation with rainbow colors.

Gomez’s story is the kind of story that we all need to hear. She’s right: we’re all too rare to waste our time on the past, and on people who don’t care about us. There are too many reasons to love and appreciate who we are now.