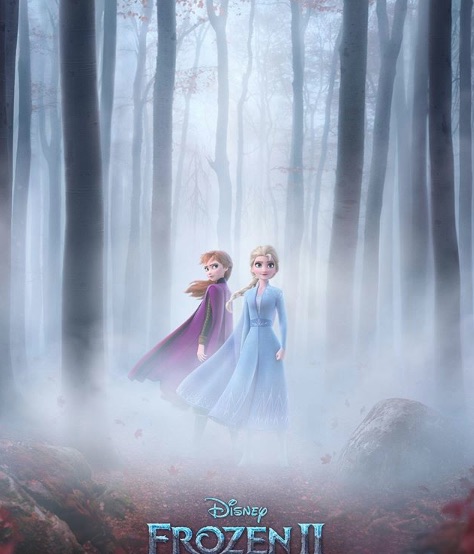 The year is 2013. The WCHS Class of 2020 is 11-12 years old. Barack Obama was the president of the country and the “Harlem Shake” was the dance craze sweeping across the internet. The movie “Frozen” swept across theaters, grossing 1.276 billion dollars in the box office. Flash forward six years– “Frozen 2” entered theaters on Nov. 22, 2019.

With fans of the first movie alienated by time, the film attempted to conjure up the same icy magic that entranced fans in the first place. With few new characters and songs designed to pull at the heartstrings of the audience, it was evident that a formula was being used to create the ideal family film.

Recovering from a six-year hiatus, Walt Disney Animation had a lot of work to do in order to promote the movie enough to draw at the original fans of “Frozen” while also intriguing a new generation of fans. The company spent a whopping 6.29 million on advertising for 1,157 national ad airings on 35 different television channels. Many of the trailers aired were vague, and left  viewers wanting more. Little plot was disclosed, and this built up hype around the release of the movie. These sheer numbers shows that Walt Disney Animation meant business with “Frozen 2”: this movie was built to be a success.

I found myself going into the movie expecting to feel a wave of warmth and nostalgia, to feel that overwhelming feeling of happiness, joy and connection to the characters. I was a die-hard “Frozen” fan just six short years ago, so I was excited to feel that love and passion come back in this film. My expectations were extremely high going in.

To put it out there — “Frozen 2” is not the sequel you dreamed of. It’s not a perfect story, a recreation of the plot of the first movie. While “Frozen” features a story of identity, of the characters growing into themselves, “Frozen 2” features them using their newfound identities to help the common good. If you go into the movie expecting a perfect sequel, you will not be impressed. However, the charm of “Frozen 2” is that it aged with its fans; the movie tackles tough issues and conflicts such as time, change, intimacy and solitude that resonate with high schoolers, college students and even parents. The characters grew up; the plot grew up– the maturity of the movie was remarkable.

With this being said, the film also managed to be whimsical and juvenile enough to engage a new generation of fans. There were jokes for older and younger viewers alike, and the movie managed to strike a perfect balance between the two, making it enjoyable for all. The theater constantly erupted into laughter both times I saw the movie, and that proves that above all, the film did exactly what it needed to do: entertain the audience.

The premise of the movie (no spoilers yet, I promise) revolves around Elsa, Anna and the group embarking into undiscovered territory in an enchanted forest locked in time. Time is one of the most central themes of the film: time passing, wisdom growing with time, the impact of time of relationships and the idea that time and change are not necessarily bad things. This message hits hard, especially for WCHS seniors preparing to leave their high schools years behind and begin another chapter of their lives.

The plot itself however, had much to be desired (SPOILERS AHEAD). It reminded me of almost a crossover in between “Frozen,” “Moana” and “Avatar: The Last Airbender,” and it felt like I knew what was going to happen. While yes, happy endings are good, I found myself looking for that twist moment, like Hans turning out to be the villain in the original movie. In the end, everything resolves itself: the kingdom restored, forest freed and the people of Arendelle and Northuldra resettled back in peace.

For all of the characters with the exception of Anna (Kristen Bell) and Olaf (Josh Gad), the character development was limited. Kristoff (Jonathan Groff) was a character tainted by flaws, with his main role being to mess up. While this did give Anna the moment to shine, his stupidity was almost distracting from Anna’s character growth. Watching him continually get flustered and mess up his attempted proposal was almost painful to watch, and frustrated me as the viewer. Elsa (Idina Menzel) knew exactly what she had done, and how she had pushed her limits too much only to have Anna save her again, yet she acknowledged that it might happen again. For a movie that tied up the entire plot with a bow, the characters themselves had much to be desired.

There is something to be said though, about the stunning visual effects and graphics of the film. One scene in particular, Elsa belting the dramatic piece “Show Yourself,” depicts Elsa in a frozen wasteland watching a montage of the history of Arendelle. The views were breathtaking and extremely detailed. Almost every scene in the entire film was set on a gorgeous Arendelle natural background, and this elevated the quality of the film. One of the most remarkable scenes featured the jaw-dropping wonder of an animated depiction of an Aurora Borealis, with bright colors lighting up the dark forest sky.

A focal point of both “Frozen 2” specifically and the franchise as a whole is the soundtrack. Although often unrecognized, the movie is complimented by a wonderfully fitting music score, composed by Christophe Beck. Every scene had perfectly paired music, with dramatic swells and emotional slowness. “Frozen 2”’s soundtrack is extremely unexpected, with songs that sound both eerily similar to the first movie, but also paired with songs that have a completely new sound and theme to them.

Take “The Next Right Thing” for example. This dramatic ballad showcased Anna’s battle with overwhelming sadness and depression, and how she gained the courage to continue going on her journey. With these mature themes, the song felt slightly out of place in context of the rest of the soundtrack. Its slowness and dramatic mood drowned out much of the happiness in this part of the film, which drew away from the lightheartedness of the rest of the plot.

However, “Into the Unknown” sounds like a wonderful blend of “How Far I’ll Go,” from Moana and the chart-topping “Let It Go” from the first movie. The sheer power in this song makes it catchy and empowering; I can’t help but feel like I can take on the world each time I listen to it.

A flaw in this song, and many other songs on the soundtrack, is the humming of the voice of the forest (AURORA). While additive to the plot, the voice is extremely haunting and borderline creepy, and it lingers on many songs including this one and “Show Yourself,” the two most popular songs off of the soundtrack. It feels unnecessary to include the voice in every song, and prevents them from soaring on the top music charts.

“Frozen 2” managed to do something incredibly hard: engage all viewers, young and old alike, captivate them with breathtaking animation and music, then leave them with a lasting takeaway and the potential for discussion. Not too shabby, Disney– six years definitely not wasted.