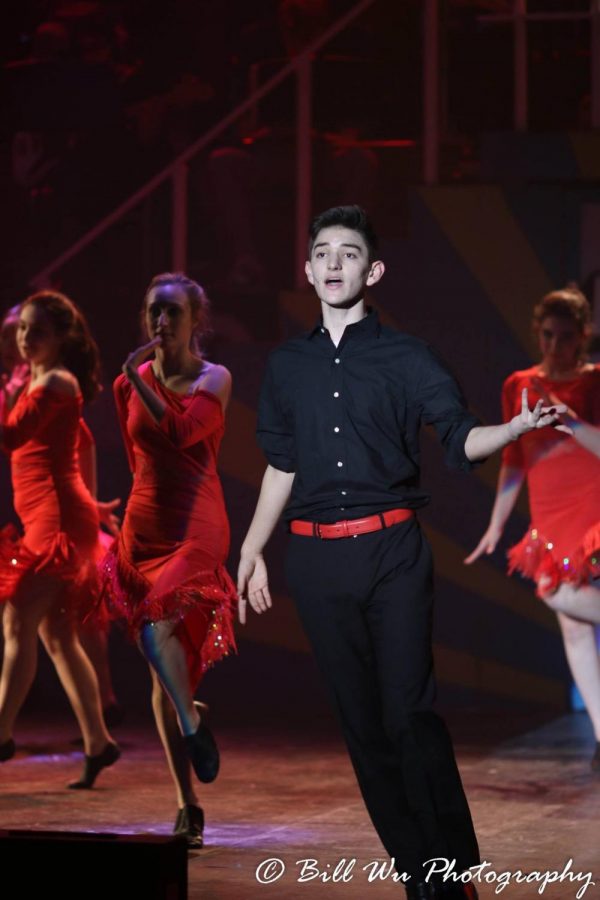 Senior Michael Castelli started dancing when he was entering high school, and is completely self trained. He is the co dance captain of BLAST and Showstoppers, as well as a choreographer in the school musical Legally Blonde.

As the dancer’s turns begin to grow faster, the audience follows, completely mesmerized. Finally, he leaps into a death drop as the song hits its peak, and the audience cheers loudly.

Senior Michael Castelli first gained interest in dance after attending his sister’s dance competitions. Soon, he found himself spending hours in his basement on YouTube, learning how to dance. Before he knew it, he was joining the Nonprofit Organization TAP.

“I started [dancing] eighth grade going into freshman year,” Castelli said. “I started with this organization called Teen Angel Project, where we sing and dance for people that are in need.”

Contemporary, lyrical and jazz are Castelli’s favorite styles of dance. However, working in musical theater is something that intrigues him as well. Castelli is one of the choreographers of “Legally Blonde” the Musical, an upcoming WCHS school play. Active in school programs and productions, he is the co-dance captain in BLAST and in Showstoppers, a WCHS choral program where students sing and dance. Although the auditioning process for these parts is difficult, for Castelli, it is all worth it.

“My dream was to become dance captain senior year, so now that I have finally achieved that, it’s really been great, ” Castelli said.

Although Castelli should have gone to Wootton, he came to WCHS for Blast. Blast is a student-run performance where students sing and dance. It is unique to WCHS, and part of the many great art programs that WCHS offers.

“I came here for Blast,” Castelli said. “Blast is like my life, and honestly, without Blast, I don’t really know what I would’ve done.”

Being co-dance captain helps to showcase both Castelli’s leadership skills and dancing abilities. His influence can be seen on all of the numbers he choreographs, and helping people improve their dance skills comes naturally to him.

“Michael is a very talented dancer and choreographer as well as a wonderful student leader,”  choral teacher Matthew Albright said. “His leadership skills are great, and is full of potential for the coming years.”

Although Castelli has worked his way up to a high position at Showstoppers and BLAST, it wasn’t always easy. Being one of the few male dancers, he had to face bullying from people who didn’t accept him.

Castelli has grown as a performer, gaining more skills and confidence in his abilities over the years. Not only has his dancing improved, but his singing and acting have also become a factor in his performing. He performed in Young Artist’s of America version of “Annie’s Got Your Gun” at the Strathmore and had a solo piece performing “La Vida Loca” in Blast 30. He also plays Kyle the mailman in the school musical “Legally Blonde”.

Junior and co-dance captain of Showstoppers and Blast Sydney Rubin has known Castelli since she was in eighth grade and had a performance in BLAST. Because she is more hip-hop based and Castelli is more contemporary based, together, they create dynamic pieces that audiences love. Over the years she has seen both his confidence and his talent grow.

“Over the past couple of years his dancing has really grown, and so has his confidence in his singing, so I think that as a performer, his abilities have all grown so that he can become a triple threat,” Rubin said. “He puts 100% in, and  he gets 100% because everyone loves to see what he can do.”

Despite the fact that Castelli’s background in dancing started off as self-trained, last year, he began classes at YA where he met one of his biggest inspirations⁠—Maddie Rodrigue. She has recently become a Rockette, part of the famous dance group that performs in Radio City Music Hall, and her passion and drive helps propel Castelli forward in his own dancing. The work she put into her dancing greatly inspires Castelli.

Although Castelli plans on pursuing engineering, he intends to either switch into dance later in his college career or to keep it as a hobby. Castelli plans on sticking with dancing no matter what because of how it allows him to express himself.

“Dancing acts as an escape for me and has always been there for me,” Castelli said. “It’s the best friend anyone could ask for. It allows me to put feelings into motion no matter the mood; it connects me to something beyond myself.”