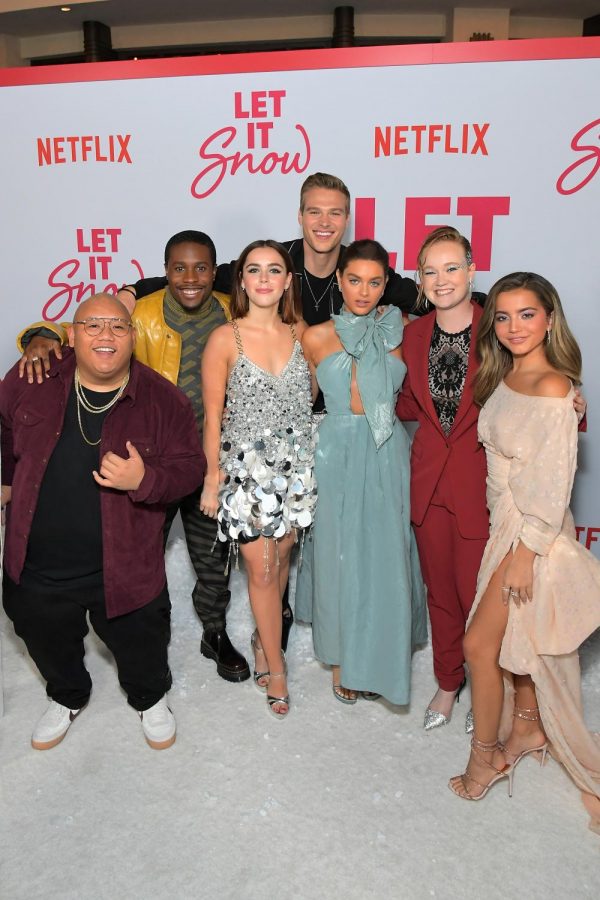 The cast of Netflix Original “Let it Snow” poses for a photo at the premiere. The movie is based on the book by authors John Green, Maureen Johnson, and Lauren Myracle

Let it Snow is a classic holiday movie with a twist—there are three different point of views. Told from the eyes of three young adults, Let it Snow allows the audience to get a glimpse into their lives.

Based on the young adult book by John Green, Lauren Myracle and Maureen Johnson, Let it Snow features three stories of young adults tied together by a snowstorm on Christmas Eve.

Julie (Isabela Merced) is a young adult applying to college. After her train loses power, she ventures out in the snow to the Waffle House with pop star Stuart Bale (Shameik Moore) and finds herself with a hard decision to make—and maybe a small crush.

Tobin (Mitchell Hope) is a slightly awkward teen stuck in the friend zone with the Duke (Kiernan Shipka). After a stolen keg, Tobin and the Duke venture on a journey through the snowstorm to make it to the Waffle House (without getting caught) and discover new things about each other.

Addie (Odeya Rush) and Dorrie (Liv Hewson) are best friends dealing with their own problems: Addie with a distant boyfriend and Dorrie with a crush on a closeted cheerleader, who happens to also show up at the Waffle House. After a fight between the two, Addie’s left stuck in the snowstorm with Tin Foil Woman (Joan Cusack) and Dorrie deals with mixed signals from her crush.

And among this web of blushing lovers is Keon (Jacob Batalon), a hopeful DJ who just wants to throw a good party.

The movie features strong female leads, like the characters of Julie and the Duke, who do more than provide comical effect. Rather than the typical presentation of females throwing themselves at a well known pop star like Stuart Bale, Julie is more focused on college and her sick mother. As for the Duke, she loves adventure and isn’t afraid to say what she thinks—a refreshing take on a female lead in holiday movies.

Let it Snow is also filled with diverse characters with different sexualities, socioeconomic classes and ethnicities, which isn’t that surprising considering that it is a Netflix original. The film makes it easy for a wide range of teens to relate to the characters and get into the traditional holiday spirit.

However, the movie is cliché and reminiscent of a majority of holiday movies. The plot is extremely predictable where everyone ends up with someone. This idea of a perfect, romantic Christmas is stereotypical of holiday films and tends to get repetitive. Despite this, Let it Snow Has is still enjoyable and the humor outweighs the overused plot.

As Let it Snow is based on a novel, it differs from the book in many major ways; audiences who have read the book may feel disappointed in the major shifts of characters. However, while these changes are prevalent, this does not necessarily mean they are inferior—Let it Snow is a prime example of the movie being better than the book. The film does a better job in presenting the plot in a more developed fashion, each story more closely intertwined. The meeting place isn’t a trendy Starbucks— it’s a place not franchised and closer to hearts, the Waffle House.

Filled with romance and delivered humorously, Let it Snow is an entertaining winter movie that manages to make its audiences laugh, while also capturing viewers’ hearts and the essence of the holiday spirit: spending time with those you love.