Lobby Baby: Seth Meyers in this Netflix special lives up to expectations 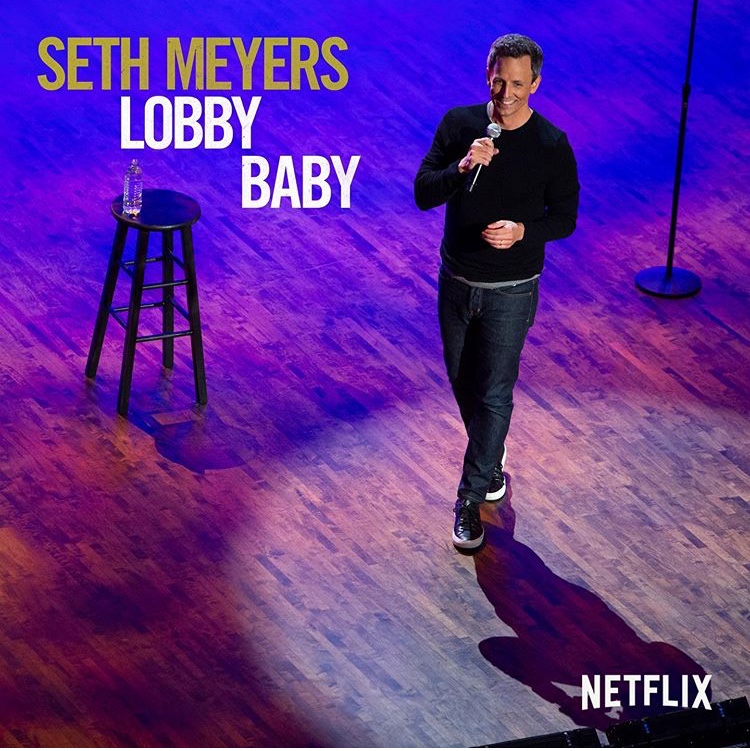 Joining fellow comedians John Mulaney, Leslie Jones and Dave Chappelle, Seth Meyers debuts his own stand-up comedy special on Netflix, stepping away from his usual desk scene and leaving his suit behind.

Being the host of Late Night with Seth Meyers for five years, Meyers mixes things up with his very own comedy special titled Lobby Baby filmed in Minneapolis. The sometimes political, sweet and straightforward 61-minute special released on Netflix on Nov. 5.

Unlike all other late night shows, Meyers always performs his opening monologue behind his desk, just like how he used to when he co-hosted Saturday Night Live’s “Weekend Update.” So it may be unusual for his fans to see him actually stand whilst performing stand-up comedy.

Early on in the special, Meyers explains to viewers that his first son was almost born in the back of an Uber. He then goes on to tell the story of how his second son was born, which happened to be in the lobby of his apartment building– hence the title, Lobby Baby.

“You might be saying to yourself, ‘Seth, you just told us that you watched the birth of your first child from a vantage point, wherein you might actually have learned something that would be helpful in the birth of your second child,” Meyers said. “Hopefully you’re about to tell us how helpful you were.’ Sadly, I am not.”

Meyers also shares stories of his childhood and his relationship with his wife while at the same time mixing in some political jokes. Similar to skipping the intro to a show on Netflix that you have seen over and over, Meyers gives Netflix watchers who are sick of jokes about President Donald Trump the option to literally “skip politics” with a button.

“I just liked it as a joke and then realized after the fact that it had actually secretly been a really good marketing idea,” Meyers told the Los Angeles Times.

This turned out to be a good marketing idea for Meyers because the button created a lot of buzz and disagreement, enticing more people to watch his special. Once the viewer presses this button, Meyers makes an intriguing allusion to Trump that gives viewers no choice but to go back to hear what he said. This idea is a very creative use of the technology that Netflix provides and not nearly as controversial as it was made out to be.

In the political segment, Meyers recounts hosting the 2011 White House Correspondents Dinner, during which he poked fun at current President Trump with former President Barack Obama. He jokes about how people blame him for Trump running for office out of revenge solely because of that one event.

To close his show, Meyers performs his stand-up from the perspective of his wife, Alexi Ashe Meyers. During this bit, Meyers presents a hilariously different perspective of himself through self-deprecating humor and allusions to earlier jokes in the show.

“I do not do [stand-up] professionally because unlike my husband, I do not live my life in the desperate quest for the approval of strangers,” Meyers said, impersonating his wife.

Meyers’ content usually consists of political satire and current events, but with this special viewers get to see a new side of his humor through a self-deprecating style and descriptive storytelling.

From the “Weekend Update” desk at SNL to the Late Night Show and finally to the stage, Meyers proves that when it comes to comedy, he can do it all.