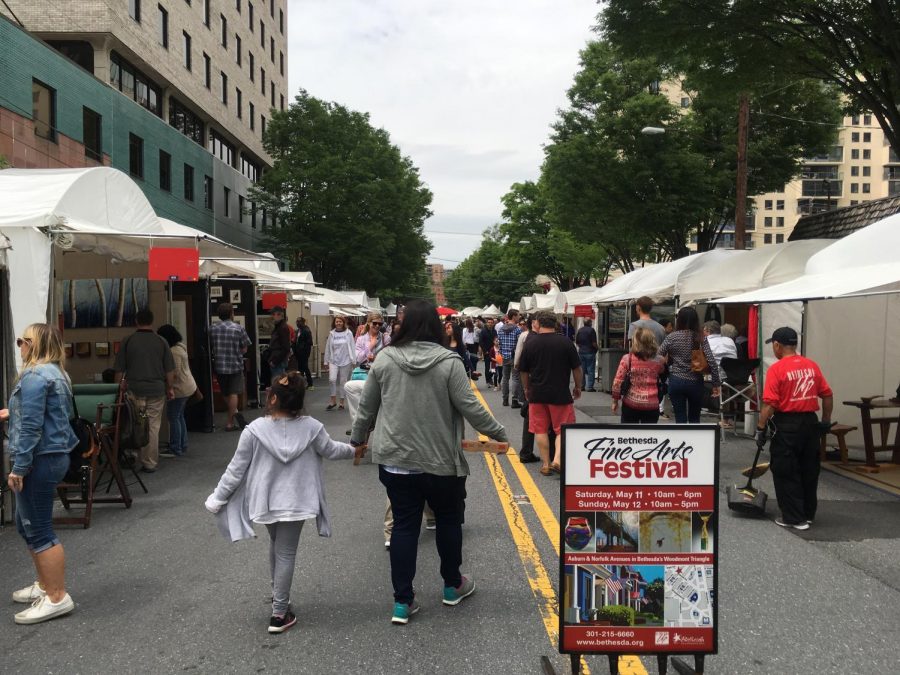 A view of the entrance to the Bethesda Arts Festival.

Imagine a festival that celebrates the arts and accomplishments of various artists. Such a festival exists, and were held on May 11th and 12th called the Bethesda Arts Festival. It was hosted along the streets of Bethesda’s Woodmont Triangle.

The festival consisted of many different booths featuring various artists. The booths were essentially large carnival-like tents and served for whatever the artist needed. Some booths purposed as small art exhibits and others as pop-up shops. Each booth showcased the unique talents of the artist and helped exhibit the artists’ work to the general public.

Although many were exhibited paintings, there was a large variety of artwork on display. Not every booth showcased traditional artwork. In addition to this, the artists were not exclusive to the Bethesda area. Many came from different states such as California, Washington and Florida, and even some international artists.

Some booths displayed glass sculptures and others displayed works of ceramic. There were multi-media display booths, which exhibited neon posters and custom wheels. An unique fashion aspect was also incorporated into the festival, as some booths presented dresses, scarves, and even ties. Many booths also exhibited exquisite jewelry such as necklaces, earrings, and rings. There were even different themes of jewelry, such as daft punk or nature-like jewelry. Photography booths were also prominent at the festival, and  photographs on canvasses were put on display. Each and every piece of artwork displayed a style unique to the artist, and all the artwork was tastefully and meticulously hand-crafted.

In front of each tent the featured artist was present, greeting passerbyers. Not only were people able to see the art on display, but they could meet the actual artist and ask anything they wanted. This gave a certain sense of familiarity and face-to-face aspect with the featured artist that many art exhibits and festivals lack.

The festival also had many local sponsors ranging from Bethesda Magazine to the Bethesda Blues and Jazz Supper Club. These sponsors also had non-related art booths, where festival attendees could take a look at other products and services. However, every sponsor was local, giving these booths more of a community feel rather than a corporate one.

The location of the festival was amazing as well, as it was held in the Bethesda area where many different restaurants and shops are located. Since the festival was held along these streets, people could easily exit and get food from surrounding restaurants. The festival even provided free parking, making it extremely convenient for people to commute to and from the festival.

There was food and entertainment, all of which were locally based. The food booths were set up at the end of a street surrounding an area set up with picnic tables. In front of this area was the stage where the music and entertainment performed a variety of songs. This area was amazing, as it gave people a chance to take a break from walking all around the festival and get something to eat while listening to great music.

Though the festival did a great job in many aspects, it could have set up a map showing the list of all the vendors and where they were located. The festival was large and the booths stretched on for many blocks in various directions. A brochure could have helped people find what they were looking for more easily. It also could have given each artist an opportunity to be seen, as many of the booths that were further back had less foot traffic.All in all, the festival was an exemplary celebration of unique art forms all across the globe. I would definitely recommend visiting it next year when it comes around.