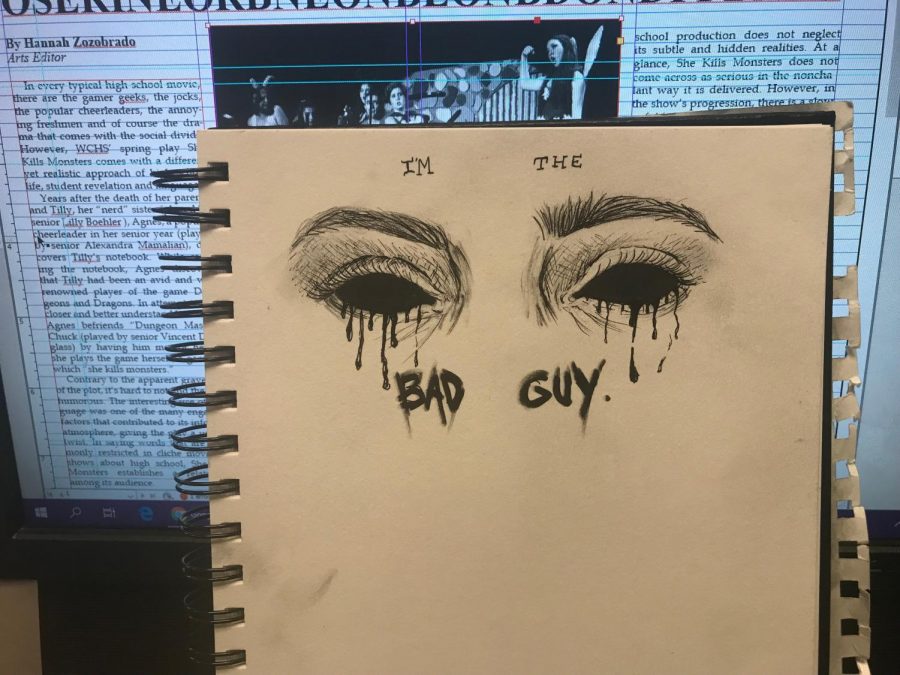 You press play and immediately hear the slurping sounds of a pair of Invisalign being taken out of a mouth as Billie presents her album. Despite the lighthearted and quirky entrance, you are quickly submerged into a world of darkness, demons, tears and pain. This is “WHEN WE ALL FALL ASLEEP, WHERE DO WE GO?”

17 year old artist Billie Eilish went viral with her song “Ocean Eyes,” and has since  become one of the most popular pop artists to date. Her blue hair, unique style and self-fashioned genre of indie-pop music with a dark, almost demonic tone, set her apart from the crowd. After the success of her debut EP “dont smile at me,” Eilish released her debut studio album “WHEN WE ALL FALL ASLEEP, WHERE DO WE GO?” in March 2019.

Since the album was released, Eilish has broken the record for the most simultaneously charted Billboard Hot 100 titles among women, beating Cardi B with 12 songs from her new album along with “Ocean Eyes” and “lovely.”

The album consists of 14 songs, including singles Eilish released earlier in the year such as “when the party’s over” and “wish you were gay.” The genre of each song switches from pop to indie to EDM-like beats with heavy bass that rejects every pop-star quota. With a well-executed mix of upbeat rhythms and slow, sad melodies, “WWAFA, WDWG” is the perfect album to listen to for any mood in any atmosphere.

After the Invisalign sound bite at the beginning, Eilish starts out the album with “bad guy.” The simple beat combined with snapping in the background and Eilish’s soft yet spooky vocals is the perfect mixture of strange, yet catchy. The autotuning of Eilish’s voice at points in the song make her sound as if she is a being other than human, adding to the mysterious aura of her music. “bad guy” suggests the joy of being evil.

According to an April 2019 Forbes article, “bad guy” is Billie’s first song to make its way to the top ten of Billboard’s Hot 100.

Songs like “you should see me in a crown” and “all the good girls go to hell” come with a similar evil, malicious message wrapped within a catchy, energizing beat. Eilish’s ability to manipulate her voice to sound so sweet yet so twisted brings shivers to the spine. In “all the good girls go to hell,” a Biblical, religious theme is carried through as Eilish states “my Lucifer is lonely…” followed by talk of the gates of heaven as “looking more like a picket fence.” The lyrics are unlike that of any other popular artists, almost criticizing humankind and making it good to be bad.

Later in the album, Eilish loses her devil’s horns and opts for a more mellow, sad tone as she digs deeper into her feelings. Her first ever song to go viral was centered around heartbreak and pain, and she goes back to her roots with songs such as “listen before i go” and “i love you.” One of the most spectacular qualities in Eilish’s music is how easy it is for her to convey emotion in her voice. In songs like “listen before i go,” sadness and remorse swallow up everything until it is as if the listener is feeling exactly what she did when she wrote the song. The thickening sound of the bass adds a stylized touch, setting it apart from the standard sad indie ballad. When Eilish utters “don’t say I’m all that matters/leave me,” the weight of her voice becomes almost too powerful to bear. Although they are sad, these songs on the album are some of the most beautifully crafted. Eilish has a gift like no other.

Overall, WHEN WE ALL FALL ASLEEP, WHERE DO WE GO? is a unique album that is worth the listen. Eilish does it once again with her thought provoking lyrics, soothing yet creepy vocals, and stylized beats that give a middle finger to the the standards of pop.