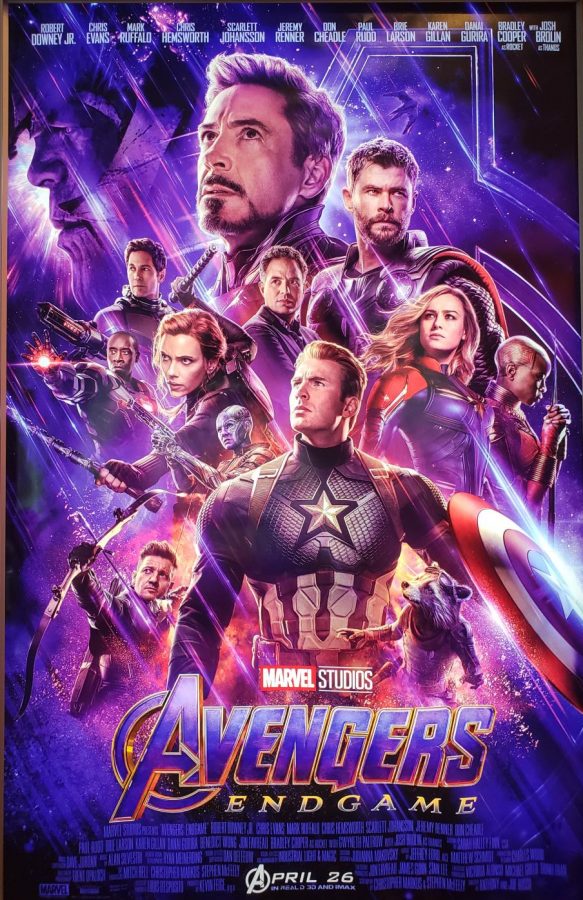 The "Avengers Endgame" poster features many popular characters from the film. Opening weekend, the movie made $1.2 billion.

At 4 p.m. on Friday, April 26, in an Arclight Cinemas theater, an audience of mostly 13 and 14-year-old boys waited in anticipation to watch what would become the biggest movie of the year. From across the theater, a true fan exclaimed, “Yo, I can’t wait to see Batman die.”

An Arclight staff member wearing the Infinity Gauntlet eventually came out and told the audience to turn off their phones and settle in for the three-hour long movie.*

From the beginning, the film was unexpected; the serene and mellow opening scene caught people off-guard as an audience member, clearly not a Marvel fanatic, even whispered, “Has it started yet?” However, by the time the Marvel intro sequence appeared on screen, it had been made abundantly clear that yes, the Endgame had begun.

In 2008, the success of the first Iron Man film propelled Marvel Studios out of near bankruptcy and into Phase 1 of the Marvel Cinematic Universe (MCU). 11 years and 21 movies worth of superheroes and intertwining-storylines later, the MCU has become the most lucrative film franchise in history, having grossed nearly $19 billion worldwide.

Marvel’s crowning achievement is the immense cultural impact of its films, something that not even Kevin Feige, president of Marvel Studios and mastermind behind the MCU, could have predicted.

Legions of fans have dedicated more than 10 years of their lives to supporting the MCU, literally growing up with its characters. Whenever word of a new Marvel film drops, it dominates social media, so much so that the internet can become a minefield of memes and spoilers.

“Avengers: Endgame” is the culmination of all this passion, which is why its release is such a momentous occasion for fans and Marvel Studios alike. The film smashed box office records with a tremendous $1.2 billion opening weekend, double what “Infinity War,” the previous installment of the Avengers, made in the same time frame.

WCHS junior Julie Winston is one of the many fans who’s been with Marvel since the very beginning. Now, over a decade later, she’s here for the end.

“I like the action of it, the thrill of it,” Winston said. “I want to see a good ending, a wholesome ending.”

“Endgame” certainly delivers an ending worthy of the cultural phenomenon that is Marvel. The character arc of each member of the Avengers continues in a way that does justice to a decades’ worth of development. A couple of heroes in particular experience some pretty drastic physical and emotional changes. The action sequences are some of the most stunning and entertaining moments in Marvel history. Even a few fan theories turn out to be true (keep and eye out for Stan Lee).

The film is a victory lap for the MCU, now in Phase 3’s final hours,🕇 that cleverly pays homage to itself just as much as it does to its fans. The emotional and thrilling trip down memory lane will have viewers crying and laughing and clapping and cheering; “Endgame” might as well be covered in wrapping paper and tied with a bow.

In the words of Tony Stark, “Part of the journey is the end.”

This epic finale is a celebratory farewell to a decade-long journey but is also a commencement. “Endgame” sets the stage for a new generation of Avengers to assemble in the next phase of the MCU.

Now, fans should look to the future; the end is inevitable, but so is a new beginning.

*Marvel uses every minute of the film’s three hour run time to pack in important plot developments, but if nature calls, take a pee break during the Hulk’s diner scene.

Feige confirmed that “Spider Man: Far From Home” will be the official end of Phase 3, serving as an epilogue of sorts to the events of “Endgame.”