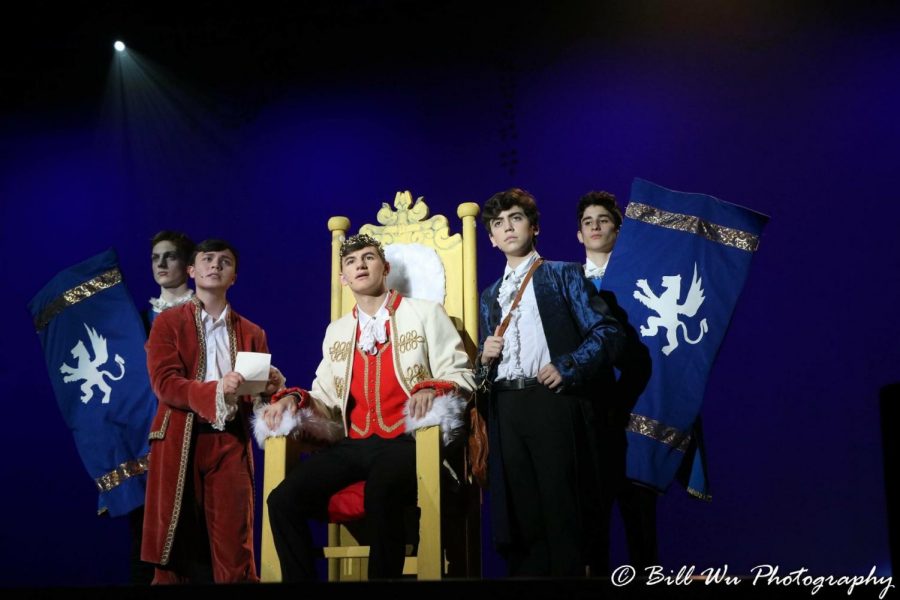 Senior Michael Votaw reels the audience in with his struggle over his identity as the prince in the opening scene.

This year, the WCHS drama department has put on the Rodgers and Hammerstein’s version of the classic “Cinderella,” and it has already proved to be one of their most spectacular productions to date. Between the talented cast of actors, beautiful stage sets and entertaining performances, this show is certainly one to remember.

Premiering Nov. 30 after a teaser during the school day Nov. 29, with additional performances Dec. 1, 2, 7 and 8, the musical has already succeeded in drawing in an enormous audience of WCHS staff, students and families. Along with maintaining a positive crowd reception, “Cinderella” excels in representing the main cast’s skills in acting, dancing and singing, as well as dedication to their craft.

The plot of the musical follows the well-known Cinderella storyline, while adding some modern flare into the mix. Ella, the main character, lives a poor life and is treated as a servant by her step-mother and step-sisters, but in an attempt to meet the prince, she attends Prince Topher’s ball, which sets the stage for the rest of the musical. This story is both easy to follow and engaging to watch, making it a hit with the audience.
The cast of “Cinderella” includes some of the most talented students to perform in a WCHS production to date. The roles of Ella and Topher, played by junior Heather Kirschner and senior Michael Votaw, showcased the performers’ amazing theatrical abilities. The same can be said for the whole cast, with many memorable acts and songs throughout the entire show. After the musical had ended, the main cast remained on stage to take photos with young audience members, making their performances feel even more genuine.
Some of the most interesting aspects of the musical were the clothing and costumes that the cast wore. The gorgeous dresses and immaculate uniforms allow for a better sense of immersion within the world of “Cinderella.” There were even a few moments in which specific cast members performed on-stage costume changes, which were breathtaking to say the least. The great costumes and makeup make it feel as though one is watching a professional Broadway musical, which is quite impressive for a high school production.

Along with the cast featured in the musical and the costume department, the dedication of the WCHS tech crew cannot be stressed enough. From the lighting and sounds to the painting and unique props, it is clear that the tech crew poured their hearts into making sure that “Cinderella” was as appealing to the eyes as it was to the ears. It should also be noted that, for the first time in recent years, the musical featured movable set pieces, a feat clearly demonstrating the tech crew’s efforts to ensure the musical is as fluid and polished as possible.

While the musical was incredibly entertaining and well-directed, no production is without flaw. The show featured the occasional technical difficulty with a malfunctioning prop or costume, but nothing major was immediately noticeable to the average audience member. Overall, these few hiccups did not distract from the musical’s otherwise stellar quality.

Ultimately, “Cinderella” was a massive success for the WCHS drama department, and it will be quite the challenge for them to top this production next year. If this musical was any indication, WCHS will have the privilege of featuring many more talented acts for years to come.