WCHS students travel back in time at MD Renaissance Festival 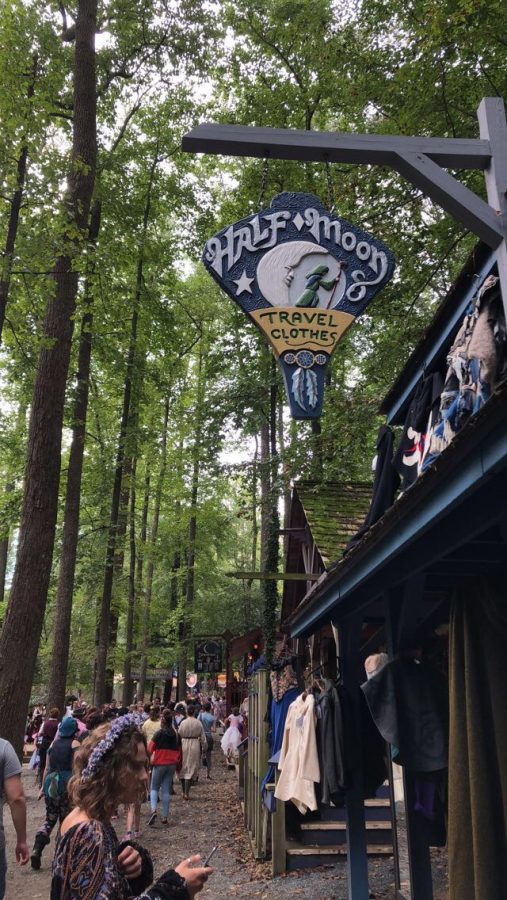 Renaissance-themed costumes are one of the many items sold at the festival.

With the weather finally signaling the start of fall, many students are looking for ways to go out and enjoy the autumn air. While pumpkin patches are a must, many students have been travelling a little farther away to a land of princes, princesses, elves and fairies.

The Renaissance Festival of Maryland is annually held in Crownsville, Md, and allows people to escape the hustle and bustle of the 21st century to become a villager in the 14th century. Complete with entertainment and booths of artisans selling various foods, homemade swords, masks and jewelry, the Renaissance Festival is a unique and exciting place to visit with friends while the leaves are changing.

“My favorite part [of the Renaissance Festival] is the general atmosphere,” senior Vincent Douglass said. “It is a very lively, jovial vibe.”

The festival gives local artists a chance to put their work on display. Walking around the fair, students can find anything from fur pelts and magic wands to wings and engraved coins from different countries. Not only is it a festival, but it is also an art gallery for woodcarvers, potters and printmakers.

According to the Maryland Renaissance Festival, this year, vendors at the festival include silk scarves, buffalo moccasins, blown glass and tankards.

Along with the artisans, the Renaissance Festival houses performers put on Shakespeare plays and showcase acrobatic tricks in multiple locations throughout the park. When students are not perusing the shops, they can watch festival actors perform dramas or comedy.

One of the most interesting parts of the festival is getting to see the intricate costumes; it is like walking in a Halloween town. While sweaters and boots are the uniform for most autumn activities, at the Renaissance Festival it is encouraged to dress as if one is part of the Renaissance. People often dress up as villagers, royalty or magical creatures. Some visitors put in an insane amount of effort into their costumes, wearing a full suit of armor or metal dragons perching on their shoulders. While dressing up is not mandatory, there are costume shops if one opts for a last minute outfit change.

“I started dressing up a couple years ago,” Eyles said. “I think it’s fun because you never get any other opportunity to dress up like that and it also really immerses you in the experience.”

With a variety of food stands selling everything from vegan rice bowls to “Steak on a Stake,” there is something to eat for every dietary restriction. Other options like turkey legs and apple cider give the festival cozy, autumnal vibes.

The Maryland Renaissance Festival is a special way to enjoy the cool weather and changing leaves with friends. The festival  ends Oct. 21, and tickets often sell out fast, so embrace the chance to be a Renaissance era villager before the village disappears for another year.

“It is a wonderful fall activity because you get to go outside and enjoy the good weather while also having fun and learning about a different time period,” Douglass said.