“Before My Eyes” is a must-read for CHS students 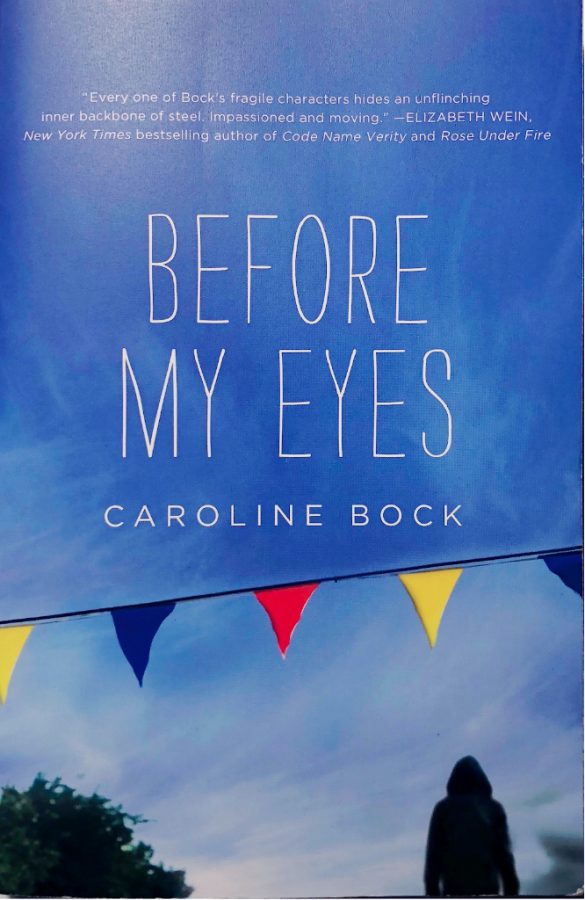 "Before My Eyes" is explores the motives of a gunman pulls out a weapon at a Labor Day campaign rally for New York state senator.

In Before My Eyes, author Caroline Bock perfectly captures the societal problems of today, by weaving her story very closely to reality. It is a new thought-provoking young adult novel featuring the lives of three teenagers whose lives were forever changed after being held at gunpoint.

Sweet, young Claire, 17, has spent the summer months taking care of her little sister, Izzy, as her mother recovers from a life threatening stroke and father struggles to keep a roof over their head. She wants to believe she is in control and that her life is stable but while browsing online, she meets “Brent.” Brent appears to be a charming spirit who comes to sweep Claire off her feet and distract her from her stressful life.  However, when she meets Max, the awkward senator’s son, her feelings become more than complicated.

Max, 17, and son of the state senator, has been working a back burning job at a beachside Snack Shack all summer in order to help his father look more like a “common man” with a “common family” for his reelection campaign. With the stress of the campaign and the neglect he feels from his parents, Max has been popping his father’s painkiller medication to an excess. His parents, who are more involved in the campaign than their son’s life, fail to see what is happening to him.

Working alongside Max at the Snack Shack is Barkley, 21, who suffers from paranoid schizophrenia. No one knows that Barkley is mentally ill and has been hearing voices inside his head, until one day the voice tells Barkley to pull out a gun at the senator’s labor day campaign rally.

Readers not only get to see inside Barkley’s mind, but they also feel the horror and sympathy as he struggles to understand the mental illness he’s not even fully aware of having. We also get to see inside the mind of Claire, who is the girl Barkley is infatuated with, and his co-worker Max. Max also shares the same romantic feelings as Barkley towards Claire, making the tale even more complicated.

Before My Eyes is a novel exposing what everyone is afraid to talk about. The characters are well thought out with flaws that make the story more realistic. They experience hardships that the audience can relate to and have romantic drama like anyone else.

It takes a brave author to address these kinds of dark subjects in their writing and to go into the mind of a shooter. Most of the time, it was hard to read Barkley’s point of view due to all his troubling and dark thoughts, but it only added more of reality to the novel, making it more believable.

Bock uses simple vocabulary making it simple for every mind to understand while also writing in a very descriptive tone in order to bring life and reality into the novel. She writes in a different language for each character exposing each of their personalities and character.

Most people’s perception of teenagers are that they are rowdy, irresponsible and rebellious. But Before My Eyes denounces all those stereotypes and addresses the fact that teenagers do have problems like adults and do suffer from problems, such as depression, stress and loneliness.

If the story only took place in one perspective, it would lack the maturity and the complexity Bock has created in Before My Eyes. The book would have had a very fake one dimensional plot. By having multiple perspectives, readers not only gets more pages to read, but understands that each character is a human being and has hardships of their own.

The novel is both intriguing and page-flipping with a whole roller-coaster of character driven drama that spans a long summer. However, the build up to the plot in this novel is sluggish; it takes a couple of chapters for readers to have a full understanding of what is happening.

Before My Eyes has relevance to the problems in society today. It addresses multiple issues many people are afraid to talk about openly. Reading this novel will force people to finally confront serious issues like gun violence and depression.

Before My Eyes is a short summer read or a breeze-through paperback, but it is definitely a YA novel that will have people talking and will definitely not be easily forgotten.