This is Sahara: CHS alumna shoots for stardom 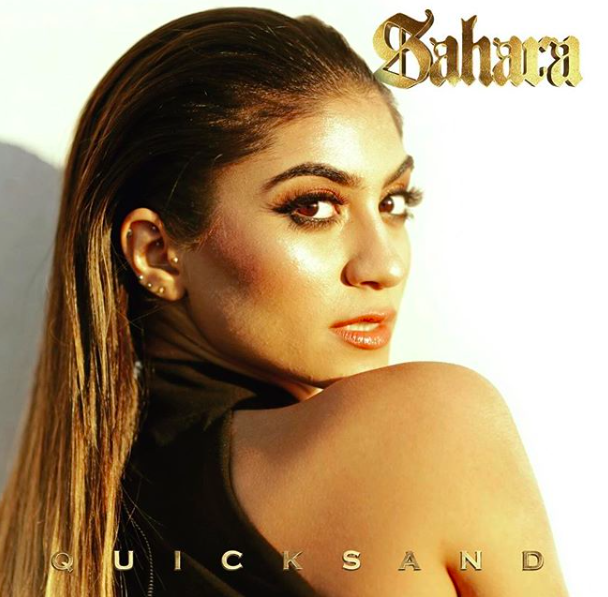 Mokhtari released her single, "Quicksand," along with a music video Jan. 8, 2018.

Since she was three years old, current University of Maryland sophomore and 2016 CHS alumna Sahara Mokhtari has been singing along to all of her favorite tunes. Since she was ten years old, she’s been writing original songs, merely dreaming of the day that she would hear her own song play over the radio. But now that dream has come true.

It all started many years back while Mokhtari was a student at CHS. She had been singing for years, but finally decided to post her cover to the song “Wrecking Ball” by Miley Cyrus on YouTube during her freshman year.

“After that, I got chosen by Elite Daily Magazine as ‘Top 5 Best Covers in 2013,’” Mokhtari said. “I started getting emails from producers off YouTube. My parents were always very supportive of it.”

Her career really started off in a way that she hadn’t expected: she was asked to do an interview with Spanish TV networks like Buenos Dias TV and Univision about her rising success, despite the fact that she was not a native speaker. However, she had been studying Spanish for years through MCPS, considering herself fluent in the language by that point.

“You could tell she really liked Spanish,” AP Spanish teacher Stacye Steele-Yue said. “She would always come in for extra help to make sure she got it right. A lot of students will come back and say ‘I traveled and used Spanish’ or something like that but not everyone can say they’re using the language in their work industry.”

These interviews on Spanish networks prompted her first big gig as a performer in the “Latin Explosion” show at the Patriot Center, where she sang a half English, half Spanish song cover.

“My minor now is Spanish and I use it a lot for music to produce some translation songs,” Mokhtari said. “I want my music to have no limits. I want to avoid a barrier between me and my listeners.”

As Mokhtari’s career kicked off, she continued to record music throughout high school, playing more and more DC venues, including Echostage. Since then, she’s worked under the management of both DJ Khaled’s and Akon’s teams, as well as the producer of Lady Gaga’s “Fame” album.

“The other students would get excited for her,” Steele-Yue said. “They were fascinated.”

Through all of this, Mokhtari made sure to keep up with her school work at CHS, even balancing it with six honor societies, the position of Poms captain her junior year and a student government officer position.

“She wouldn’t just say ‘I’m making the A anyway, I don’t need the help,’” Steele-Yue said. “I know she was coming in for help in a lot of classes to make sure she understood what she was learning. That kind of focus is probably what allows her to get ahead in the industry.”

Under the name “This is Sahara,” Mokhtari has been working on her career while juggling a pre-medicine track and the position of VP community service of the Kappa Delta sorority at UMD.
“A lot of what high school taught me was time management,” Mokhtari said. “I was juggling everything at once — AP courses, clubs, etc. I’ve learned that taking on so many responsibilities, although very time consuming and difficult, is worth it.”

Mokhtari released her single “Quicksand” Jan. 8, 2018 on iTunes and Spotify, and a professional music video to accompany it Jan. 10. She worked with videographer Raw Cinema to come up with a concept for the video, which they shot in California. The video tells the love story between two people, switching between scenes on the beach and in a desert-like backdrop, a play on her name “Sahara.”

“It showcased the song and lyrics in the perfect location,” Mokhtari said. “It’s a love story without being too involved. You get the sense of it without it being too much about the love, but about the lyrics as well.”

Mokhtari hopes that her audience relates to her lyrics so that each person could “sing it as if it were their own.”

The video debuted on Fox 5 as well as on her Instagram and Twitter accounts named “this_is_sahara.” Recently, her music was played over radio stations 94.7 and 95.5.

“She’s one of those kids who could have done anything,” said CHS English teacher Christin Nixon, who taught Mokhtari her freshman year. “It would have been easier for her to take a less original path. But she doesn’t take ‘no’ for an answer. It’s not a possibility for her. She’s determined to rise and prove those who said she couldn’t do it, wrong. But even through all of this, she’s extremely humble.”
Mokhtari has already used her talents towards philanthropy, often working with the Make a Wish Foundation and Girl Scouts of America.

“A big part of being an artist is to not forget those who are supporting you,” Mokhtari said. “I want [my music] to make people think about things in their own lives, but also how they can help one another. I want the buzz around my music to shine a light on giving back and being role models for the youth.”

At CHS Mokhtari was the president of Friends of Friends in Need, a club that provided multiple foundations and shelters with high school volunteers. It was then that she began committing herself to community service. And more than that, she learned important lessons about balancing work and passion.

“Churchill is an atmosphere where drive and grit is encouraged,” Nixon said. “When you develop a passion, it’s easier to take risks here.”

While Mokhtari prioritizes her music, she divides her time each day in a way that allows increments for both writing songs and working on schoolwork. At some point, she’s considering medical school. But for now, making it big in the music industry is in the front of her mind.

“I’ve been able to get all my lyrics down and then see it all come to life,” Mokhtari said. “To then add [my songs] to my own playlists, where I have all my own favorite songs, is crazy.”