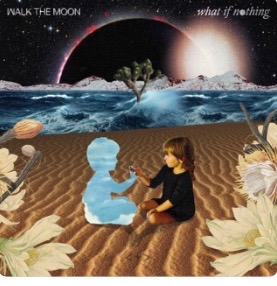 “What If Nothing” is actually “something” worth listening to if you are a fan of Walk the Moon.

This new album is their first in three years since “TALKING IS HARD.”  “What If Nothing” mixes sounds from what feels like two totally different worlds, and brings them together to create something that feels like it’s from another dimension. And while this could have gone all wrong, Walk the Moon is full of amazing surprises.

Typically Walk the Moon keeps to a pretty stable style that incorporates a 90’s pop vibe. But on “What If Nothing,” they really change it up. This album features a ton of electronic, synthetic style beats that you would never expect from an alternative band. With the band’s very solid vocals mixed with these beats, they create songs like “Press Restart,” “Tiger Teeth,” “Sound of Awakening,” and “Lost in the Wild,” that are transcendent and dynamic.

But Walk the Moon sticks to its 90’s-style alternative roots with songs like “Headphones,” “Can’t Sleep (Wolves),” and “All I Want.”  The band gives their fans the music that it’s known for, and they never disappoint even when they are playing it safe.

And then there are the songs where these two sounds collide. These are bangers that really stand out. Songs like “One Foot,” “All Night,” and “Feels Good to Be High,” contain the perfect blend of 90’s pop and futuristic synth that create a perfect mash-up. These songs are the hits –  the kind that you can’t help but sing out loud to.

Of course every album has its downfalls and this holds true for “What If Nothing.” There are times that the two styles clash and don’t compliment each other well. “Surrender,” and “All I Want,” are examples of songs that try to make the sounds work together, but end up making something that doesn’t hit the ears right, and at times can be anticlimactic.

This flaw is minor and only applies to a few of the songs. Most of the album is great new music that will not disappoint Walk the Moon fans.