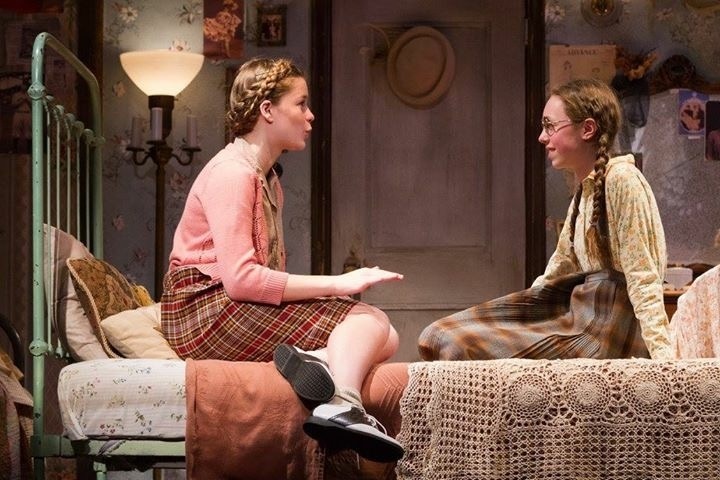 CHS Sophomore Josie Bourelly performs at a variety of area theatres which could be impacted by budget cuts.

By Nora Holland and Dani Miller, Arts and Opinions Editor

In March, President Trump released his proposed outline for the 2018 budget. Trump’s new budget includes spending cuts for many government programs such as National Aeronautics and Space Administration (NASA) and the National Endowment for the Humanities (NEH).
Trump has proposed a 52.3 billion dollar increase to defense spending for 2018, which would eliminate funding for 20 smaller agencies, including the National Endowment for the Arts (NEA). The NEA provides Americans with opportunities to express themselves through art and strengthens the creative capacities of communities across the nation through funding and giving grants.
“[The arts programs are] a haven,” sophomore Josie Bourelly said. “They are a safe space and it’s this entity in which I can truly express myself.”
Not only would the elimination of this program affect arts programs all across the country, but it would impact programs all across the D.C.-Maryland-Virginia (DMV) area that CHS students partake in. This would include venues such as the Arena Stage, a Tony award-winning local theatre, and Split This Rock, a Washington-based nonprofit poetry organization that coordinates many youth poetry programs and competitions.
“Our NEA grant this year is about 12.5 percent of our overall budget,” Split This Rock executive director Sarah Browning said. “It’s funding some of our youth programs, after school poetry clubs, Louder than a Bomb, and the DC Youth Slam Team.”
Another local establishment Trump’s budget cuts would affect is Arena Stage. Famous for the performances it presents each season, Arena inspires young artists and serves as a place for students to express themselves. This popular theater has many programs for students pursuing the arts, such as the Voices of Now, a festival of plays written and performed by students, the Musical Theatre Training Company, Camp Arena Stage and various other workshops and internship opportunities.
Arena Stage also allows a certain number of D.C. public schools to apply for D.C. Ticket Partnership. This allows students to get tickets to Arena Stage shows at a cheaper price, exposing them to theatre and the arts and the ability to interact with Arena artists and professionals.
“In terms of direct impact, Arena receives grants for shows [from the NEA], primarily new plays, and that funding would be lost,” Arena Stage artistic director Molly Smith said. “If a source of contributed income is lost, we have to find another. But this funding is critical for our colleagues as well.”
Even CHS students who don’t participate in the particular arts programs funded by the NEA will subsequently be affected by Trump’s budget proposal.
According to a study conducted by the Public Library of Science, producing and consuming art increases brain activity and improves psychological resilience as it triggers parts of the brain that usually aren’t triggered by maths and sciences.
Thus, access to arts programs increases intelligence for all students, not just those participating in the organization. It especially benefits students who have trouble learning by the traditional common core curriculum.
“So many young people don’t respond well to traditional education so for those young people it’s there for them to find their voices, to channel their frustration in a positive way and to become role models,” Browning said.
As much as the arts help the brain develop inside the classroom, it also helps people and their communities grow outside of school.
“[The arts] have helped me learn to be patient,” Bourelly said. “They have helped me learn to listen. They have exposed me and allowed me to befriend incredible people.”
Despite the immense power that the government and the President may have, Browning is not letting any political figure hinder her fight for continued abundance of the arts.
“I was at our city hall encouraging our members of the city council to increase the funding for the D.C. commision on the arts and humanities.” Browning said.
In addition to attending city hall meetings, Browning has been encouraging people all over the country to call their local congressional representatives and express their support for the NEA.
“We have been giving [supporters] talking points and we have been telling them who the key members of Congress are,” Browning said.
All the economic and educational reasons aside, the arts play an important role in people’s’ everyday lives.
“Art has to be experienced to be understood,” Smith said. “If the arts start to disappear because there isn’t enough funding, the world will lose part of what makes life worth living.”