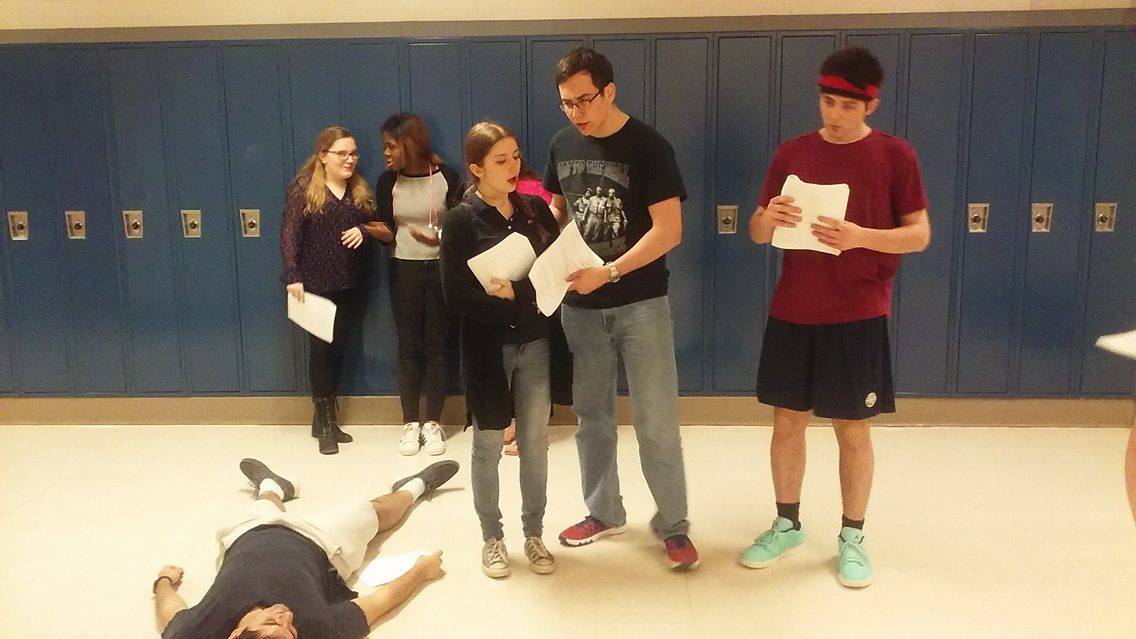 CHS students rehearse Remington Steele’s scene that he wrote himself, a comedy about a bumbling detective.

Picture a fantastic theater production complete with detailed costumes, spot-on makeup and beautiful lighting. What would you say if you learned that the entire show was produced and directed completely by students?

That’s exactly what CHS’ “One Acts” student-run play festival is, a night of scenes that are produced, directed and performed by students. Not only is the audition process for One Acts extremely low stress, the festival is a great way to test out theater without being overwhelmed with extensive rehearsals.

“One of the best things about One Acts is that every student who auditions gets a role,” said senior Taira Dolan, who is a director and co-producer of One Acts, as well as the Drama Club president. “It creates an opportunity for students to show off not only their talents, but [their] great ideas.”

One Acts is an extremely unique experience. Each act runs a duration of between ten and thirty minutes. Students can be assigned roles that range from small to large in the acts.

“It’s really great to see people who don’t normally act open up on stage,” said senior tech director and co-producer Izzy Rayner. “I love working with people who I don’t normally work with in theater.”
Because the acts are much shorter than a two-hour play, One Acts requires less preparation. The process starts with auditions.

“[To audition for One Acts], you sign up, then go to the drama classroom after school on audition day,” junior cast member Laura DeMarco said. “You don’t have to prepare anything because the student directors [provide] you [scripts] to read. No stress, no mess.”

Auditions for this year’s scenes were held in March, and the cast and crew have been preparing ever since.

“[One Acts] starts off as a slow process, just gathering ideas, talking to other directors and planning details,” Dolan said. “Because of limited time and space, each scene can only rehearse three times a week, with Spring Break cutting into the middle of our rehearsal schedule.”

Students rehearsed their scenes on Mondays, Tuesdays and Thursdays after school for the month of April. Each rehearsal usually lasts around an hour. During rehearsal, two directors run through their act at the same time, one in the theater room and the other in the nearby hallway.

“Another great thing about One Acts is the workload,” De Marco said. “If someone wants to start doing theater, but is worried about balancing their workload, One Acts is the perfect place to start.” This year, five scenes are being performed and each scene has a different director.

“[I enjoy] being able to work with the actors,” senior director Remington Steele said. “Everyone in the cast is very talented and full of potential. Working with them is just a barrel of laughs. We all have fun together.”

Students who don’t prefer to perform on stage can still participate by writing their own scenes for their peers to bring to life.

“The scene I wrote is about a bumbling detective who, with help from the chief of police and the police force, [attempts] to solve the mystery of an estate owner’s murder,” Steele said. Having personal connections to the writers and directors builds camaraderie among the cast.

One Acts debuted on April 21st at 7 p.m. and attendance was free for all. To keep in mind for next year, students can enjoy light-hearted fun and quality laughs while supporting their peers at the show.