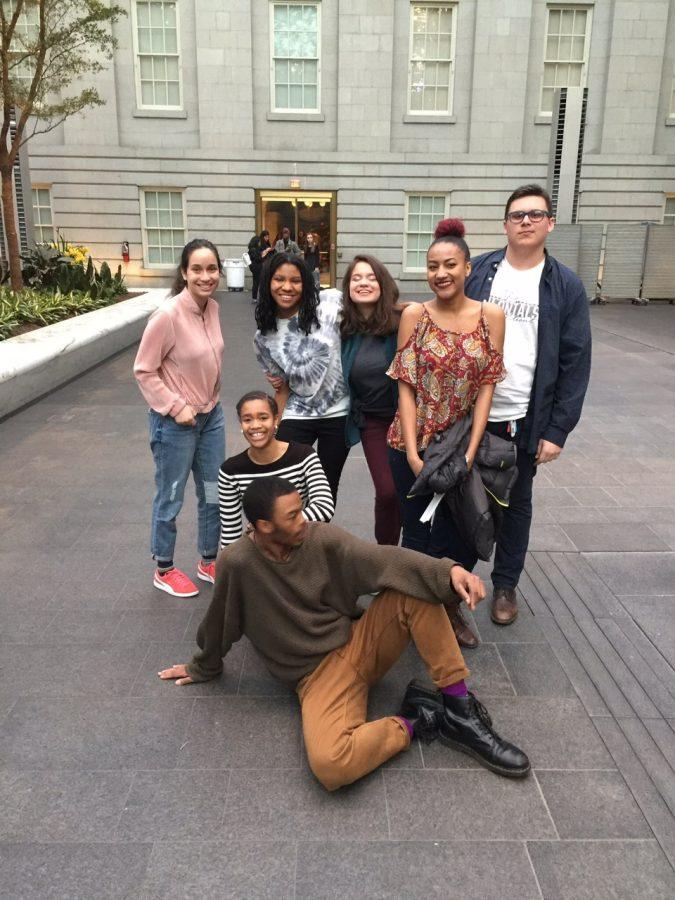 Dani Miller with fellow competitors at a semi-final round to compete for selection on the DC Youth Slam Team.

Whenever one thinks of slam poetry, their first thought is most likely of the iconic slam poetry scene in the movie 22 Jump Street and yet there’s still so much unknown about the art.

Every year, there is a competition for people in the DC area to get on the DC Youth Slam Team, a slam poetry competition team of the best poets in the DMV. DC is notorious for having amazing poets, thus the process to get on the team is quite rigorous and includes two qualifying rounds, a semi-finals, and a finals. This year, CHS sophomore Dani Miller placed second in the semi-finals and is moving on to the finals round where she will perform March 25, 2017.

“To be able to read my poetry to an audience is a feeling that no words have the magnitude to describe,” Miller said. “People write about the most personal moments of their lives sometimes and what separates spoken word poetry from other forms, is that instead of writing about it and moving on, spoken word artists have to revisit that memory and those feelings every single time they perform [a piece]. It has the power to break as much as it has the power to heal.”

The DC Youth Slam Team, which Miller is competing to be a part of, is a year long program for teens to compete and share their slam poetry.

According to splitthisrock.org, a site for poets to find public events to share their work, the DC Youth Poetry Slam Team teaches and empowers teens to speak up about issues of social justice through poetry. The team also helps train and develop teens’ talents in regards to slam.

For Miller, the audience and the acceptance in regards to her ideas and opinions is just as rewarding as expressing herself and confronting the past.

“The thing is, for me, performing in front of people is kind of validating,” Miller said. “There aren’t many spaces where the opinions and the problems of young people are taken seriously. I feel like I’ve found people who actually listen and care about what I have to say every time I get up on stage and perform. Even though I’m performing in front of strangers, I’m sharing a part of myself with them and they’re accepting it. I make a connection with the audience that only exists through art.”

Stage fright has to take a backseat for Miller when she competes, and at the finals, Arena Stage will be a whole new experience.

“I’m looking forward to performing at Arena Stage because I’ve seen so many amazing shows and it’ll be surreal to stand on that stage in front of so many people,” Miller said. “It’ll be the most amount of people I’ve ever performed in front of, so that’s exciting but also super nerve wracking. I’m also excited to see all the people I’m competing against again because they’re really cool, and we’re all super supportive of each other already, even though we’re competing. We help each other practice and perform better. I can already tell the team is going to be a family no matter who makes it.”

Sometimes great things just happen and when comes to slam poetry, Miller merely stumbled upon it before taking a liking to it and taking it up as a hobby.

“I’m inspired by slam poetry all the time,” Miller said. “I got into slam poetry by chance, after seeing a video on YouTube, and I felt so inspired by it. It was ‘What Guys Look For In Girls’ by Savannah Brown. It was so compelling, so relatable and so heartbreaking. I’ve always loved to write and I just thought it was so cool, so the more poems I watched, the more I wrote. It kind of happened naturally.”

Miller’s diverse range of topics along with her creativity and her view on the world contribute to her talent and her slam pieces that have the ability move an audience.

“I write a lot about problems I see in our society, because there are a lot of places where it is discouraged for a young person to discuss their politics or people just assume we don’t care about what’s going on in the world,” Miller said. “To put it simply, we see and we care, and writing what we see is a great way to process the world right now. I also write about whatever’s bothering me, and whatever I need to get it of my head. I write about boys, my family, my insecurities, my friends, I write about music. I have poems about nihilism and I write about other people. It’s a great way to express yourself and it can be cathartic.”

Miller is a part of the CHS Slam Poetry club and shares many of her poems in front of the group during club meetings.

“Dani shows a lot of passion and attempts to attack topics that others feel like ignoring,” English teacher and Slam Poetry club sponsor Christin Nixon said. “I’m incredibly proud [of Miller] and encourage everyone to go to Arena Stage and watch [her perform].”

Competing and stepping out of her comfort zone has helped Miller in more ways than just improving her writing.

“I never thought that I would be this close to making the team,” Miller said. “I’ve watched videos of people from the team for so long and I’ve admired so many DC Youth Slam Team alumnus, so it’s crazy that I could be in the same position as the people I look up to. It took a whole lot of convincing from just about everyone to even get me to try out in the first place because I was sure I wasn’t good enough but now that I’ve gotten this far, as surprised as I am, I’ve learned to doubt myself less.”

Miller’s experience of participating in this competition and coming so far has been rewarding in all senses of the word.

“The most critical person of my poetry is myself,” Miller. “Even at the semi finals, the first thing I did when I got off stage was tell my friend I messed up, and then the judges gave me a 9.8/10. Regardless of whether or not I make the team, I’m proud of how far I’ve come and I’ve already learned so much about poetry and met so many amazing people through this which I will always be thankful for.”