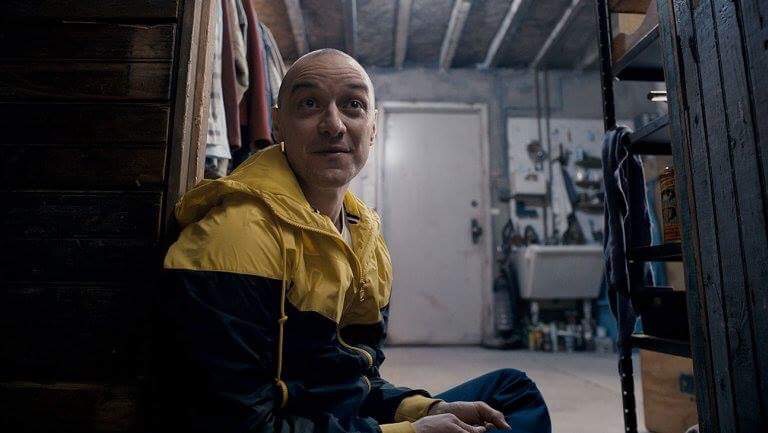 One of Crumb's personalities, Hedwig, sits on the floor during the movie.

I was under the impression that Split would be closely related to a horror movie. Surprisingly, it was anything but. Split is centered around a main character with dissociative identity disorder (DID) and three girls, Casey (Anya Taylor-Joy), Claire (Haley Lu Richardson) and Marcia (Jessica Sula).

The three girls are kidnapped by Dennis, one of 23 personalities in the mind of Kevin Wendell Crumb (James McAvoy). Emotions trigger the personality switches of Kevin Wendell Crumb, who can flip between a fashionable fay man to a young child in a matter of minutes. The main story line focuses on “The Beast”, Dennis’ supposed twenty-fourth personality, who has supernatural powers and how he plans to kill the girls. Instinctively, the girls are terrified and plan different ways to leave, finding trouble along the way.

McAvoy does a terrific job of portraying a character with different personality disorders, never seeming uncomfortable as any personality, such as a woman or nine-year-old boy. To me, his acting never fell short and constantly had me wondering “what is going on in this man’s mind?”

My favorite scenes were ones of Casey, the outcast of the three girls, and her flashbacks of herself and her dad on a camping trip. At first, I thought the flashbacks were meant to show her yearn towards nature, due to her not being able to see the outdoors. As the flashbacks progressed, more of Casey’s life unraveled, showing how difficult and traumatic her childhood truly was. I don’t think anyone realized these flashbacks would end up saving her life, causing a shock for everyone, especially myself.

Another positive note about “Split” was the good balance of the girls’ fast-paced lives and how they try to escape with Crumb’s daily visits to his therapist, Dr. Karen Fletcher (Betty Buckley). It helps give more insight into Crumb’s complicated mind and his daily struggles, while not focusing too much on one character, allowing the constant build up of suspense.

Though “Split” certainly had its scary moments, the movie is not as frightening as people make it out to be. In my opinion, the only spine-chilling moments were those when “The Beast” made an appearance (and those scenes were in the much latter half of the movie). I have much enmity towards horror movies but “Split” was certainly a movie I enjoyed throughout.

I was under the initial impression that Split would have a cliché ending where the girls escaped without a scratch. I was wrong.

“The Beast” ends up killing Claire and Marcia, ready to prey on Casey. Before “The Beast” confronts Casey, she reads a note from Crumb’s therapist (Betty Buckley) telling her to say his real name, Kevin Wendell Crumb. When she does this, it brings Crumb back to his normal self, lost and confused, believing it’s 2014. Crumb tells Casey to kill him before “The Beast” resurfaces. In my opinion, this scene was heartwarming and absolutely necessary. It shows the reality of how this disorder can impact someone’s life and the damage it does to one’s mind.

As “The Beast” is about to kill Casey, he notices the cigarette burns and scars along her body, letting her go because she has suffered and those who suffer are “clean.” These scars connect back to Casey’s earlier flashbacks in the movie, creating a detailed story line.

I would give the movie a solid 4.5/5, a great movie with phenomenal acting and a good look into the mind of someone with different personalities.