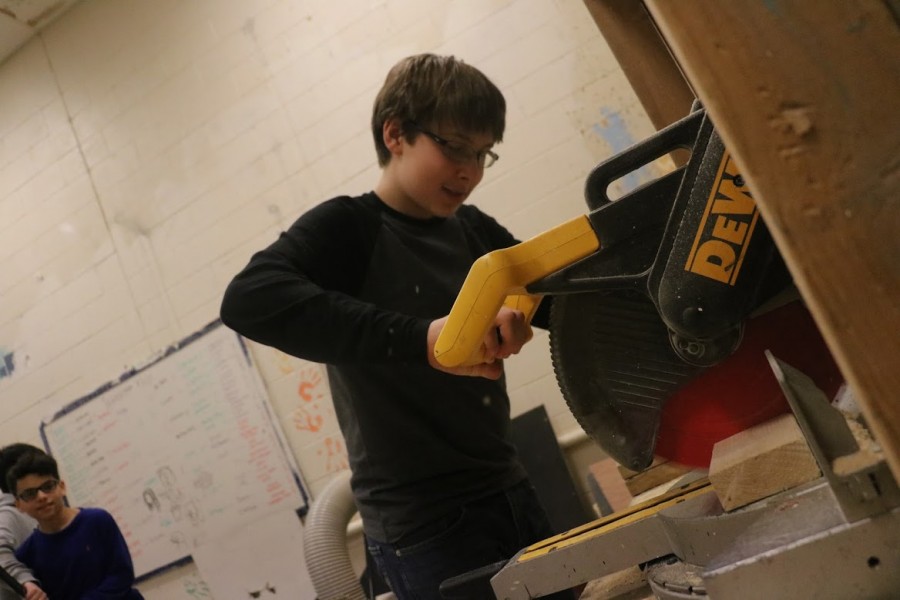 Freshman Ethan Finke uses tech power tools to cut a piece of wood that will help finish the set design.

It’s the night of the big show. As the actors bow to a deafening applause, tech crew stands stage left, watching.

I may have only joined tech crew this year, but I’ve wanted to join since I was a freshman. I thought I understood the amount of work that the tech crew put into each production, but I had no idea. From building the sets, which involves a lot of power tools and is not as easy as it looks, to setting up sound and lights, it’s a long and difficult process.

Here at CHS, the theater department has the privilege of having the resources to be able to put on several shows each year. Yet, I find that few people actually come to see the shows we put on, or appreciate the amount of work that goes into each show, especially from a behind-the-scenes perspective.

Imagine spending weeks building and painting sets, and the day after the last performance, tearing it all down. That is exactly what tech crew goes through each production.

As someone who has grown up loving theater, I often forget that not everyone understands the benefits of supporting those in the arts.

According to a 2015 PBS Parents article, involvement in the fine arts has many positive impacts on student learning. It engages students and helps them become more culturally aware. Involvement in theater arts also helps students with their interpersonal relationships and social and academic skills.

The most popular show at CHS is Blast. Blast is a long-standing tradition at CHS and a lot of work goes into it. It makes the choral department a lot of money and is an amazing production, but it shouldn’t overshadow the other productions. Blast is not the only production at CHS.

When I tell people I’ve been doing tech crew after school, they ask me how Blast is going. When I tell them we’re still working on the winter play, I get a puzzled look—“What play?”

Tech crew has a lot on their plates in the winter to spring season because they have to make and put up the sets for both the winter play and Blast. There are people who have to go from play rehearsal to Blast rehearsal, or have to pick which one to do.

Sometimes, tech crew doesn’t have enough time to do it all, so they prioritize Blast over the winter play.

According to theater Technical Director Ben Schnapp, CHS spends significantly more money on Blast than the musical and play, partly because Blast brings in more revenue.

Blast deserves the attention it gets. But some people need to realize that the winter play and Blast are different, well-produced productions and deserve equal attention.

Sporting events are considered huge school events where you’re intended to come support the school and show you have spirit. The theater productions should also be considered school events. At the pep rallies, we cheer for the sports teams, not for the cast of the musical, play, or Blast.

Our plays are already high quality. Imagine how much more we could support our young artists if more people came to see the shows. More attendance means more funding, which leads to better shows.

You should come out and support your fellow students, not only because of the amount of work they put into each show, but because it is not easy, and the performances are very high quality as CHS is home to great theater talent.

Supporting these shows will not only help build up our school’s theater department, but it will also impact your life. Theater enriches your life.