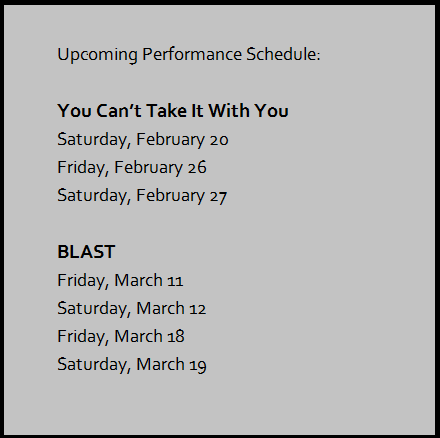 You Can’t Take it With You is a comedy about two families whose son and daughter get engaged and all of the crazy events that ensue.

The play will feature Areya Campbell-Rosen as Penny, Remington Steele as Grandpa, Josie Bourelly as Alice and Griffin Godsick as Tony.

Theater teacher and director Naomi Ratz was in a performance of You Can’t take it With You when she was in high school and is looking forward to bringing it to CHS.

“I did this play when I was in high school and it stuck with me,” Ratz said. “I loved doing it, and it was really funny.”

You Can’t take it With You promises to bring many different elements of theater performance to the stage.

“The audience can expect hilarity, bad ballet dancing, good Russian accents, fireworks, tax evasion and a xylophone,” Ratz said. “If that doesn’t pique your interest, I don’t know what will.”

While that might seem far away, the cast and crew have already started working on the production.

Auditions were held the week of Nov. 16 and rehearsals began Monday Dec. 14.

“We’ve got a great cast and an awesome theme,” senior and Blast vocal captain Natalie Hwang said. “I’m excited for my last Blast.”

This year more focus has been placed on dance in the production. A dance-only audition was held this year.

Audiences can expect to hear modern, popular sings along with some well-known older songs.
“There will be more variety of dance styles and more modern songs,” junior and Blast dance captain Madeline Statter said.

Students will play a huge role in planning and arranging many of the aspects of Blast. Students will create musical and vocal arrangements, as well as costumes and sets/lighting.